To protect against sham peer review, court must uphold verdict

Physicians are urging a Pennsylvania appellate court to guard against peer review abuse and uphold a verdict in which jurors found that a hospital employing a gynecologist did not give him proper due process before he was fired.

After two decades in the court system—and hospital actions that made it very difficult for the doctor to find a new job—a Pennsylvania jury awarded Terrence E. Babb, MD, $5.5 million. The jury and trial court concluded that Dr. Babb proved he had an employment contract with Geisinger Clinic, that the hospital breached the contract, and that Dr. Babb suffered economic injury as a result.

The decision is an important one to uphold because a hospital must comply with “procedures mandated by statutes, both for the benefit of the physician as well as for the benefit of the public at large,” the Litigation Center of the American Medical Association and State Medical Societies and Pennsylvania Medical Society said in a friend-of-the-court brief filed on behalf of Dr. Babb in the Superior Court of Pennsylvania Middle District. The Superior Court, Pennsylvania’s intermediate court of appeals, is considering the case after the hospital appealed the verdict.

Right to defend yourself

At his trial, Dr. Babb showed that the hospital told him his termination was a business decision, under which he would be entitled to an Involuntary Review Process. He also demonstrated that the hospital first raised questions about his professional competency—for reasons that didn’t impact his qualification to practice medicine—after administrators decided to terminate him.

Yet, after he was terminated a hospital lawyer told him that he qualified for a post-termination hearing under the Peer Review Fair Hearing procedure instead of the Involuntary Review Process. Ten months after the termination, the committee found that Dr. Babb had issues with professional conduct and clinical competency. The committee alleged the physician failed to properly and promptly complete medical records and patients’ charts. That finding, in turn, triggered the hospital’s obligation to file a report with the National Practitioner Data Bank, which along with Dr. Babb’s firing and loss of hospital and clinical privileges, took an unfair toll on Dr. Babb’s career.

“Dr. Babb should have been given reasonable notice of the facts and allegations against him prior to termination and should have been provided a reasonable opportunity to respond to those allegations before the decision to terminate was made where that decision necessarily unleashed a series of events that affected his future,” the AMA Litigation Center brief states. “Amici further submit that providing post-termination proceedings—after the die was cast—without an opportunity for the physician to exonerate himself prior to termination, is insufficient to protect the physician’s interests.”

They urge the appellate court to “guard against subversion and distortion of internal hospital procedures, [Health Care Quality Improvement Act] HCQIA procedures and National Practitioners Data Bank reporting by hospitals to the detriment of physicians.”

The brief notes that there certainly “are situations, particularly those related to the imminent safety of patients that may require immediate action by a hospital-employer.” But that these “should be the exception to the rule.”

If “sham” peer reviews can take place, it undermines the credibility of the legitimate peer review procedures' needed to ensure patient safety, the brief tells the court. Also, the potential for termination without prior review, will likely have a “chilling effect” on a doctor’s performance.

“It’s easy to imagine a scenario where a doctor who is disliked by his superiors for non-medicine-related reasons is summarily tossed to the street based on an unsubstantiated and unfounded allegation, only to be given a pretense of a fair hearing after-the-fact at which the hospital digs deeply into minutia to justify the action already taken,” the AMA Litigation Center brief says.

A fear of being let go without a fair hearing “would subvert the medical judgments of physicians forced to practice with more powerful but unqualified colleagues, or in accordance with hospital procedures with which they disagree, in fear that they may be fired at any time, for any reason and with no explanation whatsoever.”

If that happens, “patient safety and quality of care, which should be paramount, would be ceded to fear of termination.” 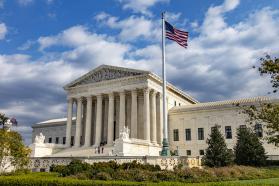 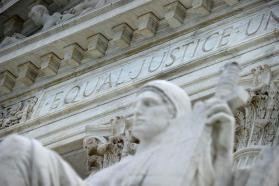