Recognizing the patterns of truth

The beauty of a healthy brain cell viewed under a microscope never ceases to amaze. It is hard for Bennet I. Omalu, MD, MBA, MPH, to put into words how lovely the sight can be.

It “resembles a bright, full moon rising above the horizon on a cool, clear October night,” he has written.

But there was nothing gorgeous in sight when Dr. Omalu, an AMA member and forensic neuropathologist, began to examine the brain cells of Pittsburgh Steelers Pro Football Hall of Famer Mike Webster under his microscope. Rather, he was taken aback by what he found.

Dr. Omalu saw the horror of a lifetime of high-impact head trauma that Webster himself said was equivalent to being in “about 25,000” car wrecks.

The terrible truth of the grotesque pattern that Dr. Omalu recognized in Webster’s brain, as magnified under the scope, would be crystal clear to any neuropathologist.

His discovery—chronic traumatic encephalopathy (CTE)—would dramatically change medicine’s understanding of the danger posed to human brains by repeated high-impact athletic collisions and prompt everyone to think deliberately about the true nature of the beautiful games they love.

Most recently, the AMA adopted comprehensive policy that encourages physicians to “counsel young patients and their parents or caregivers about the risks and potential consequences of sports-related injuries, including concussion and recurrent concussions” and “promote measures to prevent or reduce the consequences of concussions, repetitive head impacts and other injuries in youth sports.”

But before all that, Dr. Omalu had to summon within himself the courage to move medicine forward. He had a restless, gnawing feeling that told him this work could arouse passions that he had trouble fully grasping.

After years of physician training in Nigeria, then in the U.S., Dr. Omalu was just a few months removed from having completed his neuropathology fellowship when case A02-5214 came to him at the medical examiner’s office in Allegheny County, Pennsylvania.

That was the case number assigned to Webster, the Steelers center who died at 50. Since retiring from the National Football League (NFL), he had divorced and developed a substance-use disorder and mental illness. His loved ones said he had become a different man.

The autopsy was unremarkable. The cause of death was plainly a massive heart attack. But Dr. Omalu wondered about this game of football—which seemed so forcefully alien to him—and what impact it might have had on the symptoms Webster increasingly exhibited when his playing days ended.

Examination of the brain revealed nothing grossly abnormal. Nevertheless, Dr. Omalu ordered the brain fixed in formalin so he could view it in detail under the microscope.

And when the slides arrived, he set the box aside—for months. Life as a forensic pathologist in a big-city medical examiner’s office is never slow.

The Webster death investigation was officially closed. Looking more closely would have to be done on Dr. Omalu’s own time, and on his own dime. And that was not all.

Dr. Omalu’s mind flashed back to that most American of traditions he had recently been invited to partake in—the football Sunday party. As the beer flowed, and the game ebbed, the shouts, groans and moans from the fans attired in black and gold rose and struck Dr. Omalu like the outpourings of some ancient ritual carried out at the feet of the gridiron gods.

“I had a feeling that if I pulled out those slides and dug deeper into Mike Webster’s brain, whatever I might discover was going to put me in direct conflict with the passion for football that consumes Pittsburgh and most of America,” Dr. Omalu explained in his 2017 memoir, Truth Doesn’t Have a Side, written with Mark Tabb.

Yet more profound than any fear was a driving compulsion to look, to seek the truth and report it so others would know.

Read this story in its entirety as featured in our inaugural issue of AMA Moving Medicine. 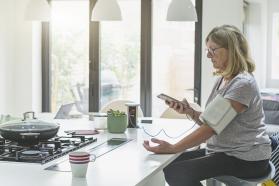