Bruce A. Scott, MD, still recalls with crystal clarity the first time he stood before the AMA House of Delegates (HOD).

Back then, Dr. Scott was a medical student, and he rose to make a brief statement on that day in 1987.

He took his place at the microphone before the hundreds gathered for the meeting and spoke on behalf of the National Student Research Forum to thank the AMA Educational and Research Foundation (now the AMA Foundation) for providing a grant for the annual meeting at the University of Texas Medical Branch (UTMB) in Galveston where students can discuss student research papers in a scientific atmosphere. Soon enough, his 30-second time at the mic was up.

When Dr. Scott wasn’t speaking, he observed delegates from all over the nation, from a myriad of specialties, debate and discuss medicine’s most pressing issues. He saw them compromise, call for studies, reach conclusions and call for action on items in a way that would impact physicians and patients nationwide.

Sworn in as the speaker of the AMA House of Delegates in June, Dr. Scott hasn’t missed an AMA Annual or Interim meeting since attending that first one as a guest three decades ago. He’s also the president of the Kentucky Medical Association (KMA).

Over the years, he’s chaired the AMA Resident Physicians Section (now the AMA Resident and Fellow Section). He’s served as the AMA Young Physicians Section’s delegate to the HOD and was the young physician representative on the AMA Board of Trustees. He has been president and a board member of the AMA Foundation. He’s been a member of the Kentucky delegation to the HOD for the past 17 years and has been involved in countless ways in the KMA, his specialty society and his county society over his career.

8 physician advocacy wins that set the stage for 2019

“I tell people I caught a disease 30 years ago, and I haven’t been cured since,” jokes Dr. Scott, an otolaryngologist who practices in his hometown of Louisville, Kentucky. He’s also a clinical assistant professor at the University of Louisville School of Medicine and the medical director of a multispecialty ambulatory surgery center.

Joking aside, Dr. Scott says organized medicine is his hobby—a hobby he wouldn’t have been able to do at this level without the support of his college sweetheart to whom he’s been married for more than 30 years or the partners at his five-member independent private practice.

“I enjoy it. I don’t play golf and I don’t watch much television,” he says. “It’s a way to impact our profession and patients beyond taking care of an individual patient’s needs in my office. Through organizations like the AMA and the KMA, you are able to take care of needs of all the physicians and all of the patients in the nation or the state. Together we can have an impact on the health care system.” 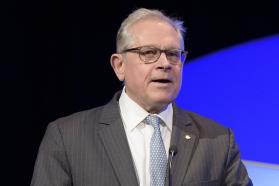