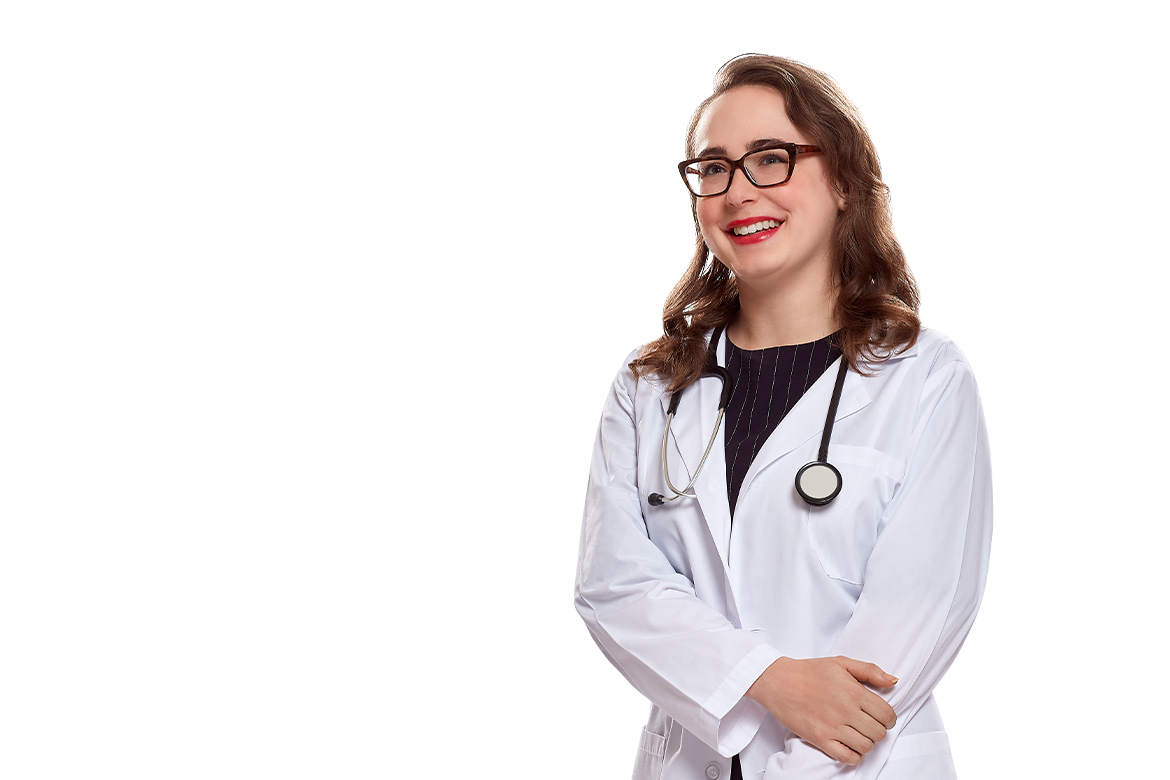 In a career as a practicing physician or physician in training, have you encountered a victim of human trafficking?

The answer to that question—considering that up to 88% of victims of human trafficking in the U.S. had contact with a physician during the period in which they were trafficked—is likely to be yes.

In spite of that daunting figure, the majority of physicians, nurses, social workers and other health care professionals—according to a 2015 survey—have received no training on trafficking. Without any instruction, physicians may struggle to treat or even identify victims.

Early on in medical school, Catherine Coughlin, MD, learned of the issue and then set out a plan to give physicians and medical students the know-how to change it.

“That [statistic] really shocked me and inspired me to pursue this disconnect,” she says. “We know that physicians are seeing victims of human trafficking, but we also know that these patients are falling through the cracks because providers don't have the awareness and training to be able to identify these folks and possibly connect them with resources.”

During her undergraduate studies at Tufts University, Dr. Coughlin learned of an organization called Love 146, an international human rights group working to end child trafficking and exploitation through survivor care and prevention. Her initial involvement with the group was more about listening and learning than acting.

“Physicians have an incredible privilege in being able to work with a broad proportion of the population, and we have the opportunity to be a voice for the people in that population that often are not heard,” Dr. Coughlin says.

Early on in Dr. Coughlin’s training at the Albert Einstein College of Medicine she sat in on a lecture given by Kanani Titchen, MD, an assistant professor of pediatrics at the New York medical school who has been one of the leading voices in educating physicians and medical students on the issue for more than a decade.

In meetings following that lecture, Dr. Titchen suggested that Dr. Coughlin work on creating a curriculum on the issue for medical students.

“Catherine liked the idea of teaching and creating something that would be lasting,” Dr. Titchen says.

“She took that idea and she ran with it. I directed her toward some of the increasing research that we've seen in the medical literature from some of the leaders in the field. And I told her, 'I'm not going to do it for you.' You do what you can and I'm happy to guide you. And she did. The next time we met, she had a full list of all the resources she had read and a PowerPoint that she had created.”

The pioneers of zero suicide take on a new frontier

The summer following her first year of medical school, Dr. Coughlin interned at Sanctuary for Families, a social services organization in New York that has an anti-trafficking division. She was the only medical student in the organization, and she credits that work—teaming with lawyers and social workers—with giving her a larger view of the issue.

“It was a really incredible experience and it was helpful for me to get a much more interdisciplinary perspective on the issue of trafficking,” she says. “Then I had to figure out, OK, how do I glean from this experience what clinicians need to know to help trafficking victims?”

A few months into her second year of medical school, Dr. Coughlin had refined the curriculum to the point that she and Dr. Titchen were co-teaching it as part of Einstein’s reproductive systems course. During her third and fourth years of medical school, she would teach the lessons on her own.

Among the key teachings in the course were:

The curriculum also addresses the unique ways in which physicians can make an impact to curb the prevalence of human trafficking in the U.S.

“Framing trafficking as a public health problem and a health disparity is so vital for people to recognize why this is important as a component of medical training,” Dr. Coughlin says. “Yes, it is a human-rights violation, but this is also something that's resulting in significant morbidity and early mortality for patients who are trafficked. It gives people a sense of why trafficking should be in their purview” as physicians.

For many students, those lessons proved valuable.

Knocking down barriers to health equity

“I hear from classmates of mine as well as people in the classes below me that I've had the opportunity to teach about trafficking that they have identified victims of trafficking in a clinical context,” she says. “They felt like they knew what to look for, they knew how to ask questions, and they knew a few resources to be able to give to those patients. That has been so incredibly motivating to me. What I'm teaching is actually changing the way people practice, which means that patients who are trafficked are closer to getting the care that they need.”

Often, medical students are the first health professional a patient may interact with as part of the intake process. So they are well-positioned to set the tone for the patient experience. Arming medical students with knowledge empowers them to report it to residents and attending physicians while avoiding stigma and accounting for circumstances.

Joseph Dardick, a third-year medical student at Einstein, encountered a victim of trafficking during his first clinical rotation.

“Everything I did was because of what Catherine taught us and told us,” he says. “So if I’m seeing [a trafficked patient] within the first month of my first year of clinicals, then I expect many students, even if they weren’t aware of it, are interacting with this patient population.

“When you’re interacting with someone who is a victim of human trafficking, you have an opportunity to change someone’s life, but you need the knowledge in order to be able to do that—whether that means you are helping them leave their circumstances or just helping them get medical care within those circumstances.”

In an effort to expand the reach of her work, Dr. Coughlin presented the sex trafficking curriculum as a workshop for a number of outside organizations. Among them is the American Medical Association, to whom she presented during the 2018 AMA Interim Meeting. The material was well received.

“I think med students have a tendency to think, ‘What can I do?’” Dr. Titchen says. “I'm not a physician yet, I'm not board certified—and that's exactly the wrong thinking. Catherine, as a medical student created a course for colleagues that she knew was important. If there is a hole in your in your medical education, do the research, do the hard work, find a mentor and fill the hole.

“And as you do that, if you are a part of an organization like the AMA ... and you're a student member, take it to the next level and introduce it to your colleagues at that national organization, present your course at a national conference and spread the word,” Dr. Titchen adds. “It's how Catherine found so much success—she got to present and use those platforms to further that agenda. She saw the need and she knew that she had the skills and she created the network to fill it. Students don't always recognize their power to influence their attendings and how much we learn from them.”

Over the summer, Dr. Coughlin graduated from medical school and began her work as a resident in the Boston Combined Residency Program in Pediatrics. She has always envisioned herself working with children, and Dr. Titchen believes she is well suited for the field.

While the busy schedule of her first year as a resident may preclude her from teaching the human trafficking curriculum for the next few months, Dr. Coughlin hopes to continue working on trafficking well into her career.

“I foresee myself being involved definitely in the intersection of advocacy and education, whether it's education of medical students or residents,” she says. “I hope that we as a medical community will come further along ... and more people will be coming up with nuanced approaches and evidence-based guidelines related to trafficking.”

What to ask potential victims

What to ask potential victims