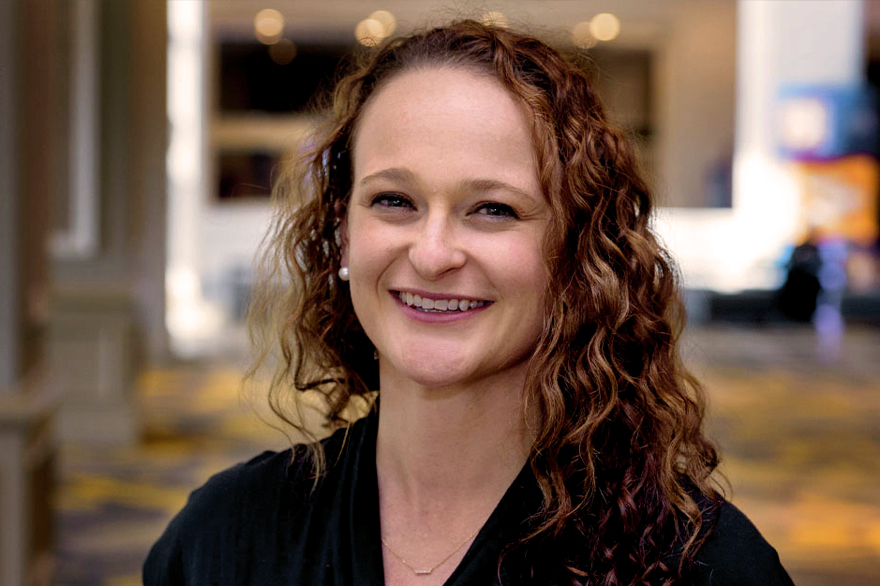 Carolynn Francavilla Brown, MD, believes her family medicine training has given her the confidence to manage whatever challenge is thrown in her path.

She demonstrated her self-assurance last summer by helping to save the life of a baby that had stopped breathing during a family visit to the Denver Zoo.

“Family physicians are trained to feel like we can handle anything—we can go into rural areas and we’re often the first line for many things,” she says. “It gave me the confidence to take action.”

Unbeknownst to her parents, the 2-week-old baby girl had been born with a congenital heart defect of the aorta that was just presenting itself.

“Someone said their baby had stopped breathing and they were calling for a doctor,” Dr. Francavilla Brown recalls. “Before I even heard the end of that sentence, I took off running.”

Dr. Francavilla Brown handed her own 11-month-old to a stranger, but the infant was quickly reclaimed by her husband’s aunt. Then, the doctor saw a man performing CPR on a baby whose skin had turned blue.

“I asked: ‘Are you the dad?’ and he said, ‘No, I’m an off-duty paramedic.’ And I said: ‘Thank God,’” Dr. Francavilla Brown remembers. “We worked as a team doing CPR together for 12 minutes before the ambulance was able to come.”

The paramedic, James Boyer, performed chest compressions on the baby while Dr. Francavilla Brown “blew fresh oxygen into her lungs,” according to a news report in The Denver Post.

“They saved her life,” the mother told the newspaper. “I’ve never been more grateful to anyone in my life than these two people.”

Dr. Francavilla Brown says her first thoughts were about her medical training and if there was anything they could have done differently.

“We had no equipment, no backup,” she says. “All we could do was CPR, and we did CPR very well.”

The ambulance drove off to the hospital and both Dr. Francavilla Brown and Boyer returned to their families.

“No one took down my name or anything,” she says, though the three families were later reunited after finding the baby’s mother with the help of Facebook contacts.

“As a family physician, I’m used to taking care of my patients long-term, so I’m not used to jumping in and helping with emergencies,” says Dr. Francavilla Brown.

The confidence that grew from her family medicine training also manifested itself four years ago. That is when Dr. Francavilla Brown co-founded an independent medical practice, Green Mountain Partners for Health, in suburban Denver. She was seven months pregnant and just one year out of residency.

Obviously, the zoo experience was not the typical day at the office. There were no insurance forms to fill out and the environment was certainly different. But the do-it-yourself nature of the Denver Zoo incident and her being able to deal with an unanticipated scenario were not out of the ordinary.

Dr. Francavilla Brown says she began “toying with the idea” of an independent practice as a resident, but it seemed overwhelming as she would make mental lists of every single piece of equipment she might need and wondered how she would get it.

But then she met James Boyd, MD, another doctor with similar aspirations, through the Colorado Medical Society. Together, they opened a one-room practice with little else but a desk and an exam table in a shared office space facility used mostly by accountants and real estate agents.

“We started super small and really basic with no staff and slowly grew from there,” Dr. Francavilla Brown says.

The shared space was sufficient in the beginning, says Dr. Boyd, explaining that physical space is one of the biggest expenses that practices have, so paying for no more than you absolutely need is a good way to start.

Also, since there were times when they could not both be seeing patients, Dr. Boyd says he moonlighted outside the practice doing workers’ compensation evaluations and worked one day a week at another clinic.

Another thing that helped was that they had patients who followed them from the larger practices where they had worked previously.

The two partners have since been joined by two physician employees and a three-person support staff that does “a little bit of everything,” Dr. Francavilla Brown says. But she adds that the doctors also perform some tasks traditionally assigned to support staff, such as walking patients to the exam room and taking vital signs. 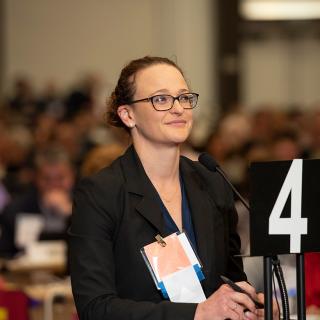 “I found having an assistant take vital signs didn’t speed me up at all,” Dr. Francavilla Brown says, adding that, when she takes a patient’s blood pressure reading, she knows it’s accurate. But there are other benefits too.

“I like that part of the practice and I think it reinforces the therapeutic relationship,” she says. “I like chitchatting with the patients and telling them a joke to lower their blood pressure while I’m doing it. Or I’ll tell them to think of something funny or relaxing—like having a beer on the beach or cuddling puppies.”

Hiring staff has been both the “biggest stressor” of running a practice while also being a very rewarding part of it.

“It’s nerve-wracking because you don’t want to pick the wrong person,” she says. “They represent your business and you have to trust that if someone is on the phone having chest pains, they will give the right information.”

The solution has been to hire premed students who exhibit both the knowledge and interest in medicine. The reward has come from serving as a mentor, she says.

“It’s the thing I’ve been most proud of and have enjoyed more than I expected—being an employer,” Dr. Francavilla Brown says. “I like developing our premed students.”

Araceli Cortez has worked at the practice since 2016. She graduated last spring with a degree in biology from the University of Colorado-Denver, where she followed a premed track, and is in the process of applying to medical school.

“I’ve learned a whole lot from the practice on both the administrative end with the paperwork, and the clinical end assisting with procedures,” says Cortez, who is certified to draw blood. “I’m experiencing things that most med students don’t see until they are deep into med school.”

Dr. Francavilla Brown is helping Cortez get to her goal of going back to her rural hometown, Olathe, Colorado, where she was the high school valedictorian, and opening a family practice.

“One of my biggest passions is to help my community, which helped me get to this spot,” Cortez says. “Also, you don’t see many Latina physicians, so I want to be a role model and be seen as someone that patients trust—someone who knows their language and culture.”

Cortez’s father built his own construction company from the ground up, so she knows what it’s like to be your own boss. Working at Green Mountain Partners has shown her that it can be done in medicine as well.

“So, working here has been a double win for me—it’s not just a job,” she says. “Dr. Francavilla’s mentorship is incredible. She believes in me and that’s really touching.”

Dr. Francavilla Brown adds that the practice’s two associate physicians—Jennifer Sapp, DO, and Rachel Saul, DO—have “found a home here where they’re really happy,” because they’re practicing medicine the way they think they should be without having to deal with “administrative drama.”

Physicians tend to overthink the business aspects of running a practice, according to Dr. Francavilla Brown.

“A lot of businesses in America are run by people without business degrees,” she says.

“We’re not so incredibly bright or unique,” he says. “Private or independent practice is achievable and can be incredibly fulfilling if you do it in a thoughtful manner and let go of the ‘We have to do every last thing’ way of thinking.”

Running a business allows people “to individualize what works for them,” Dr. Boyd explains, adding that being small also helps the practice team identify and correct problems quickly.

Operating as an independent practice, Dr. Francavilla Brown sets her own hours and her own rules on payment.

Additionally, patients know the practice is “duly invested in their care” and strong bonds are created between patients, physicians and staff.

“They really know me personally and most of our patients know about my kids and my husband,” Dr. Francavilla Brown says, adding that about half of the practice’s new patients are referred by existing patients.

“They know they’re not just a number,” she says. “They know they don’t have to go through some big phone tree to talk to a medical assistant.”

Virtually, anything is possible

Virtually, anything is possible

About 10% of her visits are done virtually using Zoom, a popular teleconferencing vendor that offers a HIPAA-compliant system for health care that uses encryption and can connect to electronic health records.

Virtual visits have been found to be convenient for follow-up visits to discuss lab results or if a medication is working.

“We use it most commonly for mental health,” Dr. Francavilla Brown says, adding that telehealth is particularly useful for follow-up visits for patients with anxiety or depression.

She says patients like that they can see their doctor without leaving work—though patients will often go out to their cars for privacy.

Dr. Boyd notes that he has some transgender patients who have difficulty finding physicians in their regions who can both provide the care they need and take their insurance.

“They don’t need to physically come into the office on a regular basis and telehealth can provide access to care that may be difficult to find in certain areas,” he says.

Being a voice for private practice

Being a voice for private practice

Though she doesn’t work for a large organization, Dr. Francavilla Brown believes in organized medicine.

She has served in the AMA House of Delegates and is active in her state and local medical societies as well as the Colorado Academy of Family Physicians. She is also board certified in obesity medicine.

“I love our Colorado Medical Society,” the fifth-generation Coloradoan says. “They have been a great resource for me.”

The state organization has helped with “big picture issues” as well referrals to attorneys and real estate agents. Dr. Francavilla Brown is also treasurer for the Foothills Medical Society, which represents physicians in Denver’s west suburbs. She notes that the local group has been especially valuable on issues such as resolving a Medicaid payment problem that happened when the program transitioned to a new computer system.

In the AMA House of Delegates, Dr. Francavilla Brown has served as a delegate for obesity medicine and had a hand in creating the obesity medicine caucus that pushed for “patient-first” language, which advocates for using terminology such as “patients with obesity” rather than “obese patients.”

She’s also been involved with the AMA pilot program to provide childcare at House of Delegates meetings. Now serving as an alternate delegate for Colorado, Dr. Francavilla Brown has been active as a voice for private practice and advocating drug price transparency.

Her interest in drug pricing stems from seeing her patients with asthma and chronic obstructive pulmonary disease struggle to afford their inhalers.

While it is true that, according to AMA data released in 2019, employed physicians now slightly exceed those who own their own practices, Dr. Francavilla Brown says she hopes “those tables will turn again.”

Operating as an independent practice allows her to add an executive title to her name such as “president” or “CEO,” but Dr. Francavilla Brown has chosen not to do so.

“I usually just call myself an ‘owner’—and ‘doctor’ is fine,” she says. “There’s no better title than that.”