Editor’s note: In late February, Anthem Inc. Executive Vice President and Chief Clinical Officer Craig E. Samitt, MD, wrote to AMA Chair-elect Jack Resneck Jr., MD, and said the insurer decided against proceeding with this controversial policy that was expected to have a significant nationwide impact on physician  practices and the delivery of prompt patient care.

“Anthem’s decision to drop its planned modifier 25 policy is a positive step forward, demonstrating again that when doctors and health plans work together, the best outcome for patients can be achieved,” Dr. Resneck said. He added that the strong advocacy efforts of many state medical associations and national medical specialty societies contributed to the company’s move.

Our original story, filed after Anthem adjusted its modifier 25 plan to cut pay by 25 percent—instead of 50 percent, as originally planned—was published Dec. 27, 2017, and appears in its entirety below.

Physicians have vowed to continue pushing back against a health insurer’s plan to reduce payment for significant, separately identifiable evaluation and management (E/M) services that are provided on the same day a procedure is performed or a wellness exam is conducted.

Indianapolis-based Anthem Blue Cross Blue Shield announced last week it would reduce the size of its planned payment cut for such services from 50 percent to 25 percent and move the implementation date back from Jan. 1, 2018, to March 1, 2018.

The announcement came after the AMA sent a letter to Anthem requesting that the company halt plans to implement the policy and a face-to-face meeting was held between AMA leaders and senior Anthem officials.

While noting that the dialogue the AMA has had with Anthem management “is appreciated,” the Association is making it clear that Anthem’s moves did not go far enough. The AMA House of Delegates (HOD) adopted policy at the 2017 Interim Meeting specifically opposing any such pay reduction for E/M services.

The AMA provided Anthem with information clarifying how the recommendations of the AMA/Specialty Society Relative Value Scale Update Committee (RUC) do not include duplicative physician work or practice expense for procedures typically billed with an E/M service on the same date. The Association also gave Anthem further supportive data on those procedures for which practice expense already has been reviewed by the RUC.

Using Medicare payment data, the AMA also showed Anthem’s leaders instances in which the proposed lower payments would not even cover direct practice expenses when a needed minor procedure was performed on the same day as an office visit. That would result in a financial loss for physician practices offering timely, high-quality care.

“Anthem’s decision to reduce the magnitude of the proposed payment cuts in response to evidence supplied by AMA is a positive step, as is the plan to delay implementation until March 1,” said Jack Resneck Jr., MD, chair-elect of the AMA Board of Trustees. “However, the AMA continues to challenge Anthem’s rationale for the unjustified 25 percent reduction proposed in the revised policy. AMA leadership is pursuing further discussions with Anthem to seek additional changes in their flawed policy.”

The reduction targets E/M services billed with a Current Procedural Terminology (CPT) modifier 25 for a significant and distinct health problem when performed on the same day and by the same provider as a minor surgical procedure code or a preventive/wellness exam. Appropriate use of CPT modifier 25 facilitates provision of unscheduled, medically necessary care and, consequently, prompt diagnosis and streamlined treatment. Physicians’ efforts to provide patient-centric care will be disrupted by implementation of Anthem’s policy.

The HOD directed the AMA to “aggressively and immediately advocate” that, when an E/M code is appropriately reported with a modifier 25, that both the procedure and E/M service are paid at the allowable rate without reduction.

The American Academy of Dermatology Association (AADA) has been part of the effort challenging the Anthem policy, which it described as “totally unreasonable.”

Impact will be widespread

The California Medical Association announced that it has taken the issue to its state Department of Managed Health Care. The Kentucky Medical Association (KMA) has created a modifier 25 resource page which includes an example of an appropriate use of the modifier.

“A patient has a nosebleed. The physician performs packing of the nose in the office, which stops the bleeding,” the KMA resource page states. “At the same visit, the physician then evaluates the patient for moderate hypertension that was not well controlled and adjusts the antihypertensive medications.

Similarly, the American College of Cardiology (ACC) provides an example that would pertain to its members.

“A patient visits the cardiologist for an appointment complaining of occasional chest discomfort during exercise. The patient has a history of hypertension and high cholesterol. After the physician completes an office visit it is determined that the patient needs a cardiovascular stress test that is performed that day by the same physician.”

“The physician codes an E/M visit (99201–99215) and he also codes for the cardiovascular stress test (93015),” the ACC website states. “The modifier 25 is added to the E/M visit to indicate that there was a separately identifiable E/M on the same day of a procedure.”

The AMA continues to work with other Federation of Medicine organizations to address Anthem’s problematic policies concerning hospital outpatient imaging services and retrospective review of payment for emergency services. 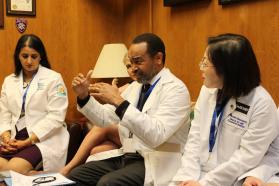 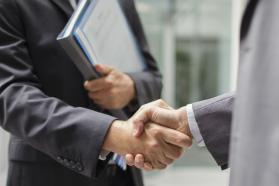