Words of inspiration were offered by the six winners of the AMA Dr. Nathan Davis Award for outstanding government service at a ceremony that took place during the AMA National Advocacy Conference in Washington. The honorees also shared personal stories that motivated their advocacy and shaped their careers.

The winners were described by master of ceremonies Deborah Roberts of ABC News as “angels in our midst” who demonstrate “that medicine isn’t really just about physical care, but also attending to the heart, soul and minds of patients.”

Roberts’ description of the winners was typified by Nora D. Volkow, MD, who is director of the National Institute on Drug Abuse, part of the federal government’s National Institutes of Health. She won the award for Outstanding Member of the Executive Branch in Career Public Service for her pioneering work demonstrating that substance-use disorders were not a failure of will, but a treatable and preventable brain disorder.

Learn more with the AMA about why 90% of patients who need treatment for substance-use disorder are unable to get it.

Dr. Volkow noted that, as a psychiatry medical student, resident and attending physician, not enough attention was paid to patients with substance-use disorders. They were isolated and had lost the support of their families, lost the capacity to make decisions and, eventually, were in danger of “losing themselves.”

“In addiction, we lost the capacity to feel their pain,” Dr. Volkow added. “We lost that capacity to empathize.” 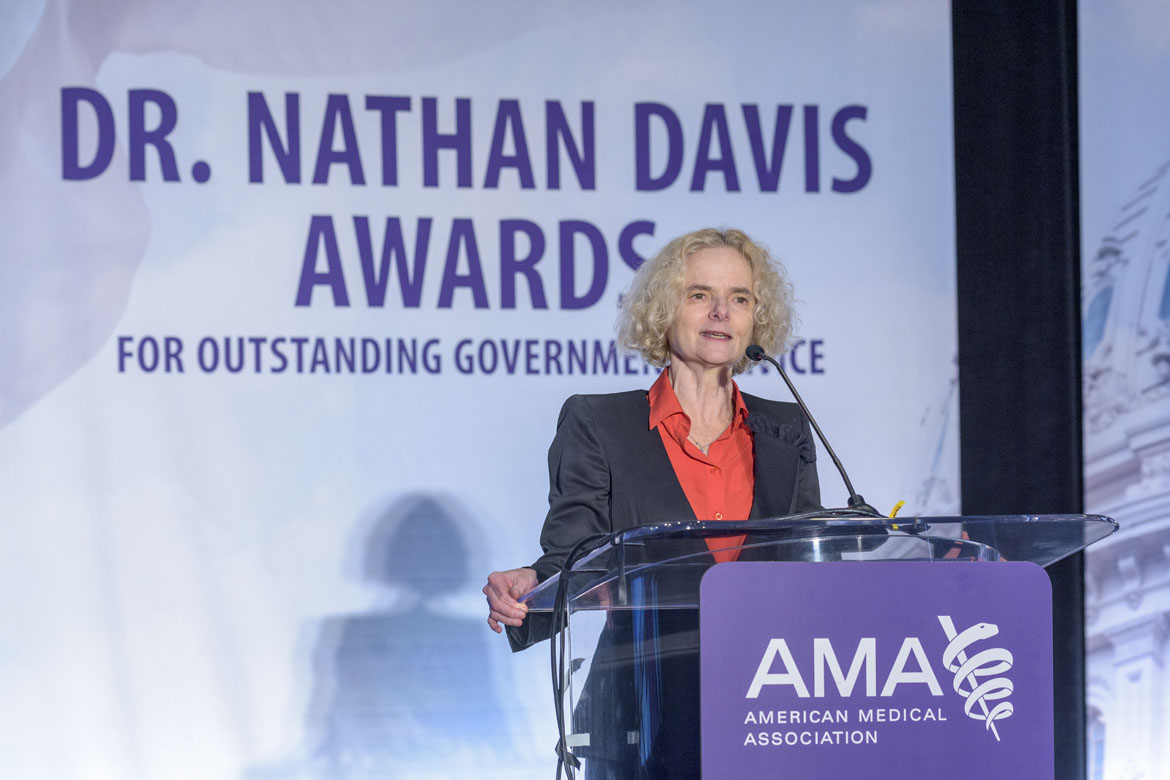 National Institute on Drug Abuse Director Nora D. Volkow, MD, was one of the six to win an AMA Dr. Nathan Davis Award.

This is one of the most harmful aspects of the stigma of substance-use disorder, Dr. Volkow explained, adding that she had dedicated her work at the National Institutes of Health, in part, to using science and knowledge to destigmatize the disease and to find solutions to end the opioid epidemic.

“There are people that are dying out there,” she added, “and there is an urgency for all of us to bring our capacity to address it.”

Find out what the AMA is doing to end the opioid epidemic.

The physicians who won the Outstanding U.S. Representative and Outstanding Member of a State Legislature awards both noted that they often get asked why they entered politics

U.S. Rep. Raul Ruiz, MD, D-Calif., described politics and policy as “another tool in our medicine bag to care for patients.” As a member of Congress, the emergency physician is working on issues such as health equity, surprise billing, access to care, high costs and physician shortages.

John M. Zerwas, MD, a Republican who served in the Texas House of Representatives from 2007 to 2019, stepped down to become executive vice chancellor for health affairs of the University of Texas system.

An American Society of Anesthesiologists past president, Dr. Zerwas was recognized for his successful efforts to expand graduate medical education, raise the legal ages for smoking and vaping to 21, promote organ donation, and secure funding for the Cancer Prevention and Research Institute of Texas.

Cancer “is something that touches everybody,” Dr. Zerwas said, adding that he lost his parents and his first wife to the disease. He concluded with thoughts on the future of medicine and said physicians must serve as advocates to shape that future.

There is “no grander profession” than the practice of medicine and it is up to today’s physician leaders to pass that knowledge to the younger generation of doctors—and younger physicians will need to be strong advocates for the profession for it to remain true, he said.

“I always like to paint a very bright picture for the practice of medicine, but it has to come with making advocacy and involvement in organized medicine a part of your practice—not something you do in addition to your practice,” Dr. Zerwas said. “You have to weave it within the fabric of it.”

Nominated by the Maryland State Medical Society, Gov. Larry Hogan won the award for Outstanding Governor in part for his early efforts to address the opioid epidemic. A Republican reelected to his second term in 2018, Hogan was praised for his bipartisan efforts to address the epidemic through education, prevention, treatment and enforcement.

Hogan recently endured a public battle with stage three non-Hodgkin lymphoma, and one result of his illness was that he came to understand the work done by the state’s doctors, nurses, medical technicians and health researchers in ways he never could have imagined.

“Which is why—long after I am governor—I will continue to stand with all of you and all of those who are treating patients, fighting to cure these deadly diseases, and fighting to expand access to treatments,” Hogan said.

Health reform: How to improve U.S. health care in 2020 and beyond

The award for Outstanding Career Public Servant at the State Level went to an international authority on food-borne disease, Tim Jones, MD, chief medical officer (CMO) for the Tennessee Department of Health. Before becoming CMO, he was the state epidemiologist and assistant commissioner for the Tennessee Department of Health, where he led work to contain multistate epidemics including the West Nile virus, Zika virus and fungal meningitis.

“Medicine gives people so many opportunities to go in so many directions,” Dr. Jones said. “Everything from working one-on-one with patients, training the next generation of clinicians, politics—we all serve our community in different ways.”

The Outstanding Member of the Executive Branch in Career Public Service for Scientific Advancement award was given to a scientist who has worked for four decades in malaria research and on developing a gene-based malaria vaccine.

Martha Sedegah, PhD, is the director of clinical immunology and parasitology at the U.S. Naval Medical Research Center’s malaria department. A native of Ghana, she lost four siblings to the disease.

“It wasn’t an accident,” Sedegah said of her career choice. “It was very personal.”

But she added that more than 200 million malaria infections occur each year and that half a million children die from the disease each year, noting that “malaria is a world problem.”

Sedegah paid tribute to her mentor, Nina Wedderburn with the Royal College of Surgeons of England, who supervised her master’s thesis and PhD dissertation.

Up
118
More about:
7 physicians honored for their contributions to medicine
Pioneer on rare genetic disease research among 5 honored by AMA
American Medical Association Awards for Outstanding Government Service
Featured Stories

Congress must not take physicians’ Medicare pay to build bridges