A particular association determines membership on the basis of members' IQ scores. Only those persons who have documented IQ scores at least two standard deviations above the mean on the Wechsler Adult Intelligence Scale (WAIS) are eligible for admission.

Of a group of 200 people randomly selected from the population at large, how many would be expected to be eligible for membership to this society assuming a normal IQ distribution?

In a normal distribution or bell-shaped curve, the mean, median, and mode are equal and at the center of the curve.

The standard deviation (SD) is a measure of the spread of numbers in a set of data from its mean value.

The graph below depicts a normal distribution with 1, 2 and 3 standard deviations of the mean: 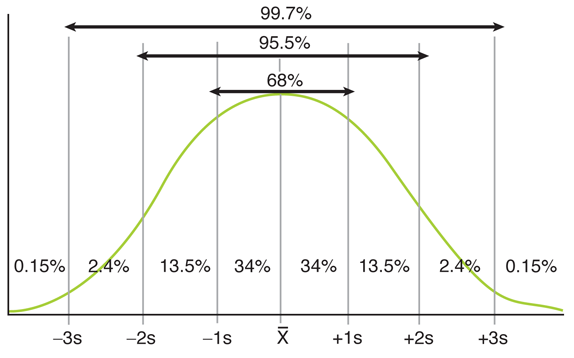 In any normal curve:

How physicians can better care for Native American patients

We must be able to trust the FDA vaccine approval process

Marijuana policy should be guided by evidence, not the ballot