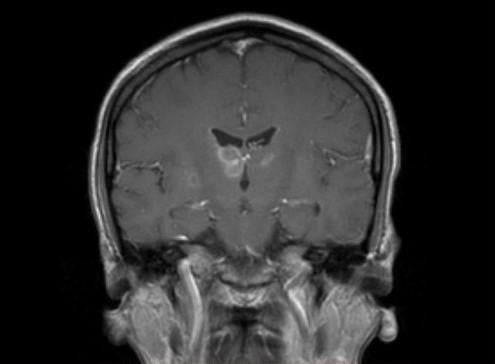 A 45-year-old man comes to the physician because of a one-week history of headaches, nausea and vomiting. He has a history of dilated cardiomyopathy and underwent a heart transplant one year ago. His temperature is 37.9° C (100.2° F), pulse is 110 beats per minute, respirations are 14 breaths a minute, and blood pressure is 160/112 mm Hg. He is alert, awake, and oriented and has no signs of meningeal irritation. Examination of the fundus shows bilateral papilledema. An MRI scan of the head is shown.

Which of the following is most likely deficient in this patient?

This man, immunosuppressed to prevent rejection of his transplanted heart, has developed cerebral toxoplasmosis as evidenced by the multiple ring-enhancing lesions seen on MRI. 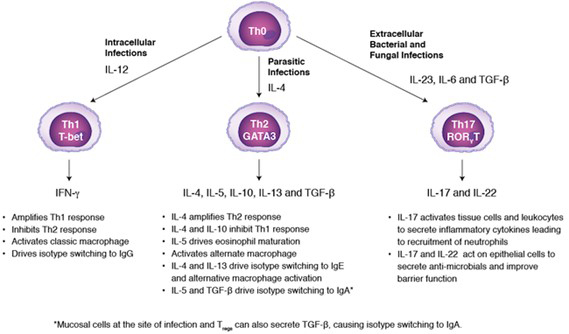 Choice A: Complement is a set of serum proteins that act on each other in a cascading fashion to culminate in the production of a membrane attack complex that will lyse whatever particle has started the cascade. Complement is useful only against extracellular agents, as it is not carried into cells.

Choice C: IgE is an immunoglobulin that can mediate ADCC against parasites, but it is elicited against helminth parasites and not intracellular protozoa such as Toxoplasma.

Choice D: IgG is the most abundant antibody in the serum. Intracellular organisms require cell-mediated responses, but IgG is likely also produced as B cells are activated from Th1 cells. The IgG would also activate ADCC, neutralize the pathogen when outside the cell, and activate complement.