A 6-year-old girl is brought to the physician by her parents because of a severe sore throat. Her temperature is 38.9ºC (102.0ºF). Physical examination shows an erythematous posterior oropharynx with obvious abscesses on the tonsillar pillars. A rapid antigen test for Streptococcus pyogenes is positive. The drug of choice for this infection will have greatest efficacy at which of the following stages shown in the diagram? 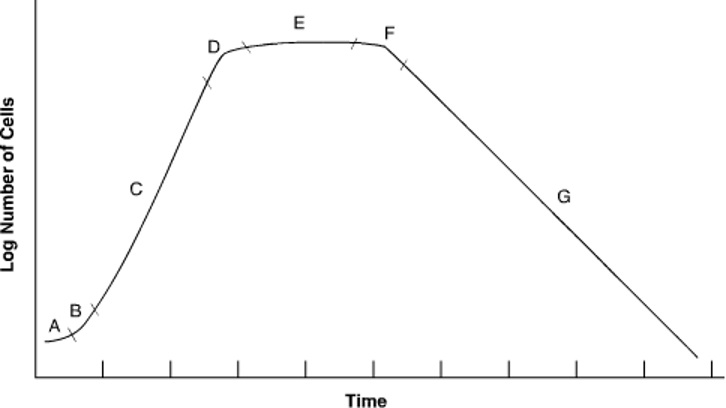 This patient has pharyngitis caused by Streptococcus pyogenes (Group A Streptococcus). In the absence of drug allergy, beta lactam drugs such as penicillins and cephalosporins are the drugs of choice for uncomplicated S. pyogenes infections. Macrolides may be used in beta-lactam allergic patients. Beta-lactam drugs act by inhibiting cell wall synthesis. In the bacterial growth curve, rapid exponential growth occurs during the log (or logarithmic growth) phase. In a bacterial culture, cell wall synthesis and optimal cell growth will occur at a maximal rate during the period of exponential growth, which is marked on the graph above with the letter C; cells will be maximally susceptible to most antibiotics.

Choice A: The lag phase is the initial phase of a bacterial culture during which there is no increase in cell number. Cells in a culture at this stage are activating enzymes necessary for metabolism but are not undergoing cell wall synthesis.

Choice B: This indicates the initial phase of bacterial multiplication when cell division has not yet reached a maximum. Although cell wall synthesis would indeed make such cells sensitive to beta-lactam antibiotics, it is not the period of maximum sensitivity.

Choice D: This indicates the phase of the bacterial growth curve when toxic metabolic products begin to accumulate and nutrient levels begin to be insufficient to support continued growth. New cell wall synthesis would begin to fall at this point.

Choice E: The stationary phase is a period of the bacterial growth curve when the number of bacteria dividing in the culture equals the number of cells dying. This would not be a period of intense cell wall synthesis.

Choices F and G: The decline (F) and death (G) phases of the bacterial growth curve are periods when bacteria are dying more rapidly than they are dividing. Cell wall synthesis would be minimal.