The 2021 AMA National Advocacy Conference is normally held in Washington, with traditional highlights including visits to Capitol Hill where physicians meet with their senators and representatives to seek their support in addressing the concerns of their patients and colleagues.

Stay current on the latest issues impacting physicians, patients and the health care environment with the AMA’s Advocacy Update Newsletter.

The conference and those visits were both held virtually this year, but midway through the event, attendees received word that their efforts have had an impact as legislation was introduced that featured provisions that were exactly what advocates from the AMA and state medical societies were seeking.

The bipartisan Telehealth Modernization Act was introduced during the conference and it would put into law emergency measures that temporarily had waived restrictive regulations and expanded Medicare payments and ultimately allowed physicians to continue caring for patients without requiring them to leave their homes. 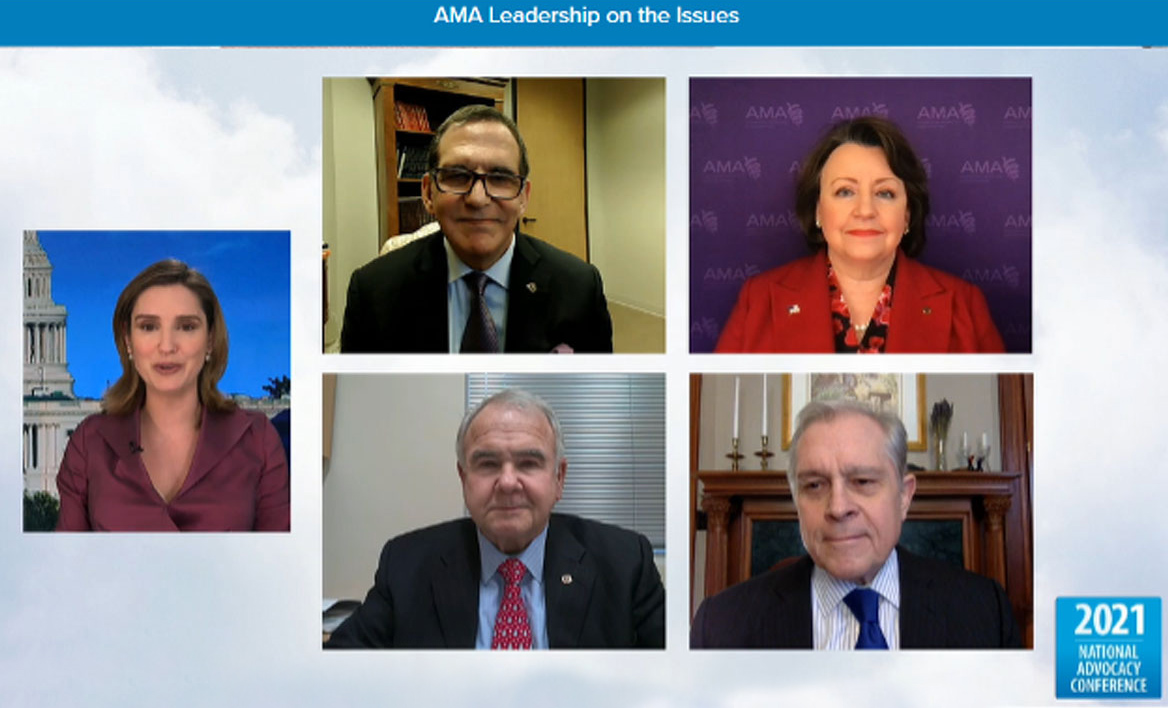 “It's not often you get a bill written where you like all of it,” said Jason Marino, AMA director of congressional affairs. “But this is one of those bills. It's a great bill written exactly how we would like it.”

Sustaining the gains seen in telehealth adoption during the COVID-19 pandemic is just one of the concerns addressed at the conference during a panel discussion with AMA physician leaders that was moderated by Margaret Brennan, host of the CBS News program “Face the Nation.”

Brennan began by noting that COVID-19 has put health policy as the “No. 1 agenda item” she prepares for on her program as it is the defining issue for the nation’s politics, economy and public concerns such as reopening schools.

She asked AMA President Susan R. Bailey, MD, in terms of advocating for public health needs during the pandemic, “Where do you begin?

AMA efforts have been focused on getting physicians the scientific information and financial resources they need to care for patients, Dr. Bailey said. But that focus has covered a lot of ground, including:

“I know that’s kind of been a fire hose of information, but that’s really how busy the AMA has been in the last year,” said Dr. Bailey, a Fort Worth, Texas-based allergist and immunologist.

And, while COVID-19 has undeniably been a focus, the AMA’s advocacy efforts go beyond the pandemic, said AMA President-elect Gerald E. Harmon, MD.

“It's apparent to a lot of us in America that this COVID pandemic has revealed and exposed some public health issues and vulnerabilities among America's patients—beyond just the COVID infection,” said Dr. Harmon, a South Carolina family physician with a 35-year career in the U.S. military.

To address these vulnerabilities, the AMA supports:

He also noted that drug overdoses and mental health issues have spiked, continuity of care for chronic conditions has suffered and the life expectancy of Americans has dropped as a result of those trends.

“One of the things I'll tell you the AMA is doing—and all of us need to be committed to—is a more intentional commitment in addressing the impact of structural and political inequities and racism in all its forms, particularly in health care,” Dr. Harmon added.

AMA Board of Trustees Chair Russ Kridel, MD, noted that government loan programs have helped practices stay viable, but what also is needed is relief from administrative burdens such as prior authorization.

“For every hour we see patients, we have two hours of clicking on a computer filling out prior authorization forms,” said Dr. Kridel, a facial plastic and reconstructive surgeon in Houston.

He added that physicians average 33 prior authorizations a week that may require long periods spent on the telephone and that the delays lead some patients to give up trying to fill their prescriptions.

AMA Executive Vice President and CEO James L. Madara, MD, noted that the AMA works in a bipartisan manner on issues widely embraced by the public such as providing people with affordable and meaningful health insurance.

This can lead to opportunities in finding where AMA health policies match the priorities of legislators. But the long-range goal is to stay above the “partisan fray” especially as political fortunes change, he said.

Dr. Bailey noted that the politicization of mask-wearing is “incredibly frustrating and maddening,” and is a symptom of a growing anti-science bias that needs to be countered with education and informing patients that wearing a mask does offer protection, does not cause harm and has other benefits.

“Wearing masks is an act of kindness,” Dr. Bailey said. “Wearing masks protects you and protects your loved ones. And it's an important tool in our toolbox that we can't ignore to fight this disease and eventually get back to normal.”