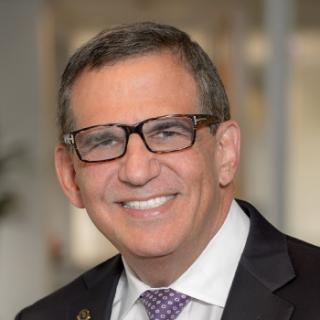 Russ Kridel, MD, a facial plastic and reconstructive surgeon in private practice with more than 30 years of experience, was first elected to the American Medical Association Board of Trustees in 2014. He has served as secretary and chair.

Active in the AMA early on, Dr. Kridel helped form the AMA Medical Student Section and was on its governing council and later served on the governing council of the AMA Resident and Fellow Section. As a resident he wrote a book, Cost Effective Medical Care, which was published by the AMA. Since then, Dr. Kridel has held multiple leadership positions in the AMA House of Delegates, including chair of the AMA Council on Science and Public Health. He has also served as a board member of the AMA Foundation and on the AMA Specialty and Service Society Governing Council. He has represented his specialty as an AMA delegate or alternate delegate for over 20 years.

A passionate advocate for maintaining the patient- physician relationship, Dr. Kridel is a stalwart supporter of physician autonomy and practice sustainability. He has testified in the halls of Congress in Washington, D.C., and Texas to address excessive government red tape and regulations affecting the quality and accessibility of care.

At the local level, from 2013 to 2014, Dr. Kridel served as president of the Harris County Medical Society, which has more than 12,000 members. During his tenure there, he created the “Shut Out Sugar” campaign to help patients address obesity. He was awarded the Texas Bluebonnet Award for his contributions to diet and nutrition and in 2015 was awarded the C. Frank Webber Award for his outstanding service to Texas medical students. Dr. Kridel was also a member of the board of directors of the Texas Medical Center from 2012 to 2014 and currently serves as a consultant to the Texas Medical Association (TMA) Council on Legislation.

Dr. Kridel is a clinical professor in the Division of Facial Plastic Surgery at the University of Texas, Houston. He is the past president of the American Academy of Facial Plastic and Reconstructive Surgery (AAFPRS) and has been the recipient of its highest awards for surgical skill and innovation, as well as for leadership, health policy and advocacy. His dedication to young physicians is evident in his role as an active fellowship director for the AAFPRS with 39 fellows, including one of the first female fellows, completing their training under his guidance. Having published more than 150 peer-reviewed articles and textbook contributions, Dr. Kridel is an in-demand speaker who has given lectures on facial plastic and reconstructive surgery around the world.

Dr. Kridel’s interests have always been community oriented. Dr. Kridel founded The Face Foundation, which provides surgical care at no fee to underserved patients who are survivors of domestic violence. He served as president of the TMA Foundation, which has improved outcomes for many through its immunization programs, teacher awards and minority scholarships. He has also done mission work in Guatemala.