What’s the news: In an unprecedented three-day hearing this week, Judge Richard Leon of the U.S. District Court for the District of Columbia will hear from six witnesses about the $70 billion merger of pharmacy giant CVS Corp. and mega-insurer Aetna Inc. The U.S. Department of Justice (DOJ) decided in October 2018 to allow the merger after requiring a divestiture of Aetna’s Medicare Part D business.

Judge Leon’s decision to hold a hearing that includes live witnesses as part of a Tunney Act review of the DOJ action is a first, antitrust experts say.

The AMA’s expert—Neeraj Sood, PhD—will be the lead witness to discuss how the Justice Department’s divestiture remedy may affect certain insurance markets for pharmaceuticals. Sood is professor and vice dean for research at the University of Southern California Sol Price School of Public Policy and director of research at the Leonard D. Schaeffer Center for Health Policy & Economics.

In an amicus brief to Judge Leon, the AMA explained why Aetna’s proposed divestiture will not come close to restoring competition in the prescription drug plan market to premerger levels.

“The CVS-Aetna deal is popularly described as a vertical merger involving two large companies that don’t operate in the same markets. But in fact, CVS and Aetna do compete as formidable rivals in some of the same markets, raising substantial concerns that are specific to a horizontal merger,” said AMA President Barbara L. McAneny, MD. “It is these competitive concerns that are the catalyst for today’s unprecedented evidentiary hearing."

What’s next: The hearing is set to run through Thursday in the U.S. District Court in the District of Columbia. Judge Leon’s decision on whether to uphold or dissolve the DOJ settlement on the merger is expected this summer. 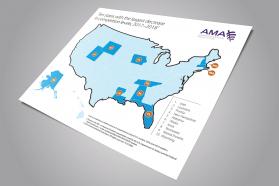 10 states where health insurance competition has fallen the most