Health inequity has left many communities around the nation with health disparities that are out of their control. Understanding the concept of how socioeconomic and environmental factors play a major role in population health is the most effective way to reshape our traditional health narrative.

Anthony Iton, MD, senior vice president of healthy communities at the California Endowment, recently spoke to medical students at the University of California, Davis, School of Medicine during the AMA’s Accelerating Change in Medical Education  consortium meeting on health equity and community-based learning.

When Dr. Iton left Montreal years ago for medical school at Johns Hopkins in Baltimore, he was given a tour of the city by an upperclassman. As they drove through East Baltimore he was shocked. 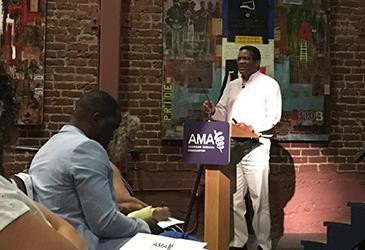 “East Baltimore looked to me like Beirut,” he said, “with bombed out buildings and cars up on their axels and little mangy dogs running around and babies playing in and amongst all of this and I thought, how is this possible?”

“I had never seen anything like this in my life,” he said. “[The upperclassman] saw my mouth agape, and he said, ‘What’s wrong with you?’ And I said, ‘When was there a war here?’”

“We conveniently overlook the fact that there has been a narrative in this country,” Dr. Iton said, “and this narrative shapes policy, and that policy creates conditions.”

“We of course know what’s happened in Baltimore more recently,” he said. “For those of us who have spent time in Baltimore, this has been happening for forty years. Baltimore has been a roiling insurrection for literally half a century because of these conditions. And yet we act surprised when we see it erupt all of a sudden.”

Dr. Iton thought hard about all of this inequality as he went through medical school and one question arose in his mind: Does your ZIP code matter more than your genetic code when it comes to your health?

When he became the health director for Alameda County, California, Dr. Iton had access to the database of death certificates which details how someone died, their age, race or ethnicity and where they lived. And those four pieces of data can reveal a lot about patterns of death in a community over time.

What they found after looking back several years was that “there are places where you pay a price in loss of life because of your address,” he said. They expanded their research to many other cities and “everywhere we looked we found life-expectancy differences in the same city on the order of 15-20 years.”

“In an ideal world … where you live shouldn’t predict how long you live,” he said, “but we do not live in an ideal world. What drives health is beyond just health behaviors and access to the doctor…. There’s a whole host of environmental and social determinants that are actually much more influential on our health trajectories, and we have no organized practice for dealing with them.”

“We know that much of what affects our health happens outside the doctor’s office,” he said. “We know increasingly more about stress [and] various different policy-mediated factors that shape how our bodies respond. The things that we make difficult for people in life—getting health insurance, getting access to primary care—these are stressors that are unnecessary that actually change our physiology.”

Stress, or the release of cortisol, can have major implications for health, Dr. Iton said. “When you walk into a low income community, cortisol levels are high. People are constantly being threatened. Most of these threats are policy-mediated threats. They’re not somebody with a gun or a hammer, although that happens. It’s often the inability to meet your basic needs with the resources you have at your disposal.”

“So you’re constantly bathed in cortisol and when that happens that stimulates hypertension, cardiovascular disease, glucose intolerances, insulin resistance, inflammation, decreases your immune responses and causes atrophy and cell death in critical parts of our brains,” he said. “Low income people and wealthy people in this country are physiologically different,” Dr. Iton said. “Not because they were born that way, but because we made them that way through policy.”

“When you’re seeing health disparities, you’re only seeing the tip of the iceberg,” he said. “You’re not seeing all the underlying, structural inequities that produce those disparities. And then we try to treat those disparities with pills and brochures.”

A framework for change

A framework for change

“When I was in medical school, I knew something was happening, I just didn’t have words for it,” Dr. Iton said. “I would see patients that seemed so frazzled and stressed and sick, and the frame that I was taught is that I have to teach this person how to live in 15 minutes.”

The Bay Area Regional Health Inequities Initiative developed a framework “which tries to understand how we design strategies to intervene in what we’re seeing,” Dr. Iton said. “It came together out of frustration with the medical model, [which] really didn’t provide the tools for intervening in the broader forces that were creating inequity in our society.”

“It starts with this notion that when you see premature death, whether it be infant mortality or shortened life expectancy, you think about diseases and injury and the burden of those things,” he said. “We spend a lot of time trying to change people’s behaviors with health education … and then we try to get them access to health care and intervene in the downstream cascade…. You have to think about what are the factors upstream that are working at the societal level.”

These consequences are systemic. It causes not just health consequences but also disparities in education and employment opportunities. “The solutions are about enlisting the very people who are experiencing those inequities, building their social, political and economic power, so that they can participate in reshaping these policies,”

Check out “A Tale of Two ZIP Codes,” a video from Health Happens Here that gives a practical example of how where you live can affect your health.