Disparities in the inner city 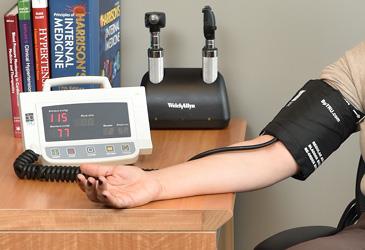 When the Urban Health Institute (UHI) at Cooper University Health Care first opened its doors in 2013, physicians and care teams had one common goal in mind: Improving the health of some of New Jersey’s most medically disadvantaged and underserved patients who live or receive medical care in Camden.

In a city where the murder rate is 12 times higher than the national average and nearly 40 percent of residents live in poverty, patients encounter daily challenges—beyond issues they may disclose in the exam room—that can compromise their health.

“Residents of Camden are living … with a median average family income of about $26,000,” said Rachel Adams, an advanced practice nurse at UHI. “So many of our patients are saddled with the challenges of … choosing between” crucial life necessities such as blood pressure medication or groceries to feed their children.

Roughly 50 percent of the city’s residents are black, and 47 percent are Hispanic, according to data from the U.S. Census Bureau. Adams noted that most patients “have lower health literacy in terms of their knowledge about basic health necessities” and “only about 56 percent of Camden residents have a high school diploma.”

To help address these disparities, Adams said Kathy Stillo, the executive director and co-founder of UHI, advised care teams to travel to India to learn about innovative solutions that would address the unique needs of Camden’s residents and ways to improve their health outcomes.

Stillo had previously traveled to the country and was aware of community-based care models developed by the Aravind Eye Hospital in Madurai, India, which serves a population of 26.7 million people across multiple districts, Adams said.

While in India, the UHI care team learned how care teams at Aravind conducted “task-shifting,” which allowed volunteers in local communities to assist care teams with tasks such as basic eye screenings “that were typically repetitive and took a long time for physicians to do,” Adams said. The goal of shifting these tasks was to free up time for “physicians to focus on what they were trained to do, which was the actual eye intervention and surgery.”

“Being able to see what [care teams at Aravind did] was really the impetus for our work,” Adams said. After returning from India, she and her colleagues developed a task-shifting protocol to help UHI physicians refer patients with hypertension to nurses for follow-up appointments and educational sessions that would help lower patients’ blood pressure.

How care teams at UHI tackled hypertension and disparities

The protocol has now been implemented as part of a pilot project to lower blood pressure among 74 patients at UHI—and it’s effectiveness is being demonstrated. In one year, 51 percent of these patients have attained their goal blood pressure of <150/<90 mm Hg. Meeting this target means patients “improved both their systolic and diastolic blood pressures,” Adams said.

What was the secret to their success? Adams recently shared insights on the project at a showcase of the Commission to End Health Care Disparities. She said physicians and care teams improved blood pressure control among some of New Jersey’s most vulnerable patients by:

AMA EdHub™️: The latest on perioperative cardiac care from SHM