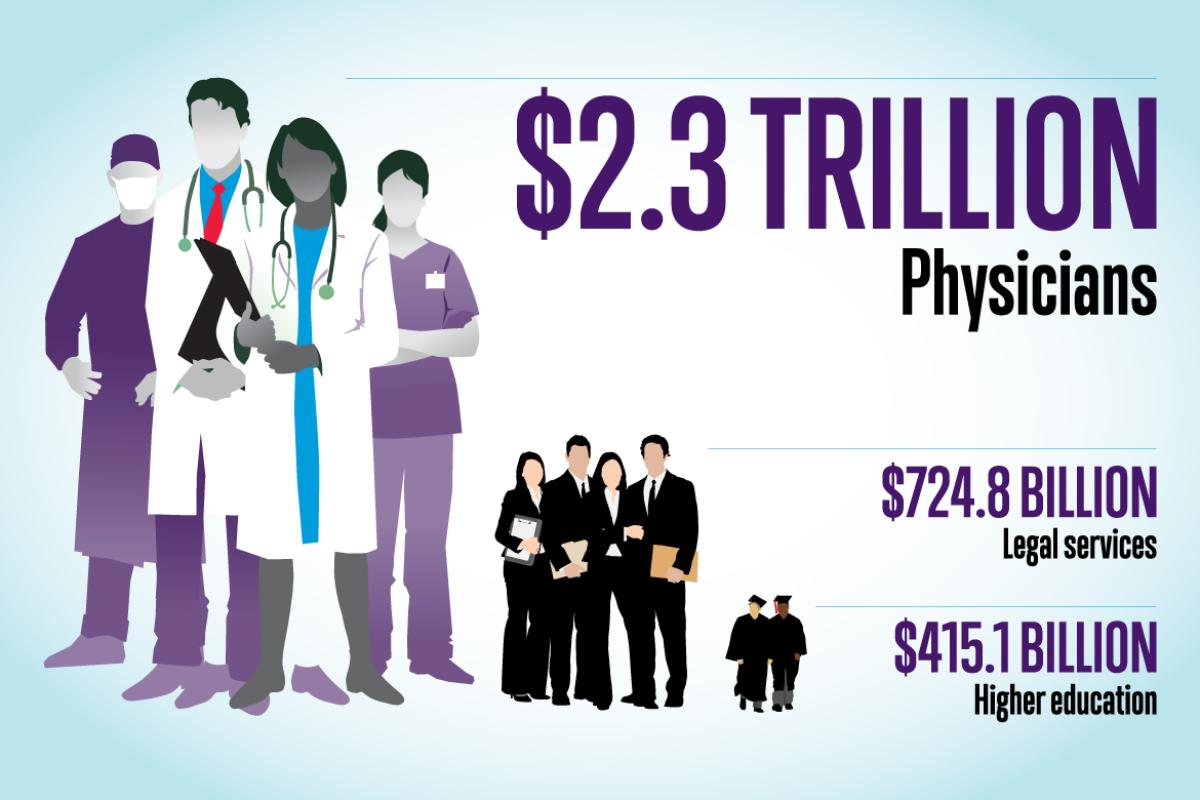 That detailed analysis is contained in the AMA’s latest physician economic impact study, which tracks the direct and indirect contributions physicians make to the economic prosperity in the states where they practice, and to the nation as a whole. The report is a project of the AMA’s Advocacy Resource Center, as part of its focus to support state and national medical societies in their work on behalf of patients and physicians.

Overall, the research found physicians, nationally, are directly and indirectly responsible for a $2.3 trillion contribution to the nation’s economy and the support for nearly 12.6 million jobs. But the greatest value of the report is that it details those contributions down to the state level, where many government decisions are made about the day-to-day practice of medicine, including Medicaid funding and medical liability reform. Visit PhysiciansEconomicImpact.org to explore an interactive national map and discover the economic impact of physicians in your state.

The comparative economic data on other industries was gathered as context.

Physicians play “a vital role in the state and local economies by creating jobs, purchasing goods and services, and supporting state and community public programs through generated tax revenues,” states the report.

When clinical and administrative staffers work alongside physicians, they are often in positions that are stable, pay well and are immune to being shipped overseas. As the report notes, the data collected suggest, “that physicians compensate their employees well, who in turn, are able to purchase services from other industries in the state, and therefore stimulate their state economy.”

With rare exceptions, the economic contributions of the medical profession far outpace the comparator industries. In determining the overall figures, the report used state- and industry-specific multipliers. Economists apply them to direct figures—such as, the number of workers employed by or alongside doctors—to determine the number of indirect jobs an industry supports.

Read on for the key results.

Wages and benefits. Overall, physicians supported $1 billion in wages and benefits. Legal services was in second place at roughly a quarter of that figure—$254.5 billion—followed by nursing and community care facilities ($191 billion), then the higher education ($159.9 billion) and home health industries ($94.9 billion).

The only across-the-board exception to those figures was for the legal services industry in only one setting—the District of Columbia. There, perhaps predictably, lawyers supported more economic output, jobs, wages and benefits.

Broken down to the state level—using California, the largest state, as an example—the figures show that the nearly 90,000 patient-care physicians in the state supported $232 billion in total output, 1.2 million jobs—433,725 directly—and $135.3 billion in wages and benefits overall.

Among the comparator industries in California, law accounted $78.9 billion in total output, more than 435,000 jobs and $29.1 billion in employee compensation. Higher education and nursing and community care facilities were in the middle of the pack, most often less than half the figures for law. At the low end was home health with a total output of $13.9 billion, 178,000 jobs and $6.1 billion in wages and benefits.

IQVIA, working on behalf of the AMA, performed the data collection and analysis. The physician component of the study was based on data covering nearly 750,000 active, patient-care physicians, in both office-based and hospital-based settings. Previous reports were released in 2011 and 2014.