Hospital and health system CEOs, federal officials, administrators, senators and other experts in the medical field were named to Modern Healthcare’s annual list of the 100 most influential people in health care. Many of those who made the list were physicians. Among this year’s honorees, 14 are AMA members.

AMA Executive Vice President and CEO James L. Madara, MD, was named to the list. Dr. Madara is recognized for the AMA’s focus on reshaping medical education. In May, the AMA announced that 37 schools were participating in the $15 million AMA Reimagining Residency initiative, an outgrowth of the AMA Accelerating Change in Medical Education initiative.

Vivian Lee, MD, a radiologist and president of Verily Life Sciences in Cambridge, Massachusetts, also made the list. Dr. Lee is recognized for her work with clinical and engineering teams to develop products and platforms for health systems. Dr. Lee also oversees Google Health. Verily began a joint venture with Sanofi on diabetes and is expected to expand into other chronic diseases.

The trade magazine’s list of influential people is chosen by peers and the senior editors of Modern Healthcare. Everyone on the list is determined to be the most influential in the industry in terms of leadership and their impact on health care.

AMA president: Physicians have an obligation to be leaders

These physicians and AMA members are joined by notables such as Amazon CEO Jeff Bezos, Centers for Medicare & Medicaid Services (CMS) Administrator Seema Verma, and Health and Human Services Secretary Alex Azar. The honorees were nominated by their peers and voted on by both readers and senior editors of Modern Healthcare.

Other AMA members include:

5 big medical court cases that made a difference this year

Read about this year’s top physician leaders and see the full list at Modern Healthcare.

Visit MembershipMovesMedicine.com to learn more about other AMA members who are relentlessly moving medicine through advocacy, education, patient care and practice innovation, and join or renew today. 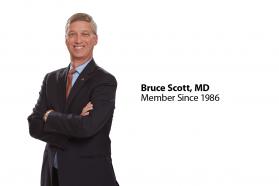