If you’re preparing for the United States Medical Licensing Examination® (USMLE®) Step 2 exam, you might want to know which questions are most often missed by those taking the practice test. Check out this example from Kaplan Medical, and view an expert video explanation of the answer. Also view all posts in this series.

A 71-year-old man is brought to the emergency department by his relatives. According to the patient's relatives, he has a history of recurrent deep venous thrombosis and has been on warfarin for several years. He has always been compliant with his medication. He does not have any history of hypertension, diabetes, hypercholesterolemia, or heart disease.

On examination his blood pressure is 170/60 mm Hg, heart rate 60/min, respiratory rate 14/min and temperature 37 ºC (98.6 ºF). He is confused and not oriented to person, time or place. His pupils are sluggishly reactive to light. Neurologic examination shows 3/5 strength in the left upper and lower extremities. Deep tendon reflexes are brisk on the left side. A CT scan of the head shows an intraparenchymal hemorrhage in the right temporoparietal region. Laboratory workup shows: 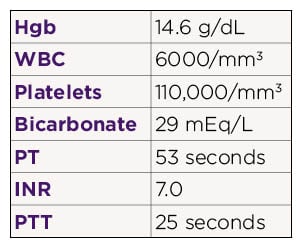 Which of the following is the most appropriate next step in management?

A. Continue oral warfarin after inserting a nasogastric tube

B. No further treatment is needed

Giving vitamin K is also appropriate in this setting because it reverses the anticoagulant effect of warfarin. However, it takes several hours for this effect to take place. It would, therefore, be appropriate to give fresh frozen plasma first and then vitamin K (choice C).

Continuing warfarin (choice A) or offering no further treatment (choice B) would be inappropriate because the patient has a significant intracranial bleed and has an inappropriately high INR level.

The patient's hemoglobin is within normal limits, and transfusion of packed RBCs (choice E) would not be helpful in this setting.

One tip to remember

One tip to remember

For more prep questions on USMLE Steps 1 and 2, view other posts in this series.