A previously healthy 64-year-old woman is brought to the emergency department because of substernal chest pain, nausea, diaphoresis, and fatigue. Her temperature is 37.1°C (98.8°F), pulse is 96 beats per minute, respirations are 18 a minute, and blood pressure is 138/92 mm Hg. A cardiac examination reveals an S4 gallop but is otherwise unremarkable. Her lungs are clear. Her ECG shows a ST-segment elevation in the inferior chest leads (leads II, III and aVF). In the figure, “N” denotes cardiovascular status in a normal, healthy person at rest, and the circled numerals denote various deviations from this state.

Which of the following choices best corresponds to this patient's cardiovascular status?

The correct answer is F.

The patient is experiencing an acute myocardial infarction, as evidenced by ST-segment elevation in the inferior chest leads. ST-segment elevation is caused by an injury current that flows between ischemic and healthy areas of the resting myocardium. Infarction reduces overall myocardial contractility, causing the CFC to shift downward and to the right (see [a] in the figure below). 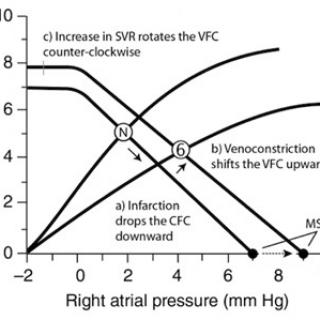 Venoconstriction decreases the capacity of the venous reservoirs and raises central venous pressure, forcing blood forward toward the right atrium. RAP rises as a result, increasing left ventricular preload and thereby helping to compensate for the loss of inotropy. Venoconstriction shifts the VFC upward (see step [b] in the figure above) and establishes a new mean systemic filling pressure (MSFP). The MSFP is the pressure that exists in all parts of the vasculature after CO has been arrested and the arterial and venous compartments have come into equilibrium. MSPF is a measure of the "tightness" of the vasculature.

Sympathetic activation following an ischemic event helps maintain MAP until long-term pressure-regulatory pathways have had a chance to activate fully (about 8–24 hrs). This involves expanding extracellular fluid (ECF) volume through activation of the renin-angiotensin-aldosterone system (RAAS).

The figure below summarizes some common scenarios that cause shifts in the CFC and VFC. 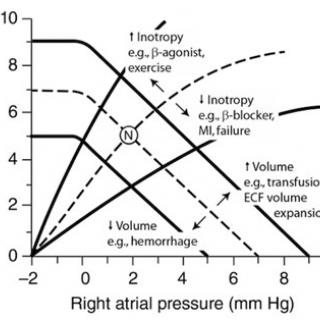 Choice A: Point 1 falls on the intersection of a normal VFC and a CFC that has been shifted upward through an increase in ventricular inotropy, as might be expected from administering a beta-agonist.

Choice B and C: Point 2 falls on a VFC that has shifted downward and rotated clockwise, suggesting a simultaneous decrease in venous and arterial tone. Such changes occur when sympathetic output falls, but the lack of any change in the CFC makes this intersection unlikely physiologically. Instead, one would expect to see cardiac inotropy and heart rate fall in parallel with vascular tone, such as seen at the intersection indicated by point 3.

Choice D: Point 4 might represent the cardiovascular status of an individual engaged in mild anaerobic exercise, such as weightlifting. Cardiac inotropy has increased, along with venoconstriction and an increase in SVR.

Choice E: The intersection represented by point 5 is unlikely physiologically. The VFC has shifted upward and rotated counterclockwise, indicating venoconstriction (or an ECF volume increase) and an increase in SVR. Cardiac function is unaffected.