Do you know how many of your peers end up in the field they picked when they began medical school? Which specialties are students most likely to stick with, and which ones attract students along the way? We break down the statistics.

Chances are you will end up in a different medical specialty than the one you had picked out when you first set foot on campus.

Just 1 in 4 medical school graduates ended up in the same specialty they picked the summer before they started medical school, according to a recent report from the Association of American Medical Colleges. That statistic is based on information from 10,353 students who indicated a specialty preference on the 2015 Graduation Questionnaire (GQ) and participated in the Matriculating Student Questionnaire (MSQ) they were invited to complete the summer before the first year of medical school.

Slightly more than one-half of the students who indicated a preference on the MSQ ended up in a different specialty than the one reported before gross anatomy and clinical rotations, the data showed. Another 15 percent were undecided when they took the MSQ, while 7 percent of the students had no MSQ response.

Rounding out the top five specialties with the highest percentage of graduates pursuing their initial preference were:

Among the 2,033 going into internal medicine or a subspecialty, 26.3 percent initially said they wanted to pursue that specialty. 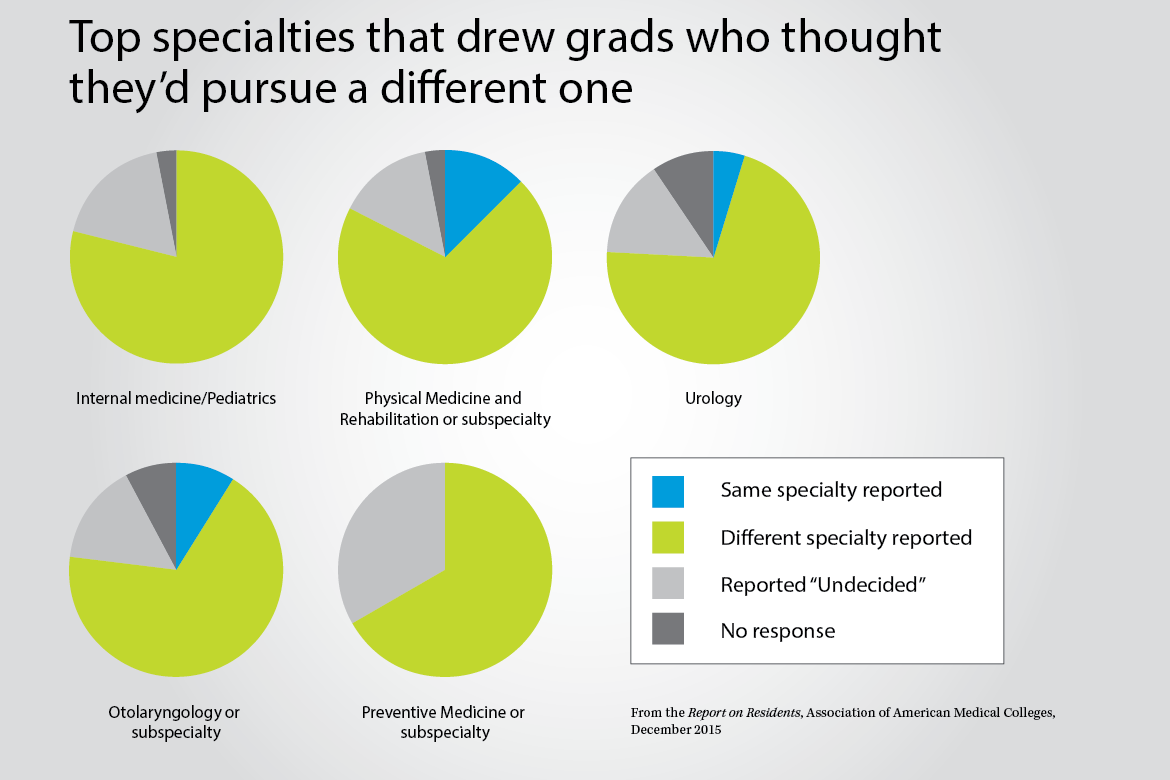 Internal medicine/pediatrics had the largest percent of students who indicated a different specialty before they started medical school, with 78.9 percent thinking they would pursue a different field. The other top specialties with students who originally thought they would go into a different type of medicine were:

Slightly less than one-half of the more than 2,000 graduates going into internal medicine and its subspecialties reported a different specialty interest before starting medical school.

Guidance in choosing a specialty

Students at the 2016 National Medical Student Meeting can talk to physicians about their practices during the AMA Medical Specialty Showcase and Clinical Skills Workshop scheduled for June 11 from 11:30 a.m. to 1:30 p.m. Practicing physicians will share information that can help students learn more about their preferred specialties, and students also can practice such clinical skills as ultrasound, airway management and suturing.

AMA Wire’s “Shadow Me” specialty series helps students evaluate specialties in which they are interested by providing insights directly from physicians in a variety of specialties.

Students also can read more AMA Wire posts on specialty selection, including what students often overlook when choosing a specialty, which specialties drew the most students and which were the most competitive.