From patient to patient and from hospital to home, physicians have to toggle back and forth between the emotional and rational parts of their minds to be effective in both establishing a therapeutic relationship and logically determining the best course of treatment. But how do you find the appropriate balance?

In a piece for the New York Times Well blog titled, “Death and sandwiches,” Dhruv Khullar, MD, a resident physician at Massachusetts General Hospital in Boston, investigated a skill that physicians develop over the course of their training—toggling between the rational and emotional sides of their minds.

This dichotomy allows physicians to be empathic and compassionate with a patient, which helps them understand their concerns and condition, and at the same time gives them the ability to switch to a more rational, logical side to determine the best course of treatment to help that patient. AMA Wire® spoke to Dr. Khullar about the essence of this tension and the need to perfect the art of balance.

What it means to “toggle”

What it means to “toggle” 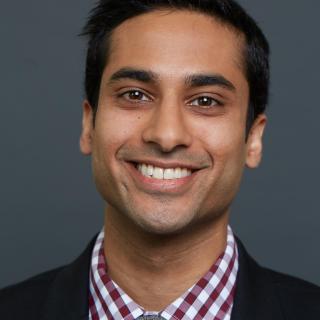 “I think it’s hard, and it’s something that you hone over time,” he said. “The first few times you see someone or something, you approach it in a very emotional way because many of these situations are difficult and trying. Patients are really going through a lot, so it really strikes you.”

“Over time you learn to toggle back and forth a little better or start to blunt this emotional response, and so the visceral feelings that you have become less at the forefront and the more rational side takes over,” he said, “which I think has both its pros and cons.”

“Now, after two or three years of being in residency, I’m starting to evolve to that side of things,” Dr. Khullar said. “The tension now is to try to bring a perfect balance and come back to the middle, where you’re able to explore both sides of yourself when you’re meeting a new patient and you’re in difficult situations.”

“The danger sometimes becomes that we shut one part of ourselves down,” Dr. Khullar said. “Usually that’s the empathic part, the emotional part, because it is less visible.” Part of the therapeutic relationship is trying to understand how an illness is affecting a patient’s life and what they’re missing out on because they’re sick, he said. Yet, it’s important to focus on the rational as well in order to help the patient.

For example, “after the first few codes you’ve been to, you know the drill and automatically flip into this rational, algorithm kind of person,” he said. “It’s not until afterward that you realize this has been a really traumatic experience for yourself, your colleagues and the patient.”

“It’s something that most doctors have to contend with, and there are innumerable ups and downs,” he said. “There are some really trying situations that you’re witnessing with patients and their families and what they’re going through. … At the same time, you have to think, and you have to apply, and you have to operate, and you have to learn to distance yourself emotionally in order to be an effective clinician.”

“There’s this pretty profound tension that occurs in the hospital, ED or the clinic between getting wrapped up in the emotions and the trauma of your patients’ lives and at the same time trying to create enough distance to think clearly about what the most effective next diagnostic step would be,” he said.

“We often hear that we need to merge the art and science of medicine,” he said, “that we need to bring both of these rational and empathic aspects to bear when we’re caring for patients.”

One study that looked closely at physicians’ brains while they watched someone experience pain shows “that it’s very difficult—if not impossible—to merge those things in the same moment,” Dr. Khullar said. “When you’re thinking in a very rational way, you’re probably not feeling as much, and when you’re feeling and you’re expressing that part of yourself, you’re not thinking as well.”

That skill over time becomes “recognizing, being self-aware of which mode of thinking you’re employing right now and is that the appropriate one?” he said. “It’s a pretty personal process, and at the end of the day, it’s a balance, a spectrum that we exist on from rationality to emotionality … and most people find themselves closer to one end of the spectrum.”

Dr. Khullar offered three tips that have helped him understand the importance of toggling back and forth between emotion and logic:

Many people start out naturally on one side or the other—emotional or rational, Dr. Khullar said. “The work that people have to do is try to come back to the center, or try to know when to employ one aspect or the other aspect.” “People have natural tendencies toward one,” he said, “but everyone needs to work on exploring that other realm as well.”

Reflect on what you experience

For Dr. Khullar, writing has been an outlet to reflect and express the emotions of the day. “I write … to understand what’s going on not only around me but also what’s going on inside of me,” he said.

“It doesn’t necessarily have to be something like writing or another creative outlet,” he said. “During medical school I wasn’t writing as much, but every Sunday we’d have a group of four guys who would sit around for one hour, put our smartphones away and … we’d talk about what went well that week, what didn’t go well, difficult patient experiences, good patient experiences and that hour, to me, was tremendously enriching.

“It’s important for everyone to know they’re not alone,” he said. “When you start opening up to your colleagues, other residents, other medical students, you’ll find that most people are going through similar feelings and sensations to a lesser or greater extent.”

It’s OK to take time for yourself

The issue of balance exists not only within the hospital between the emotional and rational modes of thinking but also between personal and professional life. “You’re pronouncing someone dead in the afternoon, and then you’re leaving and going to have dinner with your friends in the evening,” he said. “It’s very strange.”

“Having the space and creating the time and having people with whom you can discuss what’s really a strange experience for everyone is important,” he said. “Only by engaging that dialogue by journaling or writing, having small groups, or talking to your family about it—only then can you observe these small changes that are occurring in ourselves every day, every month of training.”

At the end of the day, taking this time to cultivate your own well-being makes you a better physician and caregiver, he said. If you take the time for yourself, when you go back into the hospital the next time your patients will be better off because of it.

As part of the AMA’s annual residents and fellows Facebook “Welcome to residency” campaign, Dr. Khullar participated in a tweet chat, where he discussed with participants how residency changes you as caregiver and a person.

4 lessons for residents on sleep, resiliency and well-being
At pandemic peak, 1 in 3 resident doctors in NYC experienced burnout
How resident physicians can assess and plan to boost well-being
Featured Stories