A University of Michigan Medical School student, Sagar Deshpande, noticed a trend emerging in the student experience. He heard colleagues repeatedly voicing frustration at having spent time on methodologically sound research without getting their work published because their results were not what principal investigators had expected. So he had an idea: Why not start a medical journal run by students, for students’ own research?

Deshpande shared the idea with a fellow student, Spencer Lewis, and in 2014 the two approached a faculty member, Mike Englesbe, MD, in the Department of Surgery.

“I immediately appreciated how well it fit into a lot of the broader goals we’re trying to achieve with our new medical school curriculum, including fostering leadership and autonomy in students,” Dr. Englesbe said. University of Michigan is one of 32 member schools in the AMA’s Accelerating Change in Medical Education Consortium. “One of the keys was that early on we got aggressive buy-in from higher-level folks in the institution, especially my boss, who said, ‘Whatever it costs, we can cover it.’” 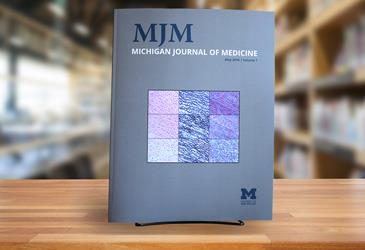 Dr. Englesbe realized the journal could also provide opportunities for students to learn how to write, edit and talk like scientists. Previously, there were few specific opportunities for this kind of learning in medical school. Most of it came later, on the job, with no formal structure.

He contacted a colleague in the medical school, Jasna Markovac, PhD, who had years of experience in journal publishing and runs the Learning Design and Publishing group within Health Information Technology and Services. Together, Drs. Engelsbe and Markovac created a new course for fourth-year medical students, Medical Editing and Writing, which included significant hands-on journal work.

“The journal in some ways would be the ‘lab’ part of the course,” Dr. Markovac said. “It’s all about how to express yourself, what makes a good paper, how to do peer review, the whole end-to-end workflow.”

They needed a publisher too, so Dr. Markovac looked across campus to Michigan Publishing Services, a unit of the University library, which had published various journals on behalf of learned societies but hadn’t done much journal publishing with the medical school.

Meanwhile, Dr. Englesbe recruited a fourth-year medical student, Shannon Cramm, to serve as the journal’s first editor-in-chief.  She then assembled a team of about 30 student editors and reviewers.

“Having been on the research side but never on the publication side, the logistics of how one actually publishes a journal were very unfamiliar to me and to the rest of our editorial staff,” Cramm said. “So establishing that relationship [with Dr. Markovac and the library] was essential to our success.”

Putting it all together

Putting it all together

Students were empowered to run every aspect of the journal and make all decisions.

“The most important thing in a new idea like this is to keep your ear to the ground,” Cramm said. “Over the course of the year, we found shifts in what was needed. Eventually, we learned that some students wanted to be able to publish their parts of larger projects as the first author, to get experience writing manuscripts and working with reviewers and review teams.”

Dr. Markovac’s staff and the publishing services staff from the library provided guidance and kept students from being tripped up by things they wouldn’t necessarily know.

For example, in reviewing a draft layout of the first issue of the journal, Dr. Markovac noticed that the attribution of authors in the table of contents was irregular, not something she had ever seen.

“I was thinking, ‘Hmm, now this is a teachable moment,’” she said. “‘Let’s teach them exactly how papers are called out in tables of contents and what the differences are between medical and nonmedical journals.’ For example, readers expect medical journals will be eight-and-a-half by 11 inches when formatted and printed, whereas humanities journals can be much smaller. Students don’t empirically know that, but if they’re going to run a journal, they need to know all of those things.”

Delivering more than a publication

Delivering more than a publication

The first issue of the Michigan Journal of Medicine (MJM) was published in May. It was the culmination of a full school year’s work and was the editorial team’s final product.

“I heard over and over from student reviewers and editors what a unique experience this was,” Cramm said. “It has definitely made me a better scientist, better at critically analyzing literature and a better scientific writer. It has only furthered my passion for academics and for research.

Drs. Engelsbe and Markovac’s hope is that this curriculum will become a full four-year experience. Part of their charge is to transform students—to empower them to think beyond taking care of one patient at a time. For some students, medical writing and editing would be a significant focus in their careers, but for most it would be a small but important part of what they do as they learn how to be successful, impactful physicians.

As they look to the journal’s second year, Drs. Engelsbe and Markovac are encouraging the new editorial team to try to publish two issues. The new editorial team and the infrastructure are in place—the submission system and production workflow are set up through the library, and there is institutional memory—so whether they will depends simply on how many manuscripts they can get.

“The danger in starting student journals in general is that when the students graduate, the journal ceases to exist because there’s no one to take it over who has the same enthusiasm,” Dr. Markovac said. “The advantage of this is that it is now part of the curriculum, and we have other people in addition to the students who are involved who are very dedicated. So we’re seeing a long shelf life here.”

The experience has also been helpful to the library’s publishing services staff who weren’t previously very familiar with medical publishing, and it has furthered one of the university’s priority initiatives: cross-campus collaboration.

“The nice thing about the MJM story is that people who are not intimately involved with journal publishing or the curriculum can actually understand what we are doing and can appreciate it,” Dr. Markovac says. “That’s been the attraction across campus. It’s a good story that’s easy to tell.”

For more on the Accelerating Change in Medical Education Consortium

For more on the Accelerating Change in Medical Education Consortium

Up
59
More about:
From poster to print: Get published as a medical student, resident
Poster presentation 101: Make your work stand out at a conference
How future physicians can make their medical research stand out
Featured Stories

What doctors wish patients knew about COVID-19 vaccines and pregnancy

What physician borrowers should know about loan repayment in 2022