Removing prior authorization for MAT results in more patient care

The AMA Opioid Task Force strongly supports removing barriers that stand between patients and medication-assisted treatment (MAT) for opioid-use disorder (OUD). Prior authorization for MAT has potentially dangerous consequences for patients who are forced to delay care or are denied treatment because of administrative barriers.

Yngvild Olsen, MD, MPH, who is a member of the Maryland State Medical Society (MedChi) Opioid Task Force and co-chair of the MedChi Addiction Committee, recently spoke with the AMA about the devastating effects these prior authorization policies can have.

“Patients would go to the pharmacy only to be told that their [buprenorphine] prescription couldn’t be filled,” Dr. Olsen said. “I would get frantic calls from patients after they’d been denied their medication. I had one woman say, ‘What am I supposed to do today?’ She was on her last dose of medicine.” Ninety-nine percent of the time prior-authorization requests are approved, so the delay is a senseless bureaucratic hurdle that can be the difference between continued recovery and relapse for vulnerable patient populations.

Medicaid took the initiative to drop prior authorization for MAT, she said, but this still left barriers in place for commercially insured patients. To address the problem the Maryland-DC Society of Addiction Medicine partnered with MedChi and proposed a bill to have prior-authorization requirements for MAT lifted for commercial insurers.

“There was no opposition to this bill,” said Dr. Olsen. “The commercial payer lobbyist was so excited that they were doing this, he went in and hugged the lobbyist from the state medical society. Medicaid was the driver of change in the commercial market, and they did that by setting the precedent.”

“We think that everyone got on board because of the focus on supporting high-quality, evidence-based medical treatment,” Ransom said. “Working with policymakers and others, we all agreed that it was time to put aside any differences we might have and support patients getting the care they need. This is a common-sense solution that doesn’t cost any money, and it should be this easy to do this everywhere.”

Changes overdue on how substance-use disorders are covered, treated

House Bill 887 prohibits carriers that provide coverage for prescription drugs from applying a preauthorization requirement for medication used for treatment of an OUD and was signed into law in 2017.

Almost immediately, Dr. Olsen saw the difference this change made in her practice. No longer does she have to spend hours a week answering panicked phone calls from patients at the pharmacy, and then making calls to the insurer and pharmacists to try and straighten it out. But the biggest change was removing the fear of “Will I be able to fill my prescription?” for her patients.

Learn more about what the AMA is doing to end the opioid epidemic. 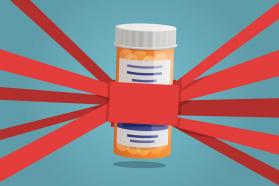 Prior authorization needs fixing. How it’s happening in the states.