Payers’ prior-authorization (PA) requirements delay treatment, have a negative impact on clinical outcomes and lead patients to abandon treatment, say the results of an AMA survey of 1,000 practicing physicians.

There was near-universal consensus (92 percent) among physicians that prior authorization has a negative impact on patients’ clinical outcomes. Sixty-one percent said that negative impact is “significant.”

One of the principal ways prior authorization affects patients is by delaying care. Again, the vast majority of physicians surveyed—92 percent—said patients whose treatment requires PA experience care delays sometimes, often or always.

Prior authorization, a health plan cost-control process, restricts access to treatments, drugs and services. This process requires physicians to obtain approval prior to the delivery of the prescribed treatment or ordered service in order to qualify for payment.

Patients discouraged by prior auth

Patients discouraged by prior auth

There has been an “explosion” in prior-authorization requirements and it is “extremely frustrating for our patients,” Jack Resneck Jr., MD, chair-elect of the AMA Board of Trustees, told AMA Wire®.

“Because of the rapidly changing requirements and the number of health-plan drug lists, it’s often difficult for physicians to know which insurers will require PA for a given medication in a particular patient, so the PA process often begins when a patient learns from the pharmacist that their medication requires further approval,” said Dr. Resneck, a dermatologist and health policy expert from the San Francisco Bay Area.

“My patients sometimes face delays of several days to receive their medication, leaving their condition untreated while they wait, and end up making additional trips to the pharmacy,” he added.

That is not uncommon, physicians reported. Thirty percent of the doctors surveyed said that, on average, they waited at least three business days for a PA decision from a health plan during the previous week. Nearly two-thirds of physicians—64 percent—reported waiting at least one business day for payers to decide on a prior-authorization request. 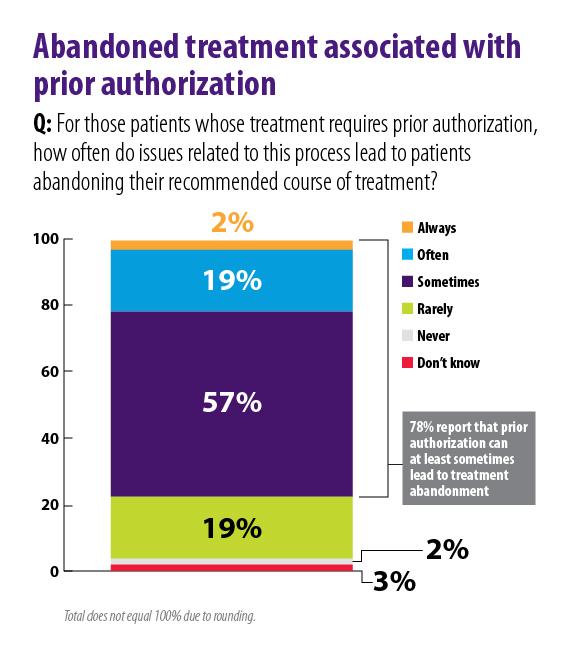 The results come from a 27-question web-based survey answered by 1,000 practicing physicians who provide at least 20 hours of patient care weekly. Forty percent were primary care physicians, and 60 percent were specialists.

In addition to delaying treatment, the PA process often discourages patients from following their physicians’ advised course of action. Nearly 80 percent of physicians said patients sometimes, often or always abandoned the recommended test or treatment because of issues related to prior authorization.

The AMA’s Patients Action Network is raising awareness about prior authorization among the 1.3 million patient activists who have become members of the network. Your patients are invited to share their story about how PA has affected their care and join the AMA’s efforts to spur meaningful reform.

The statement outlines five areas of improvement where the organizations said meaningful reform could be achieved. These include supporting continuity of care and improving transparency and communication related to the PA process.

“Continuity of patient care is vitally important for patients undergoing an active course of treatment when there is a formulary or treatment coverage change and/or a change of health plan,” says the statement, also signed by the American Hospital Association, American Pharmacists Association and the Medical Group Management Association.

The statement includes an agreement by the organizations to “support continuity of care for medical services and prescription medications for patients on appropriate, chronic, stable therapy through minimizing repetitive prior-authorization requirements.”

“Many conditions require ongoing treatment plans that benefit from strict adherence,” the document says. “Recurring prior authorizations requirements can lead to gaps in care delivery and threaten a patient’s health.”

AMA resources include model legislation that addresses many of the concerns highlighted in the survey. Through the Physicians Grassroots Network and the Patients Action Network, the AMA is giving patients and physicians a way to share their experiences with prior authorization and add their voices to advocacy for reform.