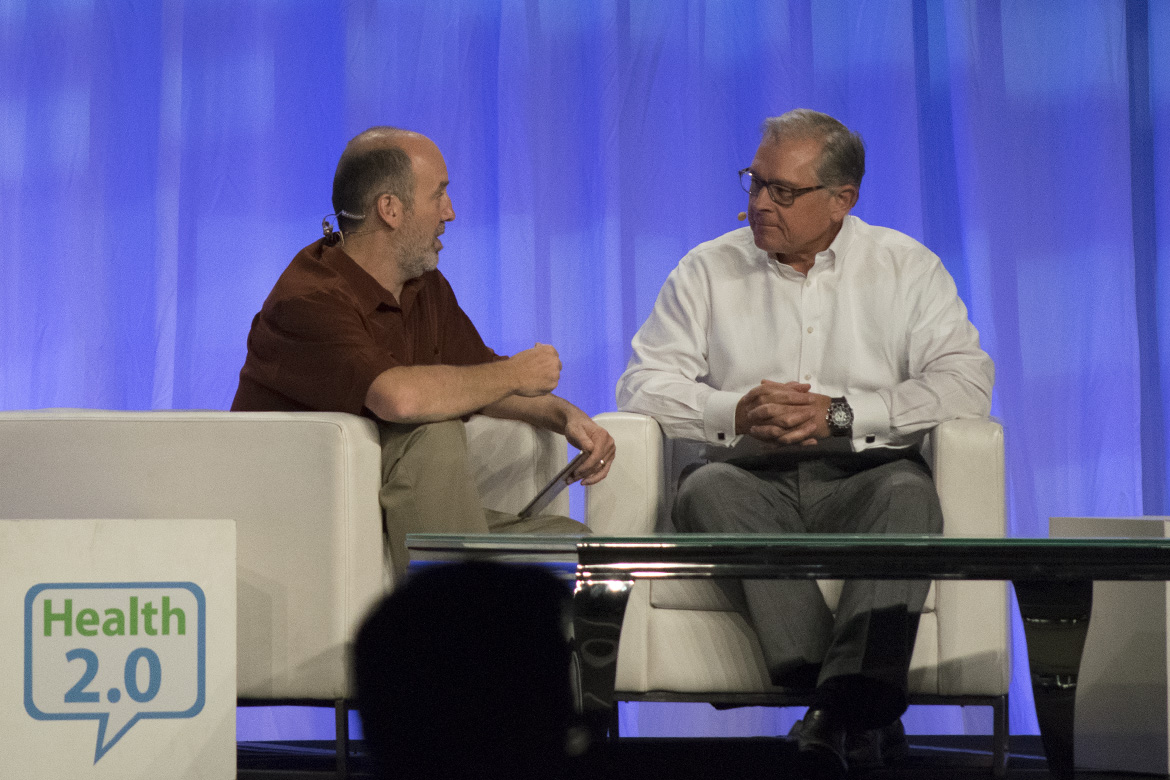 There are tools that work and there are tools that do not, but it’s important for the health care industry to decide what is required of these technologies for the future. And that means patients, physicians and developers working together. AMA Chief Executive Officer James L. Madara, MD, sat down with Matthew Holt of Health 2.0 at the annual conference yesterday to discuss the future of health care technology.

On center-stage during the first day of the Health 2.0 conference in Santa Clara, Calif., Matthew Holt, co-chairman of Health 2.0, asked Dr. Madara about his past comments on digital health tools and what needs to be done so that they work in clinical practice to enhance patient care.

Holt: The first thing that you said was that we have a bunch of remarkable tools already, which doctors are using … often there is at least dispute about the clinical efficacy of some of those tools.

Is it fair to say that you’re saying that stuff is all well and good or do you have any doubts, issues or problems with those?

Dr. Madara: There are issues with all of these things, Matthew. The issue that I was trying to raise, by the way thank you for noticing, [is] that in the ‘do you love us, do you hate us’ … there is love in it. Let me give you an example of love and an example of hate. The love is that physicians want to engage digital health, [our survey demonstrates that]. And the reason they want to engage digital health is for better outcomes for patients and better work flows. We have developed digital solutions—STEPS Forward™ for physicians’ offices to engage patients, helping physicians plan so that when the patient comes in it will be a collaboration.

We’re working with [Omada Health and Intermountain Health to fight prediabetes]. So we’re engaging digital broadly and we love that. What we love about it, take Omada as an example, there are many others, [Omada is] evidence-based, validated, it is actionable, it improves patient care, there are outcomes measures. Having said that let me tell you what we don’t like.

Digital health is rapidly emerging. This conference is wonderful because it stretches the thinking as conferences should, but it also has a little sense of woebegone, everyone is above normal, there are no problems, but there are a few problems and I’d like to name some of them.

Instant blood pressure … was one of the best-selling, highest downloaded apps from the app store in 2014-2015. In the digital health literature, your magazines, it was criticized as not being accurate. JAMA did a scientific study … that showed that if you took everyone with hypertension and you did readings with this app, 80 percent of the hypertensives would be called normotensive. Hypertension is the number one killer in the United States.

What one has to recognize is that health care is not a normal market. You put a leaky faucet out there, the market is efficient, people stop buying it, no harm no foul except for a minor investment. In health care it’s different. If something doesn’t work there is potential patient harm.

Holt: The usability of the average EMR tends to be that pretty much all the clients say they want to go back to the 1990s. When you say digital health … do you regard it as all the same?

Dr. Madara: No one wants to go back to paper. In the late 80s when I was a faculty member at Harvard we were always thinking about this solution and it would be wonderful when x-rays wouldn’t be in someone’s trunk, you could read each other’s notes, it could all be organized with the push of a button.

A recent [time-motion] study that we did with Dartmouth … showed that 50 percent of a physician’s time now during the day is spent on data entry and only a third on interacting with patients. And patients feel that, and also complain about that.

That 50 percent, it does not give the meaning to the career that the other 30 percent does and it leads to burnout.

Holt: I agree. No one’s debating that. The patient community sites … the patient self-education sites, a lot of things, which let’s be fair, back in the olden days the AMA was saying don’t trust the website, trust your doctor, but I have one issue or frustration with that. Most of those were founded because somebody had a problem, sought a technological solution, because the health care system and solutions weren’t giving them what they need.

A lot of this patient-activated and consumer health movement, a lot of it’s a scam, you’ve got the guys selling digital snake oil, that’s still around, we’re not rid of that completely, but nonetheless you’ve got to realize there’s a real pain there and that a solution is needed.

Dr. Madara: There are two points I’d like to make around that, Matthew. The first is you’re absolutely right, and not only patients but physicians haven’t been involved as deeply as they should be in solutions. I think if the patient community and the physician community would have been more involved in EHR rollout, we would have a different product.

And that’s why we have Health2047, our work with MATTER and these kinds of things. I think perhaps the more important point of the entire conversation is why raise a siren now with this intentionally used term—snake oil? And the reason is that I think we’re in a period of criticality for [digital health]. And the criticality is that there’s no regulatory framework.

Does anyone think that you’ll get to the future that was outlined here … without regulation? So you have two choices: You can self-regulate or let the government do it.

We work really well with government regulatory agencies. These are friends of ours, but let me tell you, they tend to be heavy-handed, they overreach, they’re not nuanced, and it’s one-size-fits-all.

If a community shows a responsibility to self-regulate, you can have a different story. We’ve done that in many areas [including the joint commission for hospital accreditation and a liaison committee for medical school certification, among many others].

We convened some stakeholders around this topic [and developed principles which we would have liked to announce at this meeting] but it’s not quite developed yet. The initial idea would be to establish some principles that the field … and then move that forward step by step to get to some self-regulating body that an agency under Health and Human Services (HHS) will say, yes, I will deem that authority.

Because what we have now, from the FDA point of view, are pretty loose criteria. An example of that is if you have a [digital health tool] and it’s to treat obesity, it probably goes to the FDA because it’s treating a disease. If you have a [tool] that’s for weight-loss, you’re home free.

So I think the most important thing is how you move through this period of criticality to get a self-regulatory framework that feels good to the industry and allows it to flourish and not have the noise and lost opportunities.

Holt: I think we all agree that that’s true; we need to figure out how to get to that place. We also have to work together… How are we going to get this done?

Dr. Madara: Our preliminary group … included physicians, patient-oriented domains, everything.… Now we’re getting another broader group that will have to get together … to establish principles that will or will not be accepted by the community and agreed upon and then keep working that. Because ultimately, I’ve got to tell you, if these things are as important to health transformation as we think that they are, there is not only going to be regulation but there will be a certification of some kind. That can be nuanced, flexible, it can be adaptive to the industry or it can be central-federal that usually doesn’t have the characteristics that I’ve just described.

Holt: How do we all get involved in that process?

Up
22
More about:
Digital health ventures to "serve the patient and serve the provider"
How managing COVID-19 "crystalized" operations for data & telehealth at UCSD
Open, accessible data is key to involving patients in their own health
Featured Stories