Psychiatrist Frank Clark, MD, remembers a Chicago summer spent at an Illinois Institute of Technology program that sparked his interest in science and a program at Northwestern University that ignited his passion for medicine. For Gricelda Gomez, the path to Harvard Medical School started at Los Angeles’ Bravo Medical Magnet High School, which gave her the opportunity to volunteer in a hospital and see medicine first hand in a cardiovascular lab.

Now Dr. Clark and medical student Gomez are headed into their communities to get kids thinking about the possibility of becoming a physician. On May 3 they will take part in the AMA’s National Doctors Back to School Day, a day for physicians and physicians in training to head back to high school, middle school and elementary school classrooms to inspire minorities to go into medicine, and ultimately work toward eliminating racial and ethnic health disparities.

“It allows me and many others to share our testimonies of how we became physicians,” said Dr. Clark, who practices in Christiansburg, Va., and is the vice chair of the AMA Minority Affairs Section Governing Council. “Some students may never encounter a doctor who looks like them. To see someone in a white coat that symbolizes compassion, integrity and resilience sends a powerful message and instills a beacon of hope for our future leaders. We want them to know that they have every opportunity to pursue their dreams.”

Gomez said she wouldn’t be where she is today if others had not taken the time to mentor her through the years.

“I have a responsibility to pay it forward,” said Gomez, who is in her fourth year of an MD-MPH program at Harvard and is the medical school representative on the AMA Minority Affairs Section Governing Council. “As physicians and as medical students, we have trust and weight in the community, and we should use that leverage to better our community and to make medicine better.”

Being the change you want to see

Dr. Clark encourages his colleagues to take the time from their schedules to reach out to children who are at impressionable ages and help them understand the steps they need to take in high school and college to become a physician.

“If we are strongly dedicated to the mission to eliminate health care disparities, then that starts with us,” Dr. Clark said. “If we want to increase the number of under-represented minorities in medicine, then we as individuals need to practice beyond the bedside and sow seeds of advocacy and leadership in our communities. If we are not seen by our youth, then it is a missed opportunity to engage them.”

Gomez noted that physicians and physicians in training shouldn’t underestimate just how influential a classroom visit could be: “It might be something that is an hour or two out of our day,” she said, “but for the kids, those hours could influence the trajectory of their lives.” 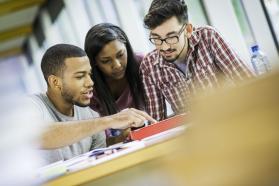