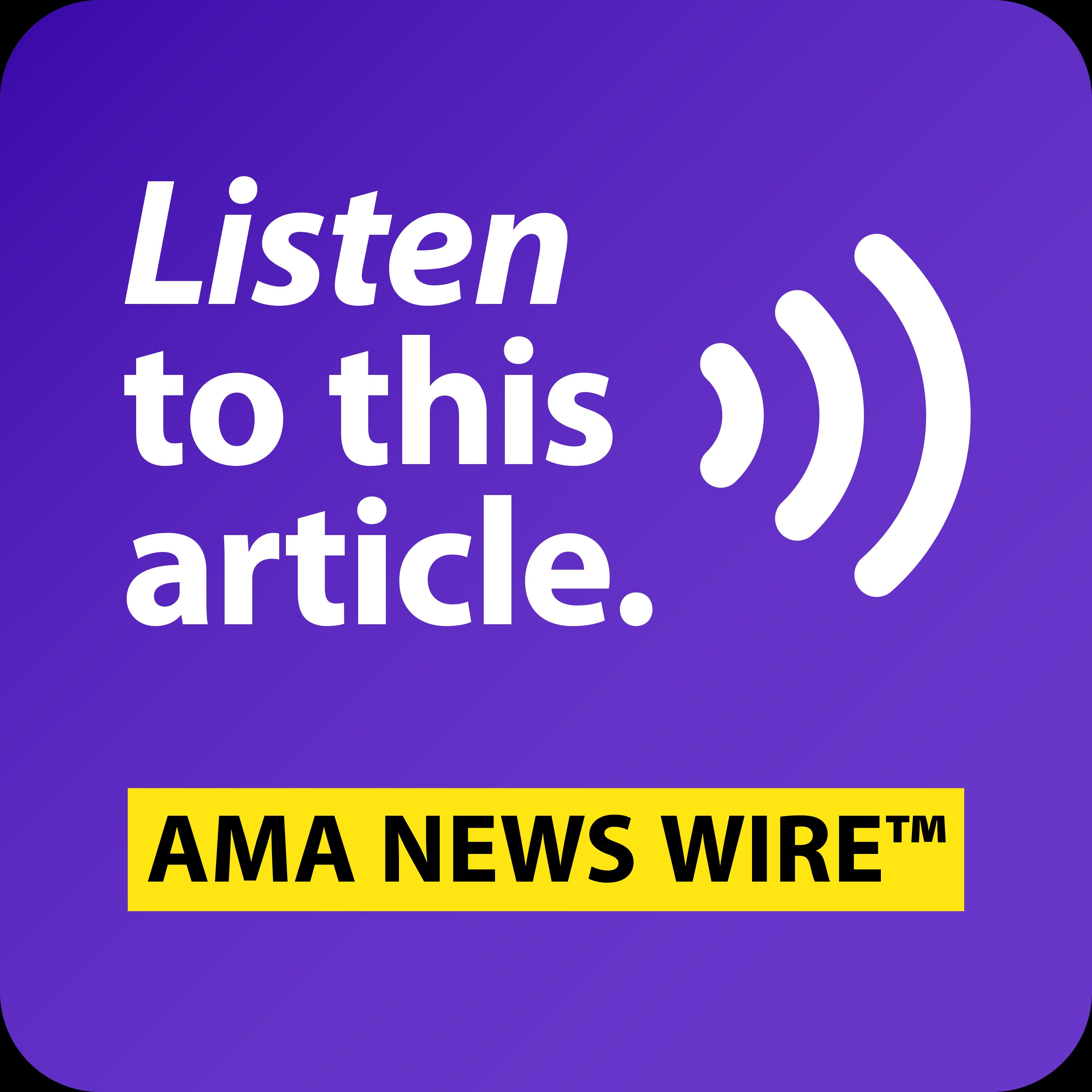 About 30 million people in the United States have sleep apnea, but only 6 million are diagnosed with the condition. This hasn’t improved with the pandemic either with many people experiencing less sleep because of altered life and work routines as well as higher stress levels. And with long COVID further exacerbating underlying conditions such as obstructive sleep apnea, it is important for patients to understand what is at stake. Two sleep physicians set out to help.

Join the fight on chronic disease

The AMA is leading the charge against chronic disease and premature mortality rates in the U.S. Be a part of these important efforts to improve public health.

The AMA’s What Doctors Wish Patients Knew™ series provides physicians with a platform to share what they want patients to understand about today’s health care headlines.

In this installment, two AMA members who are sleep medicine physicians shared what doctors wish patients knew about obstructive sleep apnea. They are:

Normal apnea-hypopnea index while a person is sleeping is five or less. This means a person’s airway completely collapses or partially collapses several times throughout the night.

“You may first start having sleep apnea—particularly obstructive sleep apnea—because you put on a little weight and you start to have maybe five or seven episodes of sleep apnea per hour, it may not bother you too much,” Dr. Chediak added. But then “as years go by, you’re a little heavier, you have more bad behaviors, you’re a little older and sleep is more fragmented so now you feel tired.”

“Daytime tiredness is blamed on aging and changes in lifestyle, rather than a disorder of sleep, until you are having many episodes of sleep apnea per hour and you’re tired all the time or you’re falling asleep driving,” he said. “That’s when it becomes critically apparent that you need help.”

Your airway closes or narrows

Your airway closes or narrows

“Sleep apnea is essentially a disorder where while we’re sleeping at night, the airway either closes off completely or becomes so narrowed that the oxygen level drops,” said Dr. Rosen. This occurs “because not enough air gets in. As the oxygen level is dropping—maybe not to dangerous levels—the brain says, ‘Hey, you’re going to do this thing I don’t like” and wakes you up.

When “your airway completely closes, it is called an apnea, and when it’s narrowed but not closed off and  has a consequence—such as a drop in oxygen or arousal—it’s called hypopnea,” she explained, noting that “we count them the same and we add them together over the course of a night to make an hourly rate.”

“If your hourly rate is five or more a night, that is likely a sign that you have obstructive sleep apnea,” Dr. Rosen said.

A bed partner is the first to notice

A bed partner is the first to notice

“It’s typically hard to notice on your own” if you stop breathing throughout the night and have sleep apnea, said Dr. Rosen. “What you’ll notice is that you feel sleepy. Some people will notice that they wake up during the night feeling like they’re gasping or choking or even have to go to the bathroom at a lot at night.

“That may be a sign of sleep apnea, but it is hard to know yourself what any one of those things mean,” she added. “For example, you have a couple of beers at night, you go to bed, you snore more and you wake yourself up, but it doesn’t happen all the time. Maybe that’s clinically relevant apnea and maybe it’s not.”

Sleep apnea is linked to obesity

“We do know that sleep apnea has been increasing in prevalence over the years,” said Dr. Rosen, noting that this may also have to do with the rise in recognition for sleep apnea too.

But this is “in part because it's very much linked to obesity and obesity is becoming more prevalent,” she said. “They get more airway collapse. They’re having poor sleep. Their insulin resistance goes up and that causes them to eat more of the wrong foods and gain more weight.

“And now you have a chicken and an egg, and some of those people go on to develop all the complications that go along with obesity and insulin resistance,” Dr. Rosen added, noting “there are occasionally people who have sleep apnea who lose a significant amount of weight and then they don’t have the condition anymore, but there are other factors besides obesity at play.”

“The fixation in the community is that you have sleep apnea therefore this explains why you feel so badly,” he said. “Many fixated on that, whereas really what you might have is psychophysiological insomnia where you lose your confidence in your ability to sleep well—you go to bed thinking that you can’t and that you won’t and therefore you don’t.”

“Yes, you have a little sleep apnea, but that’s really not what’s wrong with you or why you’re not feeling well,” Dr. Chediak said.

There are health complications

There are health complications

“We're worried about your heart and your brain health because we know that if we don't do a good job controlling the sleep apnea and the lack of oxygen, we see more heart attacks and more strokes,” said Dr. Chediak. “But most often the primary reason why patients come to see us is that they're either worried about their health because what others have told them or they themselves don't feel vital during the day.”

Additionally, “people just feel sleepy and that can have a neurocognitive effect—they can have trouble with their memory,” said Dr. Rosen, adding that “there may be some link now to poor sleep and dementia, which has to do with sleep deprivation and sleep apnea.”

“Another problem with obstructive sleep apnea is that it can be associated with difficult-to-treat hypertension,” she said. “Poor sleep can also be associated with insulin resistance. It doesn’t necessarily mean that you’ll develop diabetes, but it certainly becomes part of someone with obesity.

“The mainstay of treatment is PAP therapy, or positive airway pressure therapy, which I like to think of as an airway stent,” said Dr. Rosen. “You put a column of pressured air through the back of the nose that goes into the back of the throat and sits in the upper airway.”

“We typically run a set pressure continuously and this is called continuous positive airway pressure—or CPAP—therapy,” she said, noting that “when the airway wants to collapse it can’t because there’s a column of pressurized air stenting the airway open.

“For people who can't tolerate CPAP or PAP therapy—and particularly those who have mild to moderate apnea—a reasonable second choice is an oral appliance known as a mandibular advancement device,” said Dr. Rosen.

“The ones that are the most effective are custom made, and they are fit to the upper and lower part of the patient’s teeth and pulls the lower jaw forward when it’s in the mouth,” she added, noting that “the mandibular advancement is done by a dentist who creates the appliance and monitors how the temporomandibular joint and teeth are doing over time.”

Oral appliance therapy “helps stiffen the muscles in the back of the throat and in the upper airway so that it has less of a tendency to collapse,” Dr. Rosen said. “It works really well for snoring and in many cases of mild to moderate sleep apnea.”

“The key is to properly select the patients who are best suited for home versus laboratory testing,” said Dr. Chediak. “For moderate to severe sleep apnea, home sleep apnea testing is an effective tool and can be useful.

“Unfortunately, it's falsely negative about 15% of the time, but when it's positive, it's helpful,” he added, noting “that the distinction between lab and home testing is really based on how likely you are to have moderate to severe sleep apnea.”

“On the other hand, if you’re on the milder end of the spectrum—you’re thin, female, premenopausal and don’t have structural problems with your nose or throat—but you snore loudly and people tell you that you stop breathing, then home sleep apnea testing might be falsely negative,” said Dr. Chediak.

Get help if you don’t feel rested

Get help if you don’t feel rested

For patients who “feel that they are not rested after an entire night of sleep, it tells you that there’s either something you’re taking or you’re doing something that’s interrupting sleep,” said Dr. Chediak. “After seven to eight hours of sleep, you should feel rested, vital and ready to go.”

“The other thing is, if your bed partner is telling you that you stop breathing during sleep repeatedly and you have medical conditions that warrant special consideration, such as atrial fibrillation for example, then it’s important to know if you have sleep apnea,” he said. This is “because the treatment of sleep apnea decreases the recurrence rate of atrial fibrillation.”

“Most primary care physicians are starting to ask about sleep more or at least are open to hearing about it if patients bring it up,” said Dr. Rosen. “But yes, talk to your doctor, any doctor. It could even be your pulmonologist or cardiologist who care specifically about sleep apnea. Also, mental health professionals are very in tune to this as well as neurologists,” she added.

Learn more from the JAMA Internal Medicine patient page, “I am Worried That I Have Sleep Apnea—What Should I Know?”