As this weekend marks the 50th anniversary of the seminal 1964 U.S. Surgeon General’s Report on Smoking and Health, a new study in the Journal of the American Medical Association (JAMA) has found that public health efforts have cut smoking rates in half since then, saving 8 million lives.

“For the last five decades, the AMA has been a proud supporter of anti-tobacco efforts ranging from urging the federal government to support anti-tobacco legislation prohibiting smoking on public transportation to calling on tobacco companies to stop targeting children in their advertising campaigns,” AMA President Ardis Dee Hoven, MD, said in a statement. 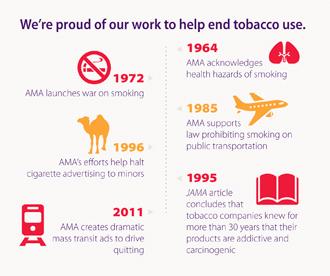 The AMA’s work to improve public health around smoking goes back to an official acknowledgement of the harms of smoking made the same year as the surgeon general’s first report, continuing with a “war on smoking” launched in 1972 and numerous other efforts across the decades. And in 1995, a JAMA report revealed deceptive practices by tobacco companies to hide the dangers of tobacco use.

In the last five years, efforts have included sponsoring mass transit ads encouraging commuters to quit smoking, advocating for an increase in federal excise tax on cigarettes and issuing a report on e-cigarettes that calls for analysis and regulation by the U.S. Food and Drug Administration (FDA).

Most recently, the AMA was among the signatories of a letter to President Barack Obama in honor of the smoking report’s 50th anniversary. The letter calls for federal actions that could “ultimately eliminate the death and disease caused by tobacco,” including robust smoking prevention campaigns, enforcement of health plan requirements to cover tobacco cessation treatment and FDA authority to regulate manufacturing, marketing and sales of tobacco products.

Since 1964, adult smoking rates in the United States have gone from 42.4 percent down to 20.6 percent as of 2009, according to data from the U.S. Department of Health and Human Services and the Centers for Disease Control and Prevention.

Tobacco use is a major risk factor for two of the nation’s most prevalent and troubling conditions - type 2 diabetes and heart disease.

The AMA continues its efforts to improve the health of the nation by focusing on those conditions. With prediabetes and high blood pressure both affecting about one-third of the U.S. population, now is the time to work toward preventing the onset of diabetes and heart disease and improving outcomes for those who already suffer from these conditions.

Through its Improving Health Outcomes initiative, the AMA is forging novel partnerships to make connections among organizations, communities and physicians to address these major public health problems in a comprehensive way.

Just last month, the AMA made its first announcement of a pilot program with the YMCA of the USA to prevent diabetes among Medicare-eligible adults in Wilmington, Del. Fifty primary care physicians and 28 residents are participating.

Two additional diabetes prevention pilot sites and two pilot sites for preventing heart disease will be announced this year. The programs aim to give physicians proven tools for enhancing prevention efforts in their offices and connecting patients with community resources that will help them reach their health goals.

Visit the Improving Health Outcomes initiative Web page to learn more about how the AMA is working to improve the health of the nation.

Why VA’s move to nationalize standards of practice is misguided

With loan repayment set to resume, 3 key questions for residents