Due to the Affordable Care Act (ACA), when physicians order certain evidence-based preventive services for patients, the insurance company may cover the cost of the service, with the patient having no cost-sharing responsibility (zero-dollar).

As coverage is directly aligned with these evidence-based recommendations, it is important to recognize which patient populations are eligible for each preventive service without cost-sharing and which patients may require cost-sharing for the same services.

The AMA offers coding guides that helps physicians ensure that they are coding services correctly to be eligible for zero-dollar coverage.

How physicians and other health care providers help patients benefit

It is critical that physicians and other health care providers clearly communicate to payers through careful documentation and coding for health care items and services. Otherwise, insurance plans may not know that they are solely responsible for paying the patient’s bill, thus burdening the patient with a surprise bill for a fully covered preventive service.

Confusion and inconsistency persist among payers, physicians, and other health care providers in coding and paying claims for preventive services. The AMA developed coding guides to clarify the coding for patients covered by Medicare and commercial payers: 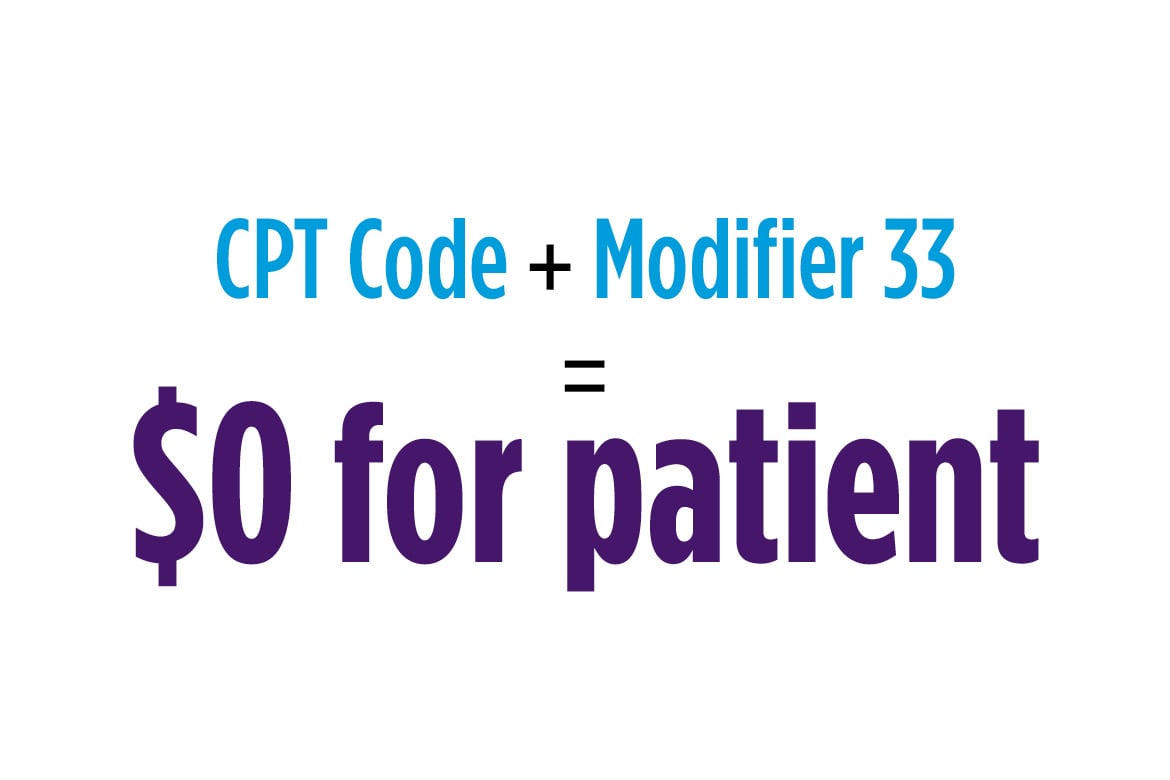 Modifier 33 should be used when the primary purpose of the service is the delivery of an evidence-based service in accordance with the guidelines provided by one of the ACA-designated organizations, including an A or B recommendation from the USPSTF.

If physicians and other health care providers do not specify modifier 33, the insurance plan may think that the preventive service was for a patient who is not eligible for the zero-dollar benefit, and the patient may be billed. To be eligible for the zero-dollar benefit, patients must fall within the evidence-based recommendations provided by the by four ACA designated organizations.

For example, the preventive recommendations of the USPSTF are for patients who are non-symptomatic. Specific examples include:

Medicare was slow to adopt the CPT modifier 33 following its original publication in 2010. However, over time the modifier has received further guidance from Medicare Administrative Contractors (MACs). For instance, in 2015, Medicare announced that modifier 33 may be used when anesthesia is furnished in conjunction with a screening colonoscopy. In addition, in 2016, Medicare mandated the use of modifier 33 with Advance Care Planning services when provided on the same day as Annual Wellness Visits, so that any coinsurance and deductibles are waived.

Several preventive services covered by Medicare do not have a USPSTF recommendation grade of A or B. These include:

In these scenarios, modifier 33 is not applicable.

The Medicare program has established modifier PT, which denotes when a service began as a colorectal cancer screening test and then was moved to a diagnostic test due to findings during the screening. In this instance, the modifier PT is appended to the diagnostic procedure code that is reported instead of the screening colonoscopy or screening sigmoidoscopy HCPCS code.

In general, practices should consult local MACs to determine the appropriate rules for reporting preventive services within the Medicare program and visit the Medicare Preventive Services website for more details.

AMA talks to health experts about the importance of preventive care and how physicians help their patients access certain preventive services at no cost to the patient.

Information provided by the AMA does not constitute clinical advice, does not dictate payer reimbursement policy, and does not substitute for the professional judgment of the practitioner performing a procedure, who remains responsible for correct coding.

Preventive care: As pandemic stretches on, “no more time to wait”
How the ACA lowers patients' out-of-pocket costs
COVID-19 job loss could leave 27 million uninsured—what to do now
Featured Stories

How physicians can better care for Native American patients

We must be able to trust the FDA vaccine approval process

Marijuana policy should be guided by evidence, not the ballot

The AMA’s work on streamlining documentation and reducing note bloat is far from over. Subscribe now to stay in the loop on continued CPT reform.