The news came through when Aaron Newcomb, DO, was on vacation. A few patients called the office to say that the local pharmacy refused to fill their prescriptions for pain, anxiety and opioid-use disorder (OUD). One was a long-term female patient covered by Medicare who Dr. Newcomb had been treating for a few years for chronic pain and anxiety.

She was stable, the medications hadn’t changed, but the large national chain “all of a sudden” told her that her physician had been blacklisted and refused to fill her medicine. Later that day, Dr. Newcomb received a letter from the chain stating it would not fill any of his controlled-substance prescriptions.

Dr. Newcomb cares for thousands of patients at a small federally qualified health center in downstate Illinois. As a board-certified physician in family medicine and addiction medicine, he is one of only a few doctors in his area who treats patients with chronic pain and substance-use disorders. His practice is set up not far from where he did his residency at Southern Illinois University.

“When the CDC [Centers for Disease Control and Prevention] guidelines came down in 2016 basically saying we needed to take as many people as we could off opioids, I knew that my patients were in for a world of trouble,” said Dr. Newcomb. “I was particularly concerned about my patients who were stable on low-dose opioid therapy for years. And my concerns have translated into an even worse reality for both me and my patients. Getting blacklisted by a national chain who had no clue about my practice was professionally wrong, but it also hurt my patients and my community.”

The fix wasn’t as easy as just asking his patients to find another pharmacy, however, given that the community is small and other pharmacists didn’t want to “take a chance” of Drug Enforcement Administration investigation, said Cassie Korando, the practice’s general counsel. 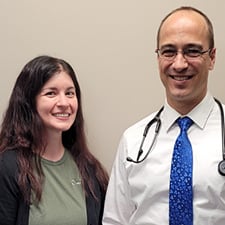 Cassie Korando and Aaron Newcomb, DO, waged six-month fight over a pharmacy’s refusal to fill his prescriptions.

Korando and Dr. Newcomb, however, took action by providing data from the practice regarding how prescribing practices were consistent with guidelines using specific patient profiles for illustration, as well as other information explaining the treatment of chronic pain with the use of opioids and buprenorphine for the treatment of OUD. A major topic included was how the 2016 CDC guidelines had been misinterpreted.

“When they got back to us, they basically questioned a specific formulation of buprenorphine I was prescribing for stable patients with cost or tolerability problems that isn’t a preferred type unless there is a clinical reason,” Dr. Newcomb explained. “They were also concerned about opioid therapy in general as well as the dose of buprenorphine used to effectively treat patients, and their algorithm out of context painted a misrepresentative picture of my controlled-substance prescribing habits.

“It took us a really long time to explain why an unknown algorithm misses the whole picture of what is going on with individual patients,” he added.

Dr. Newcomb also explained that the detailed clinical nuances of treating patients with chronic pain or OUD didn’t seem to be looked at very carefully by the corporate pharmacy. After months of correspondence, and finally identifying a physician to help schedule a virtual meeting, the situation changed.

Require access to Rx for opioid-use disorder in prisons, jails

“It was a virtual meeting, but it enabled us to get into very complicated medical questions about treatment of patients with buprenorphine for OUD,” he said. “Topics included the standards of the drug testing in my program, the pharmacologic interventions for concomitant medical problems like attention-deficient disorder, treating patients that are continuing to use drugs, access to treatment without mandated behavioral health interventions, and why some patients on buprenorphine required different dosages than others.

“I have been at or near my 275-patient limit since 2018 and I tailor every treatment regimen to each individual’s needs based on my clinical experience, addiction medicine training, and of course medical evidence and science,” he added. “It was clear in the discussion that there was not a good understanding of the basic principles of treating patients with buprenorphine for OUD. Oddly, the topic of opiates for chronic pain was never brought up during this virtual meeting.”

A little more than a week later, Dr. Newcomb received an email that the corporate chain would fill his controlled-substance prescriptions again. It was a six-month ordeal during which time many others joined the fight including the Illinois Academy of Family Physicians, Illinois State Medical Society and the AMA.

The AMA has been fighting this battle in other states, too.

“The AMA strongly urged the CDC to not include specific numbers in its 2016 Guidelines because we were concerned that state legislatures and corporate entities would use those numbers as indiscriminate hard thresholds—causing harm to patients who were stable on high dose opioid therapy, suffered major trauma, or who had cancer or were in hospice or received palliative care,” AMA Executive Vice President and CEO James L. Madara, MD, wrote in a letter to the leader of the Georgia House of Representatives in support of a bill addressing this issue.

“Unfortunately, we were correct in our prediction that corporate pharmacy chains and others would adopt a version of the 2016 Guidelines,” Dr. Madara’s letter adds. “These versions of CDC guidelines have been widely misapplied. In many cases, pharmacists have refused to fill a legitimate opioid prescription for a patient in chronic pain, or for patients with cancer or in need of palliative care. These actions have resulted in patients being told that they were not really in pain and sometimes patients have been subject to humiliating accusations that they were drug seekers. While this has not necessarily been the norm, it has occurred in Georgia and across the United States because of corporate pharmacy policies that inappropriately interfere in the patient-physician relationship.”

“This was very personal to me,” Dr. Newcomb said. “This is the center of my life as a doctor, my passion and what I do is pour my heart and soul into helping patients with chronic pain, opioid-use disorder, and any other chronic condition. To have a corporate pharmacy interfere questioned what I hold dear and made me angry, and I’m glad I didn’t back down because my patients count on me.”

The AMA believes that science, evidence and compassion must continue to guide patient care and policy change as the nation’s opioid epidemic evolves into a more dangerous and complicated illicit drug overdose epidemic. Learn more at the AMA’s End the Epidemic website.

The End the Epidemic website was recognized by the Academy of Interactive and Visual Arts. As part of that organization’s 27th Annual Communicator Awards, End the Epidemic was honored with an Award of Excellence in the Cause & Awareness website category.