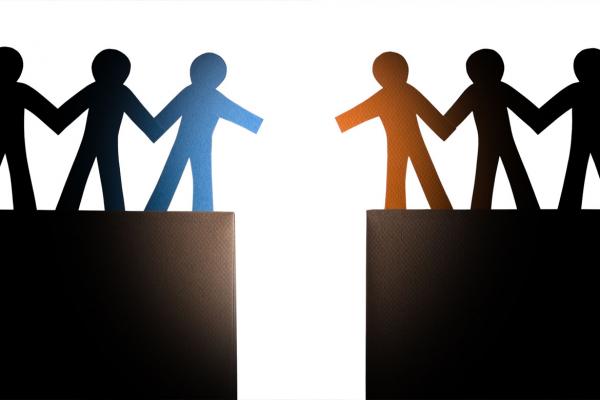 Advancing Health Equity: A Guide to Language, Narrative and Concepts provides a glossary of key terms. This glossary is by no means exhaustive, nor is it a definitive list of correct/incorrect answers. Rather, it is intended to serve as a starting point for reflection. It is a guide on current usage of important terms and will be updated over time. Whenever possible, we cite authoritative sources and introduce ongoing debates over definitions.

The glossary consists of more than 140 key terms. Here are some examples:

Discrimination of people with disabilities based on the belief that typical abilities are superior. Like racism and sexism, ableism classifies entire groups of people as “less than,” and structures opportunity to advantage some and disadvantage others.

Uplifting, trusting, and valuing the lived experiences of the people most impacted by the issue(s) and inequity(ies) you want to address; the process of centering the voices of those who have been historically marginalized.

Developed in the 1980s in response to Maori discontent with medical care in New Zealand. Cultural safety goes beyond the basic notion of cultural sensitivity that characterizes cultural competence to focus on analyzing power imbalances, institutional discrimination, and colonial relationships as they manifest in health care. Cultural safety calls on medical professionals and health care institutions to create spaces for patients to receive care that is responsive to their social, political, linguistic, economic and spiritual realities. Culturally unsafe practices, in contrast, are actions that diminish, demean, or disempower the cultural identity and well-being of patients.25,26

Collective and complex trauma inflicted on a group who share a specific identity or affiliation.95 It reflects past treatment of certain racial and ethnic groups, especially Native Peoples, including their consignment to reservations with limited resources, and the cumulative harm caused by traumatic experiences and policies. This is another form of structural (i.e., systemic) racism that continues to shape the opportunities, risks and health outcomes of these populations today.54,96,97 While thinking tends to focus on past treatment, there are modern occurrences that are experienced as collective traumas. The compounding of the old and new traumatic experiences impacts health status and social position today and in the future.

Social system where social advancement is based on one’s capabilities and merits rather than family, wealth, or social background and connections. It is also associated with the commonly heard phrase of “pulling yourself up by your bootstraps.”

Term to define the status of a population by what they are not and the lack of some characteristic held by those in the dominant category. Defining people of color as “minorities” is not recommended because of changing demographics and the ways in which it reinforces ideas of inferiority and marginalization of a group of people.70

The imposition, over time, of racial differences onto a population. This process or set of processes may or may not be animated by conscious forces, rather than a static event that constructs races as real and unequal that negatively affects social, economic and political life. It underscores the fluid and dynamic nature of race.117 Racialization can also be described as a form of judgmental racial classification characterizing a population group which is used, publicly, to justify stigmatization, exploitation and paternalism.118

Idea that racialized exploitation and capital accumulation are mutually reinforcing.119 The concept is attributed to Cedric Robinson, who argued that “the development, organization and expansion of capitalist society pursued essentially racial directions.”120 Read more about racial capitalism.

As defined by Camara Jones, “racism is a system of structuring opportunity and assigning value based on phenotype (“race”), that unfairly disadvantages some individuals and communities, unfairly advantages other individuals and communities, and undermines realization of the full potential of the whole society through the waste of human resources”121 Racism can operate at different levels: structural, institutional, interpersonal and internalized.

As defined by Zinzi Bailey et al, structural racism “refers to the totality of ways in which societies foster racial discrimination through mutually reinforcing systems of housing, education, employment, earnings, benefits, credit, media, health care, and criminal justice. These patterns and practices in turn reinforce discriminatory beliefs, values, and distribution of resources.”7 Structural racism results in systemic variation in opportunity according to race or ethnic background—including differentials in access to health care based on race.7,14,54 It is a deep-seated and core form of social injustice and oppression seen across society, perpetuating cumulative advantage for whites throughout life. Read more about structural racism.

Discriminatory treatment, unfair policies and practices, and inequitable opportunities and impacts within organizations and institutions, based on race. Individuals within institutions take on the power of the institution when they act in ways that advantage and disadvantage people, based on race.

The expression of racism between individuals. These are interactions occurring between individuals that often take place in the form of harassing, racial slurs or racial jokes. It may also take more subtle forms of unequal treatment, including micro-aggressions.

Acceptance by members of stigmatized races of negative messages about their own abilities and intrinsic worth.45

A belief in a genetic or biological basis for categorization that defines membership of a racial category. Underpinning the belief are notions of naturalness (e.g., “race” is a natural/objective category rather than a social construction), cross-cultural stability (e.g., racial categories hold the same meaning across the world), and inductive potential (e.g., knowledge of a person’s race can inform your actions and decisions pertaining to that person).122

Discrimination based on sex, typically the belief that cisgender males are inherently superior to all other genders.

According to Jonathan Metzl and Helena Hansen, “the trained ability to discern how a host of issues defined clinically as symptoms, attitudes, or diseases (e.g., depression, hypertension, obesity, smoking, medication “non-compliance,” trauma, psychosis) also represent the downstream implications of a number of upstream decisions about such matters as health care and food delivery systems, zoning laws, urban and rural infrastructures, medicalization, or even about the very definitions of illness and health. … [It] consists of training in five core competencies: (1) recognizing the structures that shape clinical interactions; (2) developing an extra-clinical language of structure; (3) rearticulating ‘cultural’ formulations in structural terms; (4) observing and imagining structural interventions; and (5) developing structural humility.”22

A term first developed by Johan Galtung to describe violence (harm) generated by a society’s system of stratification. According to Galtung: “If a person died from tuberculosis in the eighteenth century, it would be hard to conceive of this as violence since it might have been quite unavoidable, but if he dies from it today, despite all the medical resources in the world, then violence is present.”130 For Galtung, structural violence is synonymous with social injustice. The term has been popularized in health equity work by Paul Famer et al., who define structural violence as “social arrangements that put individuals and populations in harm’s way. The arrangements are structural because they are embedded in the political and economic organization of our social world; they are violent because they cause injury to people.”131 The concept’s power lies in its focus on the deep structural roots of health inequities; in contrast to the more passive term “social determinants of health,” structural violence explicitly identifies social, economic and political systems as the causes of the causes of poor health.132

Term developed by Philippe Bourgois, Seth Holmes, and others to describe an individual’s or a group’s condition of being at risk for poor health outcomes through their interface with socioeconomic, political, and cultural/normative hierarchies.133,134 Patients are structurally vulnerable when their location in their society’s multiple overlapping and mutually reinforcing power hierarchies and institutional and policy-level statuses constrain their ability to access health care and make healthy choices.41

A hypothesis first proposed by Arlene Geronimus positing that Blacks experience early health deterioration as a consequence of the cumulative impact of repeated experience with social or economic adversity and political marginalization.137 The hypothesis has been explored with other groups, including American Indian and Alaska Native elders, documenting the structural roots of weathering.138

It is important to differentiate “white” (a category of racial classification with no scientific basis) and “whiteness” (reflecting the power and privileges that people who are defined as white receive).142 Whiteness, in this way, is both cultural and socioeconomic power and privilege.143 Whiteness, according to sociologist Ruth Frankenberg, is “dominant cultural space with enormous political significance, with the purpose to keep others on the margin. ... white people are not required to explain to others how ‘white’ culture works, because ‘white’ culture is the dominant culture that sets the norms. Everybody else is then compared to that norm.”144 It is a complex and debated term, full of paradox, as exemplified in Jonathan Metzl’s Dying of Whiteness.145

Citation numbers align with the resources found in the complete Advancing Health Equity: A Guide to Language, Narrative and Concepts (PDF).

137 Geronimus AT. The weathering hypothesis and the health of African-American women and infants: evidence and speculations. Ethn Dis. 1992;2(3):207-221.

After Step 1 scoring change, what residency programs look for now

Sign up to be among the first to find out about the latest AMA initiatives to advance health equity in patient care and the profession.

Join the AMA
Also of Interest: