If you're preparing for the United States Medical Licensing Examination® (USMLE®) Step 1 exam, you might want to know which questions are most often missed by test-prep takers. Check out this example from Kaplan Medical, and read an expert explanation of the answer. Also check out all posts in this series.

The AMA selected Kaplan as a preferred provider to support you in reaching your goal of passing the USMLE® or COMLEX-USA®. AMA members can save 30% on access to additional study resources, such as Kaplan's Qbank and High-yield courses. Learn more.

A 71-year-old man who is a working attorney is brought to the emergency department 20 minutes after a car crash. Physical examination shows several lacerations to the face and extremities and contusions to the thorax. X-rays of the spine and chest are normal. Noncontrast head CT shows some evidence of minor age-appropriate brain atrophy, but no evidence of bleeding is seen.

After admission for overnight observation, he is discharged from the hospital. Three weeks later, he is brought to the emergency department by his wife because of confusion. He is not oriented to time or place, and can recall only one out of six objects after three minutes.

Which of the following is the most likely underlying condition?

This is a classic history and presentation of a chronic or subacute subdural hematoma, in which symptoms can present several days or up to three weeks following a traumatic head injury.

The patient will often have had an initial hospital admission with a negative workup and no evidence of abnormalities on serial CT scans of the head. However, either gradually or abruptly, the patient can experience decreasing mental status, sleepiness, focal neurologic deficits, seizures, etc. from subdural accumulation of blood and subsequent compression of the brain.

The bleeding originates from the bridging veins of the meninges, and since the bleed is under venous pressure (unlike the arterial pressure of an epidural hematoma), more time may pass for blood to accumulate before symptoms arise. Atrophy of the brain allows for more space and movement in this area. Thus, trauma with coup-contrecoup effect can cause trauma and shearing of the bridging vessels. Abnormal hemostasis (e.g., thrombocytopenia, platelet dysfunction, anticoagulant overdose) can also cause a subdural hemorrhage.

A CT or MRI of the brain will show a semicircular, crescent-shaped opacity (blood) just below the cranium, impinging on the brain tissue (see figure). The crescent shape reflects blood crossing the cranial suture lines (contrary to an epidural hematoma, which does not cross suture lines). 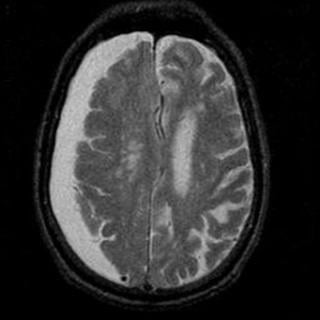 On the other hand, acute subdural hematomas can present within a few hours of an especially violent injury due to widespread damage to the bridging veins. These cases are particularly devastating, with a coma present in up to 50% patients after injury. These are much more difficult to clinically distinguish from an epidural hematoma, although if symptoms are present, head CT will typically reveal a massive crescentic hematoma.

Choice A: Alzheimer disease usually develops more gradually, typically over several years (although some cases can develop over a few months). In Alzheimer disease, cognitive deficits affecting memory, language, and executive functioning are early and profound, with motor and continence issues presenting later in the disease process. MRI findings in this condition are relatively nonspecific with generalized cortical atrophy (particularly of the hippocampus).

Choice B: Brain metastases could very well present as described here; however, the patient will often have constitutional symptoms of cancer such as fatigue and weight loss. With metastatic disease, head CT may or may not reveal a mass, although a mass large enough to produce signs of compression would likely show up on imaging. In this patient with a history of recent trauma, a subdural hematoma is far more likely.

Choice C: An epidural hematoma is unlikely in this patient, given that his symptoms evolved over a period of weeks rather than hours. Patients with epidural hematomas typically present with symptoms much earlier (few hours) because the bleed originates from the middle meningeal artery, which is adjacent to the anterolateral (temporal) cranium and is often injured with a skull fracture in this location. The high arterial pressure combined with limited outflow space results in rapid compression of the brain and symptom production.

The classic presentation for epidural hematoma is a blow to the head causing an immediate loss of consciousness (from the initial impact) with recovery and a transient "lucid period," followed by declining consciousness. If untreated, eventually coma and/or death (from brainstem compression). A CT or MRI will show a lens-shaped opacity within the cranium, compressing the brain tissue. The space in which blood can accumulate is limited by lateral sutures, where the dura inserts, giving them a lens-shaped (biconvex) appearance. This is in contrast to the crescent-shaped opacity of a subdural hematoma because epidural bleeds do not cross suture lines. 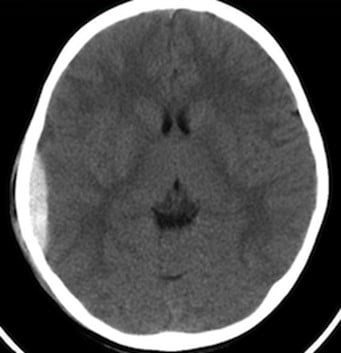 Choice D: Normal pressure hydrocephalus occurs in the elderly and is associated with the triad of urinary incontinence, new onset of confusion, and gait disturbances ("wet, wacky and wobbly"). Typically, the gait disturbances occur earlier in the course of the disease compared to Alzheimer. Unlike the scan in this patient, the CT will show dilated ventricles, but CSF studies will usually reveal normal pressure (hence the name). Classically, patients will have a history of meningitis, subarachnoid hemorrhage, or another cause of damage to the arachnoid granulations, thus impairing CSF reabsorption.