Can skipping social events with peers increase your chances for burnout? A recent study provides key findings on how loneliness and connectivity impact residents’ emotional well-being. 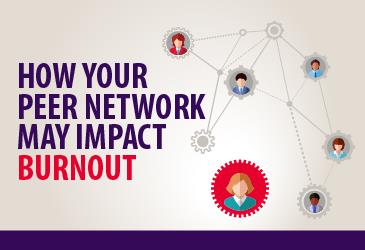 Authors of the study “hypothesized that residents with greater loneliness would have greater burnout, and that residents who are more central within their social network have less burnout.”

They tested their hypothesis on internal medicine residents using a survey containing the Maslach Burnout Inventory (MBI), a three-question loneliness scale and a social connectivity component.

Study authors found that their hypothesis proved true: Residents reporting significant burnout also had higher loneliness scores based on responses to three questions on a three-point Likert scale, with responses “hardly ever” (representing one point), “some of the time” (two points) and “often” (three points). Questions on the loneliness scale measured residents’ “lack of perceived connection to others.” The questions were:

Why personal accomplishment may lead to a more active peer network

To explore how residency programs may function as “social networks,” authors of the study also “had residents rate their connectivity to all other residents and used [the] data to generate two categories of social network outcomes: Degree (number of connections) and centrality (location and/or role within the network),” according to the study.

The study found that residents who had higher scores for personal accomplishment on the MBI survey also had greater “centrality within the residency” program and were more connected to their social network.

“Our study is the first to demonstrate a relationship between loneliness and burnout,” study authors wrote. “Those with greater burnout—meeting burnout criteria by both emotional and depersonalization—had higher loneliness scores. There was no significant relationship between social network measures of degree or centrality and emotional exhaustion and/or depersonalization scores. However, high personal accomplishment scores were associated with several social network measures.”

Although the study was limited to a single residency program, the authors noted that these findings provide a “starting point for future research to assess the effect of group and social networks on trainee burnout.”