Love can impact more than your relationship status. If you’re applying for residency positions with your partner, it can determine where you sleep, live and work for some of the most crucial years of your medical career. But what’s it like to experience the Match with your mate?

That answer varies based on the couples’ competitiveness as applicants, their chosen specialties and the compromises they’re willing to make, said Calvin M. Kagan, a fourth-year medical student at the University of Vermont College of Medicine.

He and his girlfriend, Amanda, met in college and attended the same medical school, but he began his undergraduate medical education studies a year before her. When he realized they wouldn’t graduate at the same time, he decided to follow his passion for policy and pursued a Master of Public Health at Harvard University so they could apply to the National Resident Matching Program (NRMP), commonly known as the Match, together. 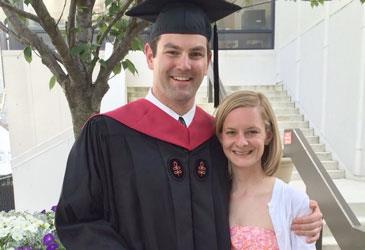 “Deciding to participate in the Match as a couple can be a very stressful decision for some couples. Fortunately, we were not in this category,” he said. “We both knew that we would pursue the Couples Match for the majority of medical school.”

In 2014, 1,850 applicants participated in the Match as 925 couples, slightly lower than the all-time high of 1,870 applicants in 2013. Despite the competitiveness of the Match, couples typically enjoy success, with match rates higher than 90 percent every year since 1984 when the NRMP began allowing individuals to match as a couple. In 2014, the match rate for couples was 94.2 percent, according to the NRMP.

But that doesn’t mean the process is less stressful for couples.

“One of the biggest stressors is just the lack of knowledge about the Couples Match,” Kagan said. “Most people don’t really know what the process involves until they’re in it, and advisors can be helpful but they don’t always have as much experience with couples as single applicants.”

In its early stages, students applying for the Couples Match follow a similar application process as their colleagues. Partners must first register to match individually on their Electronic Residency Application Service application, and then specify on their rank order list that they want to participate in the Match as a couple.

The real stress kicks in once couples begin traveling for program interviews and both partners have to coordinate their rank order lists of preferred programs. The NRMP links both match lists and will only match couples to the most preferred pair of programs on their rank order lists where each partner has been offered a position. This means that mates have to submit the same number of ranked programs, agree on how they’d like to pair and rank their preferred programs, and then hope each of their paired respective programs accepts them.

Partners can apply for different specialties, programs, or institutions, but to successfully match as a couple, both applicants must be admitted to the same set of programs they paired on their rank order lists. If they do not obtain a match as a couple, the NRMP will not process their lists separately to find a possible match for each individual. However, there is one caveat to this rule:  Applicants can choose to go “unmatched” on their rank order lists, which indicates that they’re to not match to any program even if their mates are admitted to their preferred programs.

Kagan and his girlfriend applied for the same specialty but he said the pressure of the Couples Match was still palpable. “There is no doubt that matching as a couple is more challenging than applying alone, simply because a program must want both of you rather than just one,” Kagan said. “We had to apply to significantly more programs than our peers applying into the same field, and were advised to go on nearly twice as many interviews. And while I don't think we are any more stressed than our classmates, it is safe to say that we are less certain of where on our list we will match.”

Kagan said applying to programs with his girlfriend deepened their bond—and they’ve enjoyed some fun travels along the way. Since they both applied for internal medicine positions, they were invited to many of the same program interviews and had the chance to explore the country together while splitting the hefty costs of travel and lodging.

“Applying as a couple transformed the Match from a stressful ordeal into an incredibly fun and exciting year,” Kagan said. “Rather than face the challenges of the Match alone, I always had someone to edit my newest draft of my personal statement or to simply to talk with.”

Without careful planning, learning about options and being open to compromise, Kagan said he and his girlfriend wouldn’t have been as successful. He also said having the same specialty and medical school as his girlfriend made the interview process more manageable, so it was easier for them to create a rank order list of programs they agreed on.

Yet he fully acknowledges that they’ve been “very fortunate,” citing instances where the Couples Match tested the strength of his friends’ relationships, even to the brink of breakups. To avoid stress and improve their chances of matching in a preferred program, Kagan said he learned as much as he could about the Couples Match.

Thinking of pursuing residency programs with your loved one next year? Look for tips on how to navigate the process soon at AMA Wire®.