The Centers for Medicare & Medicaid Services' (CMS) proposed modifications to the meaningful use electronic health record (EHR) system program will make it easier for physicians to achieve success, the AMA this week told the agency in a comment letter. Here’s how the modified version stacks up to the original—and what it means for you.

CMS released its proposed changes to Stages 1 and 2 of the notoriously burdensome program April 15. The changes reflect recommendations the AMA has been making for years, such as adding flexibility and lessening penalties. 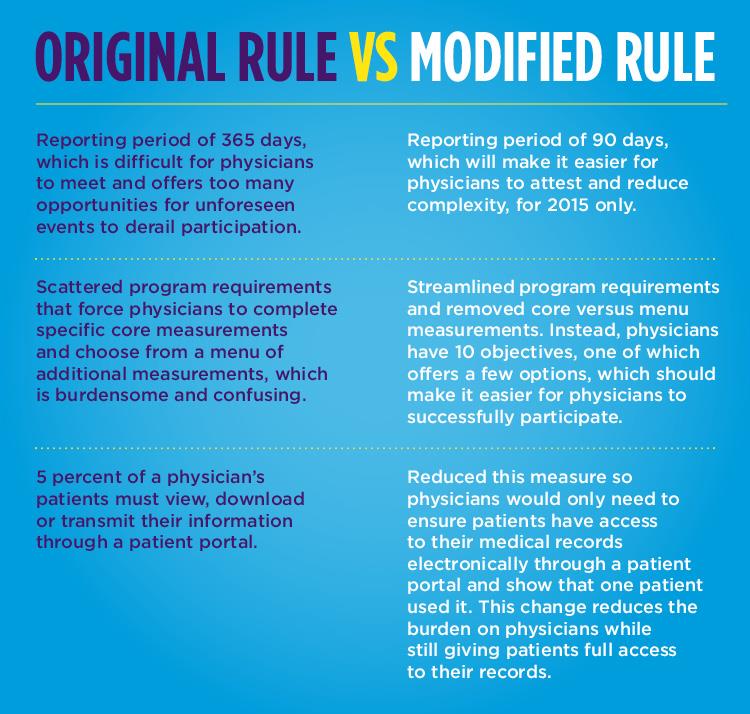 Look right for the key proposed changes you should know:

About 80 percent of physicians already have incorporated EHRs into their practices, according to the U.S. Department of Health and Human Services Office of the National Coordinator for Health IT. This proves physicians are on board with new technologies that can strengthen the physician-patient relationship and make them more efficient, said AMA President-elect Steven J. Stack, MD, in a statement.

“However, physicians have faced significant barriers in participating in the meaningful use program and many are receiving penalties despite their investments in those types of innovations,” Dr. Stack said. “We believe CMS’ proposal offers common sense solutions that, if finalized quickly, will help more physicians use EHRs in a truly meaningful way while supporting patient engagement.”

According to CMS data released in mid-December, about one-half of eligible professionals will face payment penalties next year because they could not fulfill meaningful use requirements. Only about 9 percent of physicians and other eligible providers had attested to Stage 2 of meaningful use in 2014, highlighting the difficulty of the program.

Changes good but should go farther

The AMA offered more recommendations for CMS to consider before it publishes its final rule on the matter late this summer, including:

The AMA urged CMS to publish a final rule “as quickly as possible to instill confidence in the program.” The deadline for groups to submit comments on the rule is June 15.

The AMA continues its aggressive push for solutions to the one-size-fits-all program, as outlined in a blueprint submitted to CMS in October.

In addition, the AMA is building on a new framework for EHR usability that it recently developed with an external advisory committee of practicing physicians and health IT experts, researchers and executives. More than 30 physician groups also joined the AMA in recommending three changes to improve the EHR certification process to make it easier for physicians to use EHRs and care for patients.