Earlier this year, Manvinder Kainth, MD, had a handful of N95 masks that she kept in paper bags labeled for each day of the week.

When her direct primary care practice in Plano, Texas, closed for two weeks at the beginning of the COVID-19 pandemic, she went on daily hunts for masks and other personal protection equipment (PPE), scouring what was available from medical, dental, hardware and artist supply vendors.

Get the news, videos and podcasts that matter to you, right in the palm of your hand.

“It was a scramble to find any vendor that had masks,” she said. “I didn’t care if it was five masks or 200, if I had the ability to buy them, I would.”

Doctors across the state had similar stories—especially those in rural areas or in small practices like Dr. Kainth, an independent solo practitioner with just one person on her staff.

“The large medical suppliers did not come to the aid of our small practice,” she said. “I don’t know where they sent their supplies, but they definitely did not send them to us.”

For now, however, the hunt is over. Thanks to a massive shipment of more than 23 million masks that had been purchased by the by the Texas Division of Emergency Management and the Governor’s Supply Chain Strike Force and whose distribution is led by the Texas Medical Association (TMA) and medical societies representing the state’s 254 counties.

Out of that gigantic shipment, a large box containing hundreds of masks found its way to Dr. Kainth’s office.

“It was a beautiful sight,” she said. “Now that I don’t have to actively search for these supplies, I’m able to give 100% of my professional time to treating patients.”

The ability to handle such a deluge and gaining the state’s trust in being able to handle the responsibility took months to establish, said Sara Regalado, TMA director of county medical society outreach.

Texas has a robust crisis response infrastructure built around 22 Regional Advisory Councils (RACs) that have been designated to distribute PPE from state and national stockpiles during hurricanes, tornadoes, fires, floods and other Texas-sized emergencies.

“But this is a different type of emergency,” Regalado said. “The TMA recognized early on that physicians would be left out of the distribution chain because RACs are set up to work with hospital systems and emergency service agencies and are not designed to work with community physicians.” 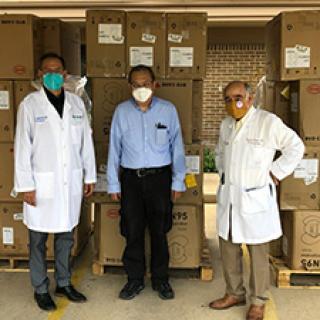 The TMA surveyed practices to get a needs assessment on how much PPE they used per week and also lobbied legislators, state and local health department officials and others to give community physicians access to the supplies they needed.

Eventually, the TMA-generated practice-needs assessments were aggregated to get individual county totals, which were then used by the RACs to allocate PPE directly to county medical societies that then distributed it to individual practices, said Grant McInnes, TMA’s associate vice president of software engineering.

“It was a huge learning curve for us,” McInnes said, adding that the state had “never worked on a project like this with an outside entity like the TMA before.”

Each county medical society and each RAC had their own way of operating and each local area had different levels of resources and their own set of “logistical challenges,” Regalado said.

“It took getting down in the weeds to find local solutions to make it work,” she explained. “We’ve since really earned the trust of the RACs and the state, which is part of the reason why the state went to the TMA when the surplus masks became available. They knew that we would be able to get them in the hands of the physicians.”

While the state government received the huge shipment of N95, KN95 and surgical masks, it had nowhere to put them. The TMA cleared out two levels of its parking garage to use as storage for 6 million masks that were mostly designated for rural practices.

Physicians pay for shipping costs but are getting the masks themselves for free.

The TMA has also developed a vendor list that features companies willing to sell PPE without low-order minimums. Previously, Regalado said some vendors established minimum orders of 10,000 masks or 200,000 gloves—quantities that were way above what many practices could afford or handle.

Other state medical societies are also stepping up to help their members get supplies.

Representatives from the Arkansas Medical Society, for example, drove around the state in April and May delivering PPE. You can retrace their steps on social media by searching for #PPERoadShow. The website arkansasready.com/ppe was created by the Arkansas Economic Recovery Task Force and includes a list of the state’s PPE vendors. This is similar to what the AMA has advocated for on a national level.

The AMA collaborated with Project N95, a not-for-profit organization, to reserve quality-certified PPE for AMA members to purchase with no minimum. Physicians interested in future opportunities to purchase AMA member-exclusive PPE during the COVID-19 pandemic can complete a form to be notified if more equipment becomes available.

The AMA met with the Biden Transition Team about PPE shortages and urged the incoming administration to have a multifaceted approach. AMA stressed the importance of developing a national coordinated strategy regarding PPE manufacturing, acquisition, and distribution. In addition, the AMA emphasized the need to provide transparency about supply chain issues to state and local officials as well as healthcare providers.

The AMA is also urging the Center for Medicare and Medicaid Services and private payers to immediately implement and pay for Current Procedural Terminology (CPT®) code 99072, which was approved by the CPT Editorial Panel in September. The code describes the extra supplies and clinical staff time required to perform safety protocols for the provision of evaluation, treatment or procedural services during a public health emergency in a setting where extra precautions are taken.

Stay up to date on the top federal, state and judicial issues affecting patients and physicians with a bi-weekly newsletter.