Public health officials in Marin County, California, used to send drug-overdose surveillance data to the state and wait for two years to get it back.

“We didn’t know when and where events were happening in our communities,” Matt Willis, MD, the county’s public health officer, said during a presentation at the Surveillance & Sharing of Overdose Data for Action Summit, hosted by the AMA in Chicago. 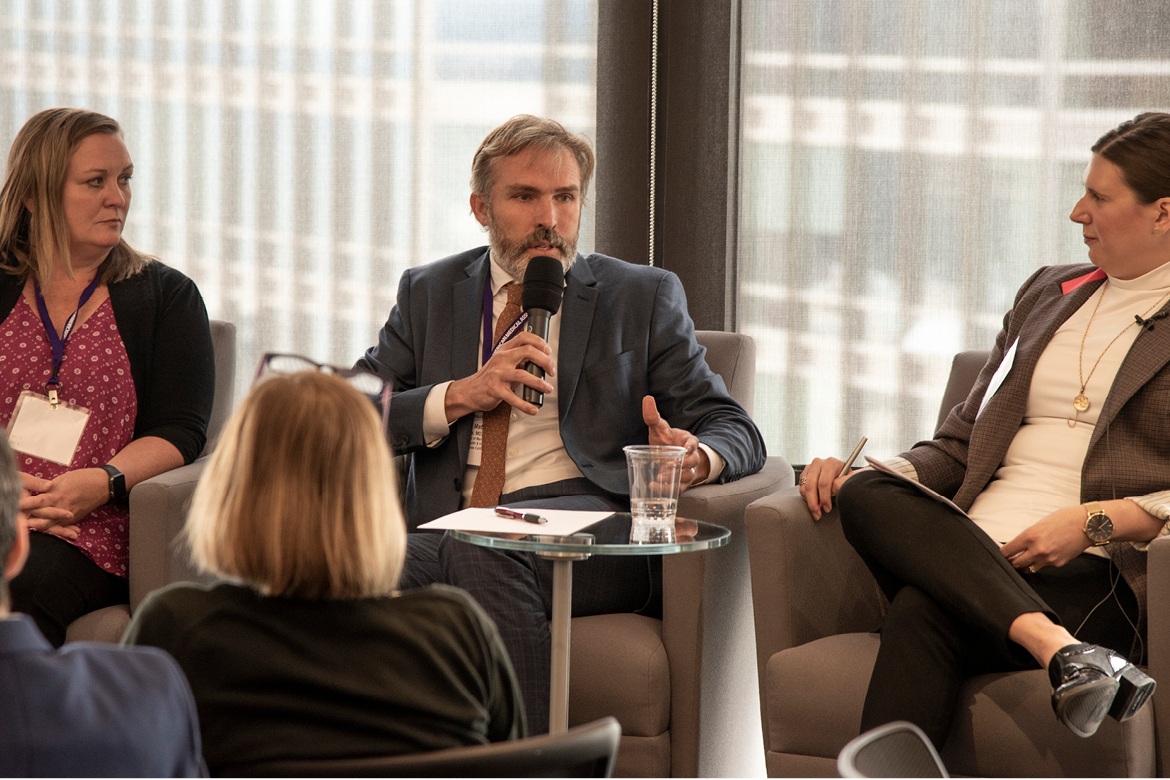 But, under a program called RxSafe Marin, data-sharing agreements were forged and systems were developed so that emergency medical technicians could easily record when naloxone was administered to reverse an opioid overdose. (Dr. Willis is pictured above in the center, speaking at the summit, along with Lindsey Myers, MPH, of the Colorado Department of Public Health and Environment, at left, and the AMA’s Amy Cadwallader, PhD, on right.)

The program effort led to weekly reports stratifying where overdoses occurred and alerts if there are three or more overdoses in a day. The data-sharing agreements and county policies allow for follow-up contact with every patient who overdoses to link them with behavioral health services and treatment. He also is working more closely with the coroner to get toxicology testing data distributed more quickly.

Federal agencies have been gleaning data from a multitude of sources and then aggregating that information into reports that educate the nation on the wide scope and deep reach of the overdose and opioid epidemics.

But the reports—with statistics detailing overdose mortality from 2016 and 2017—are of little use to a community’s first responders two years later. Nationally representative data related to nonfatal overdoses and naloxone administrations currently do not exist, the available data counting only deaths, fails to capture the all the dimensions of the problem and results in an incomplete picture of the ongoing and evolving overdose epidemic of opioids and increasingly, stimulant drugs.

What works and what doesn’t

The purpose of the summit held recently was “to identify and grow what works and let go of what doesn’t” in terms of collecting overdose-surveillance data in order to go from a response-driven approach to prevention, said the AMA’s Cadwallader, who directs science and drug policy for the AMA’s Science, Medicine and Public Health Unit.

Public health surveillance is conducted by tracking both “reportable” and “notifiable” occurrences. Health care providers, hospitals and laboratories are required to notify authorities of reportable conditions to identify cases with personal identifiers where immediate disease-control and prevention measures may be needed.

With notifiable conditions, reporting is voluntary and personal identifiers are excluded. Much of the data is collected using standardized surveillance case definitions—uniform criteria used to define a condition for public health surveillance. These enable consistent classification and counting across jurisdictions.

“When you’re in an epidemic, you need more timely data,” noted Jeff Engel, MD, executive director of the Council of State and Territorial Epidemiologists, who also spoke at the summit.

The latest data from the CDC’s National Center for Health Statistics showed that drug-overdose deaths fell 4.2% in 2018, with a “provisional” count of 67,744. That’s down from 68,557 in 2017. While these data may suggest positive signs in reduced drug overdose deaths, opioid-related mortality due to heroin and illicitly manufactured fentanyl and fentanyl analogues remain staggeringly high and simultaneously, overdose deaths due to cocaine and methamphetamine are increasing. The drug-OD death rate rose in 18 states.

That having been said, there are many key measures headed in the right direction, as featured in the AMA Opioid Task Force’s 2019 report on the progress made in ending the opioid epidemic.

Physicians can find educational offerings geared to their state or medical specialty at the AMA’s End the Epidemic website.

Rita K. Noonan, PhD, branch chief of the Unintentional Injury Prevention Division at the Centers for Disease Control and Prevention (CDC), also presented at the AMA summit. She oversees the CDC’s $350 million Overdose Prevention in the States initiative that combines prevention, intervention and surveillance to reduce opioid-related overdoses.

“Our North Star is the prevention of opioid harms and overdoses,” she said. To that end, her staff has borrowed strategies used to combat infectious disease and “took a page out of the HIV playbook” to link patients with local health services as they worked to capture their data.

These efforts include expanding access to medications for addiction treatment for inmates housed in Ohio’s Cuyahoga County Jail and initiating referrals to such medications for patients in Philadelphia emergency departments.

Similarly, surveillance and data-collection can flag those patients who have overdosed multiple times but ultimately refuse transportation to the hospital due to cost or various other reasons, Joseph S. Palm, chief of the Missouri Health and Senior Services Department’s Office of Minority Health.

In addition to being offered treatment, in Missouri patients at the emergency scene get resources on job placement, and help paying for food, housing and utilities offered by a collaborative of state agencies.

Experts at the AMA summit cited personal despair as an upstream contributor to opioid-use disorder. Such feelings often arise from long-term unemployment, broken relationships or deaths of loved ones, they noted.

In such cases, a holistic approach can help prevent overdoses, said Palm.

“People feel like you care if you help them stabilize,” he said. “Then, with things like daycare service, it makes it seem like going back to school is possible again.”

Up
11
More about:
Featured Stories

7 questions patients might ask about managing risk and wearing masks

To prevent SARS-CoV-2 spread in hospitals, look “offstage” too