Women and minority physicians continue to face prejudice in the workplace, which is a potential barrier to career advancement, fulfillment and leadership opportunities. Such stressors can also discourage women from continuing in academic medical practice. Yet no experimental studies isolate the direct effect that physician gender and race can have on patient satisfaction ratings. Do physicians who are not white or male get graded worse by patients?

That is the question that Basmah Safdar, MD, has set out to answer with the help of a Joan F. Giambalvo Fund for the Advancement of Women grant. In practice and through research and innovation, physicians are working to move medicine forward. AMA Members Move Medicine™, and Dr.  Safdar is one of them. A second physician, Kimberly Templeton, MD, was also awarded the grant for her research on issues faced by senior women physicians. Her work is highlighted in a separate article. 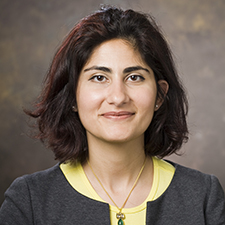 “For female physicians, if you ask many of them, probably three-fourths will say something about not being regarded as a physician at some point in their career,” said Dr. Safdar, an associate professor of emergency medicine and director of the Chest Pain Center. She is also the immediate past president of the Academy for Women in Academic Emergency Medicine.

“That prejudice exists and can get old after a while,” she added. “I’m 11 years into my practice and I still get the question, ‘Nurse, can you get my doctor?’ It has helped to have a few white hairs and an older face, but I continue to be called a nurse. It makes me wonder whether this bias, as opposed my competence, may sometimes influence my patients’ satisfaction scores.”

The AMA Women Physicians Section (AMA-WPS) hosts Women in Medicine Month each September to acknowledge pioneering women, celebrate their accomplishments and help cultivate future women physicians. The Joan F. Giambalvo Fund for the Advancement of Women Award is administered by the AMA Foundation on behalf of the AMA-WPS.

The AMA-WPS and the AMA Foundation awards scholarships of up to $10,000 to health care researches to identify and address issues that affect women physicians and medical students. The AMA-WPS and AMA Foundation have granted 23 research awards since 2006 on topics such as flexible work options and the promotion and retention of diversity in medical education.

Medicine’s “open secret”: What to do when patients hate

Research currently examines physician bias against patients, but patient bias against physicians remains poorly understood, according to Dr. Safdar’s overview. This bias is especially important in the emergency department because first impressions play such an important role in that relatively brief patient-physician relationship.

Dr. Safdar’s project was sparked by a conversation with Rachel Solnick, MD, a fellow female emergency physician. They realized they had so many anecdotes of patient bias, but lacked objective data to show how those patient attitudes may affect patient satisfaction scores.

“In the news we have recently seen lots of discussion about race of the physician being a factor in patient satisfaction,” said Dr. Safdar. “We are essentially trying to objectify the bias against physician gender and race with empirical data as the first step towards finding a solution.”

Dr. Safdar hypothesizes that female and black physicians will be rated with lower satisfaction scores.

“We wanted to see if this was indeed true,” she said, referring to her experiment with an interdisciplinary team from emergency medicine, psychology and biostatistics,

While women and men have reached parity in medical school for the past decade, women remain underrepresented in leadership roles.

“The reality is, there are an equal number of female physicians entering medical school now and yet there are not many that are retained,” Dr. Safdar said. “Among emergency medicine [physicians], 26 percent of females stay in academia or continue to practice. So why is there a disparity?”

Loss of retention has commonly been attributed to a “lack of mentors and role strain, less institutional support and lower salary for equal work,” according to Dr. Safdar’s overview. However, the less examined explanation is the patient bias against female and minority physicians, which can lead to a decline in psychological health and other symptoms of professional burnout.

“Some studies and fields have looked at the effect of stereotyping of physicians, both male and female, and its effect on burnout, but no one has really tried to understand that causal relationship,” she said.

Research has shown that women physicians are often evaluated less favorably than men, while other studies show females get better grades from patients. Black physicians also often report racist treatment from patients and minority medical students often meet the criteria for burnout as early as medical school. In a survey of family medicine residents it was found that 16 percent faced discrimination based on ethnicity.

“We often talk about typical stressors in the workforce that come from reasons such as work hours, work-life balance, salary and rank discrimination, parental leave policies etc. What are the additional factors that add to the stressors?” Dr. Safdar said. “I don’t think we have the tools yet to fully address these stressors. It will be exciting to look at prejudice towards physicians on a systematic basis at this scale. We are hoping that the results will equip us with the tools to start addressing such workplace prejudices.”

Up
32
More about:
I’m speaking! How resident communications differ by gender
How to get up to 3,000 more Black people in physician pipeline
Women physicians underrepresented in cable news COVID-19 coverage
Featured Stories