8 physician advocacy wins that set the stage for 2019 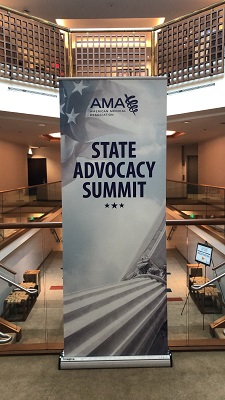 Given the turbulence in Washington, it’s easy to overlook the many policy wins scored on behalf of patients and physicians at the national and state levels. In her opening address to the AMA State Advocacy Summit, AMA President Barbara L. McAneny, MD, detailed how physician advocacy has made a difference on gun violence, regulatory relief, physician payment and more, while offering a look ahead to the Association’s ambitious 2019 policy goals.

“2018 was a year of great uncertainty in Washington, which is a polite way of saying nobody could predict what would happen from one day to the next,” Dr. McAneny told hundreds of physicians and others who gathered for the summit in Scottsdale, Arizona.

“The AMA and our state partners made significant progress over the last year ... on building industry consensus to reform prior authorization, on combating abusive insurer practices, and on promoting greater interoperability and usability for electronic health records,” she said.

The AMA secured more than 85 victories in advocating for patients and physicians in the areas of state regulation and legislation.

“Never forget that—as physicians—we are our patients’ best ally, and their best hope to change the system so it better supports them and their needs,” Dr. McAneny added.

5 ways the midterms shook up the U.S. health care agenda for 2019

Here are eight areas in which physicians scored key advocacy wins in 2018, and what the AMA’s targets are for this year.

Ending the opioid epidemic. One of the key wins in 2018 was to improve access to medication-assisted treatment (MAT) coverage for opioid-use disorder in Pennsylvania—where prior authorization will be eliminated for MAT. What’s ahead in 2019: Advocate more funding for multidisciplinary pain care and treatment for substance-use disorders, as well as increased enforcement of mental health and substance-use disorder parity laws.

Preventing gun violence. The big 2018 win was the successful advocacy for a federal ban on bump stocks and the AMA’s partnership with AFFIRM, a physician-led nonprofit dedicated to gun violence research. What’s ahead in 2019: The AMA will urge federal and state policymakers to fund research on gun violence prevention, and to strengthen background checks and other measures that can prevent deaths and injuries from firearms.

Enhancing access to care. The big wins in 2018 were to help secure funding for the Children’s Health Insurance Program for 10 years and expand Medicaid in four states. What’s ahead in 2019: Continue to promote Medicaid expansion and advocate for policies that stabilize the individual insurance market.

Limiting prior authorization. 2018’s key victory was to create a consensus statement to “right-size” prior authorization that was agreed to by multiple industry stakeholders. The AMA also launched a new grassroots advocacy website—FixPriorAuth.org. What’s ahead in 2019: Work to reduce both the overall volume of prior-authorization requirements and the number of physicians subjected to such requirements

Fighting abusive insurer practices. In 2018, the big win was to persuade Anthem to reverse its planned modifier 25 policy, which would have led to $100 million in physician payment reductions. The AMA also opposed efforts by Anthem to retroactively deny coverage of emergency department care. What’s ahead in 2019: Advocate directly with health insurers to stop policies that adversely affect patients and physicians.

Improving physician payment. The AMA scored a big 2018 win in leading a coalition to prevent the E/M code collapse, and also secured multiple changes to improve Medicare physician payment policies—for example, the Quality Payment Program (QPP). What’s ahead in 2019: Advocate with the Centers for Medicare & Medicaid Services and Congress for continued improvements to the QPP.

Pushing for regulatory relief. The big victory in 2018 came with Congress eliminating the requirement that the federal electronic health record program become more stringent over time. What’s ahead in 2019: The AMA will work to eliminate, streamline, align and simplify the many federal rules and regulations imposed on physicians.

Sessions at the AMA State Advocacy Summit cover critical topics such as the 2019 state health policy landscape, state regulations to protect patients, Medicaid policy priorities and how regulators can take a leading role in addressing the opioid epidemic.