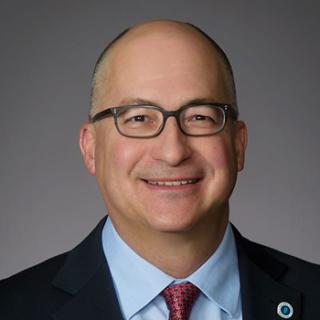 David H. Aizuss, MD, is a board-certified ophthalmologist living in Calabasas, Calif., where he runs Ophthalmology Associates of the Valley, a multispecialty ophthalmology group, and serves as an assistant clinical professor of ophthalmology at the UCLA Geffen School of Medicine, Stein Eye Institute..

Elected to the American Medical Association Board of Trustees in June 2020, Dr. Aizuss began his active advocacy in organized medicine early and has participated in the AMA his entire career, attending his first AMA annual meeting while in medical school at Northwestern University Medical School in Chicago. Later, in June 1979, he was elected to the AMA Medical Student Section Governing Council.

After graduating from medical school, he completed his internship at Evanston Hospital, part of the McGaw Medical Center of Northwestern University, followed by his residency in ophthalmology and fellowship in cornea and external diseases at the UCLA School of Medicine’s Stein Eye Institute. As a resident he was elected to the AMA Resident and Fellow Section Governing Council for three terms and, beginning in 1982, he also served as a member of the AMA House of Delegates as a member of the California delegation.

In 1988 Dr. Aizuss was appointed the alternate delegate representing the American Academy of Ophthalmology in the AMA House of Delegates before assuming the delegate position from 1993 to 1995 while he simultaneously served on the Service and Specialty Societies Caucus Governing Council. Dr. Aizuss became a delegate from the California Medical Association in 2010. Most recently, beginning with his election in 2017, Dr. Aizuss has been a member of the AMA Council on Legislation.

Active in a broad range of key leadership positions in his state and local specialty societies, Dr. Aizuss has served as president of the California Academy of Eye Physicians and Surgeons, the Los Angeles Society of Ophthalmology, and the Los Angeles County Medical Association. He was elected to the California Medical Association (CMA) Board of Trustees in 2010 before becoming board chair in 2014 and president of the CMA in 2018. When he concludes his term as immediate past president of the CMA in October 2021, he will have served on the CMA Executive Committee for 10 years.

Dr. Aizuss has previously served as chief of surgery at Encino Hospital, as vice chief of staff at Providence Cedars Sinai Tarzana Medical Center, and as chair of the board of the Specialty Surgery Center of Encino.

Dr. Aizuss is married to his wife, Felicia, for 31 years and has two daughters, Amanda and Julia.