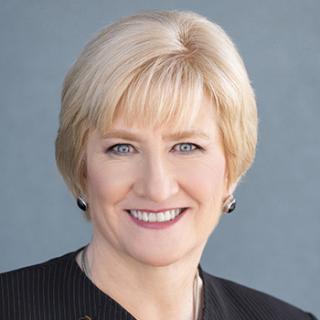 Barbara L. McAneny, MD, a board-certified medical oncologist/hematologist from Albuquerque, N.M., became the 173rd president of the American Medical Association in June 2018. She has been a member of the AMA Board of Trustees since June 2010, serving as its chair in 2015–2016.

Dr. McAneny is a fellow and former member of the board of directors of the American Society of Clinical Oncology (ASCO), a master of the American College of Physicians, and a past president of the New Mexico Medical Society (NMMS), the Greater Albuquerque Medical Association and the New Mexico chapter of the American College of Physicians. In addition, she serves as a member of the Community Oncology Alliance Board of Trustees and on the board of directors of the Cancer Center Business Summit. She became the delegate to the AMA from

Dr. McAneny is one of the founders and current chair of the board of the National Cancer Care Alliance, a group of independent practices collaborating to use innovation to deliver high-quality, high-value cancer care and to develop new alternative payment models based on sound data-driven principles. Prior to this, she was a founding member of Oncology Circle, a group of oncology practices using data to promote best practices.

Dr. McAneny’s interest in using data to improve practice sustainability began when she was appointed to the Centers for Medicare & Medicaid Service’s Practicing

Physicians Advisory Council, where she served from 2002 to 2006. In 2012 Dr. McAneny received a $19.8 million grant from the Centers for Medicare & Medicaid Innovation to demonstrate how oncology practices could use triage pathways to dramatically lower costs while improving outcomes. This award, named COME HOME (for Community Oncology Medical Home), later was incorporated into Medicare’s Oncology Care Model.

Innovative Oncology Business Solutions Inc., the company she created to manage the award, is now assisting physician practices in developing the process changes needed for MACRA.

Among other volunteer activities, she has served on the governor of New Mexico’s Task Force on Prenatal Care, the board of Planned Parenthood of New Mexico, and as chair of the joint task force of the NMMS and the New Mexico Bar Association on domestic violence. A recipient of a New Mexico Woman on the Move Award in 2005 and Woman of Influence Award in 2009, Dr. McAneny has been voted several times by her peers as Albuquerque The Magazine’s “Top Doc” in her specialty.