While research confirms the pervasiveness of burnout in residency, how do residents actually feel about their own well-being? A recent survey by the Accreditation Council on Graduate Medical Education (ACGME) asked 22,500 residents that same question, and the results, which were discussed for the first time last week during the 2015 AMA Annual Meeting, revealed an unusual trend. Read on for the results to see how you compare. 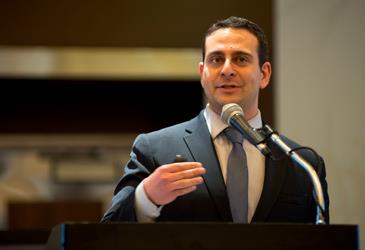 After completing an annual survey from the ACGME in May 2013, residents also were asked to complete a voluntary wellness survey. Of those who received the survey, 22,500—roughly 1 in 6 people—responded. Researchers compared data from resident responses to that of their peers in the general population using the 2006 and 2011 Behavior Risk Factor Surveillance System, a yearly survey of the general population conducted by the Centers for Disease Control and Prevention.

The ACGME plans to present the survey results at its 2015 wellness conference, which will summon roughly 120 people from medical and non-medical industries to discuss the current state of resident well-being and wellness solutions for residency programs to explore.

“At the ACGME level, we really consider ourselves conveners and facilitators on the issue of resident wellness,” Nick Yaghmour (pictured above), a research analyst for the ACGME’s department of education, said. “We want to bring people together to discuss this [issue]. In the most ideal situation, institutions and programs get together, respond through discussions and then begin creating wellness programs of their own.”

Despite results from a Canadian study demonstrating the poor mental and emotional health of residents in training, participants in the ACGME’s wellness survey actually reported a fairly positive state of well-being among residents compared to the general population. Of the residents surveyed, 41.6 percent described their general health as “very good,” only one point lower than the 42.7 percent of their non-resident peers who reported the same favorable perspective.

However, when assessing their health across individual lifestyle factors—such as sleep disturbances, low energy levels and depression— residents reported lower overall rates of well-being compared to the general population. For instance, responses about the number of days they “felt down, depressed or hopeless” during a two-week period were:

This discrepancy between residents’ positive perceptions of health versus the reality of their well-being aligns with previous findings from other investigators that demonstrated physicians’ difficulties in assessing their own wellness.

In a 2013 study  of 1,150 surgeons, 89 percent of respondents believed their well-being was at or above average, including 70.5 percent with scores in the bottom 30 percent relative to national norms. But after receiving objective, individualized feedback based on the Mayo Clinic Physician Well-Being Index score, 46.6 percent of these surgeons indicated that they intended to make specific life changes to improve their wellness.

Tell us: Do you think residents also struggle to properly evaluate their well-being? If so, how can programs help address this issue? Share your thoughts in the comments below or on the AMA-RFS Facebook page.

Why commute time should be a factor in your residency house hunt
Q&A: Battling cancer, a medical resident opts for COVID-19 vaccine
On and off the wards, residents face limited holiday celebration
Featured Stories

Learn how to comply with new information-blocking regulations

Which COVID-19 vaccine should I get? What to tell your patients

What we need to advance equity: reflection, partnership, accountability