A recent survey finds U.S. medical residents have numerous financial concerns, from repaying medical school debt to being properly insured against illness or injury, and fully one-quarter are already worried they might not have enough money to retire. A financial planner suggests five essential moves to make while you are still in residency.

The survey, which is the basis for the “2017 Report on U.S. Resident Physicians’ Financial Preparedness,” published by AMA Insurance, includes responses from more than 1,500 residents to questions about their top financial concerns, the status of their retirement savings and their personal financial knowledge. 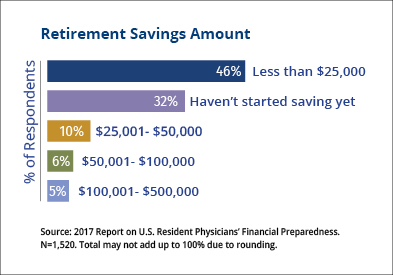 Not surprisingly, respondents’ top financial concern was medical school debt. Thirty-four percent said they were “very concerned” about paying off their student loans.

The remaining top five financial concerns were funding children’s college expenses, 21 percent; providing for elderly parents, 19 percent; and having the right disability insurance in the event of an injury, 19 percent.

“Financial stressors occur early and often during residency,” wrote Denise S. Friday, vice president of AMA Insurance, a subsidiary of the AMA. “From staggering debt loads to low salaries and long hours, residents face a complex personal financial situation now and into the near future. This is especially true of the nearly half of residents who are already married and a quarter who have already started their families.”

Despite their own perceptions of not being financially prepared, 73 percent of respondents said they were not using a professional financial advisor. More than one-third said this was due to lack of time. Nearly a quarter said the service was too costly, 15 percent said they hadn’t found a trustworthy professional, 14 percent would rather take the do-it-yourself approach and the remainder offered other reasons.

Taylor Wealth Solutions is a member of the AMA Insurance Physicians Financial Partners program, launched in 2011 to give doctors access to a nationwide network of independent, local and experienced professionals who have undergone a comprehensive due-diligence process by AMA Insurance.

Secure the most important kinds of insurance. These include disability, life and umbrella liability insurance. For example, employers might provide a good base amount of disability income insurance, but if you were to become disabled now with only that policy, you may be frozen at, say, 60 percent of a resident’s salary instead of a practicing physician’s salary.

Evaluate debt in context. Despite being a top concern, paying off medical school loans as quickly as possible should not necessarily be the top priority. Instead, Phillips suggests saving 15 percent of one’s income in an emergency fund, prioritizing paying down the debt with the highest interest rates, including mortgages, car loans and consumer debt.

Establish a realistic budget. Once you have insurance and an emergency fund in place, Phillips recommends striving to save 15 to 20 percent of your gross income for long-term wealth building. He also suggests limiting mortgage payments to 15 percent of your gross income, taking full advantage of employers’ 401(k) or 403(b) matched retirement contributions, and considering funding a Roth IRA, which is a post-tax retirement account that allows for more flexible access to funds before retirement.

Find a professional financial advisor. This can help you with budgeting, managing debt, securing the right kinds of insurance and establishing savings. You also will learn how to establish strong financial habits early on and come to understand what a realistic lifestyle will look like.

The AMA’s Career Planning Resource provides guidance on a variety of resident-life topics, such as understanding disability insurance and evaluating policies, building short-term savings and buying versus renting a home.

What doctors wish patients knew about COVID-19 vaccines and pregnancy

What physician borrowers should know about loan repayment in 2022