Editor’s note: The claims-made policy from the Philadelphia Academic Risk Group LLC, which was set to end Feb. 10, has been extended until March 12. The policy applies to physicians from Hahnemann and St. Christopher’s.

When it does end in February, affected residents will still need tail insurance to prevent a coverage gap. Visit the PAMED webpage on the Hahnemann University Hospital closure for more information.

A judge’s order in federal bankruptcy court is opening the door to the possibility of additional financial help to ensure long-tail medical liability insurance coverage for the hundreds of residents affected by this year’s record-breaking closure of Hahnemann University Hospital. The judge’s order followed an emergency motion filed on behalf of an Ad Hoc Committee of Hahnemann Residents and Fellows organized by the AMA.

Nearly all of Hahnemann’s residents and fellows have secured other training positions, but they have lacked access to the long-tail medical liability coverage to protect them in the event of claims arising from medical care provided during their time at Hahnemann. Also at risk are any former Hahnemann residents and fellows who were in training between Jan. 10, 2018, and Aug. 6, 2019.

A collaborative of medical organizations including the Philadelphia County Medical Society (PCMS), the Pennsylvania Medical Society (PAMED), Educational Commission for Foreign Medical Graduates (ECFMG), the Association of American Medical Colleges (AAMC) and the AMA have been pursuing various coverage options for the displaced residents and fellows.

Standing up for residents in court

The Ad Hoc Committee of Hahnemann Residents and Fellows is pursuing the matter in Chapter 11 proceedings in the U.S. Bankruptcy Court for the District of Delaware. Legal work in the case is being conducted by the firm of Potter Anderson & Corroon, and underwritten by the AMA.

“As we considered all the different parallel paths to achieve tail coverage for displaced resident and fellows, we felt it was essential that impacted residents and fellows have their own legal counsel in this pending bankruptcy matter, ensuring that their interests are represented in the court,” said AMA General Counsel Brian Vandenberg. He addressed the matter during a Dec. 18 webinar hosted by PAMED.

In response to legal pleadings filed on behalf of the affected residents and fellows, bankruptcy judge Kevin Gross has directed the debtors to explain why their cases should not be converted to cases under Chapter 7. That would mean a Chapter 7 trustee taking over the affairs of Hahnemann based on their failure to maintain adequate insurance.

“The debtors appear to have failed to maintain appropriate insurance for physicians they employed,” Gross wrote in his order.

Hahnemann’s help likely to be limited

Jeremy Ryan, the Potter Anderson attorney handling the case for the affected residents and fellows, said during the PAMED webinar that “Hahnemann does not have the assets” to buy tail coverage before Jan. 10. “While that’s the relief being sought, it appears that Hahnemann “doesn’t have the money” to comply.

However, Hahnemann is expected contribute funds to help reimburse affected residents and fellows who have had to pay out of pocket to buy the needed long-tail coverage, he said.

“We’re looking at their assets, and what they are spending their money for, to get a sense of how much money they have to contribute to that fund,” Ryan said.

Hahnemann has agreed to provide a full roster of affected residents and fellows and necessary details that can be provided to relevant Pennsylvania authorities in an effort to pursue a leniency or amnesty program for residents who cannot obtain tail coverage by the Jan. 10 deadline, Ryan said.

Most importantly, Ryan reiterated that affected residents and fellows must proceed with steps to purchase tail coverage for themselves, unless they’ve received assurances of tail coverage from their new institutions.

Money that may be contributed by others toward the cost of insurance premiums will likely be in the form of future reimbursement, underscoring the need for residents and fellows to act. The AMA has arranged a personal loan program through Laurel Road to assist in funding professional liability insurance premiums, where needed.

In addition, PCMS, PAMED, ECFMG, AAMC, the AMA and the Accreditation Council on Graduate Medical Education are urging the training institutions that have accepted former Hahnemann residents to help purchase tail coverage for those affected.

The Pennsylvania Medical Society has provided extensive and regularly updated resources on the Hahnemann University Hospital closure for the affected residents and fellows. That includes primers on claims-made insurance for attending physicians, as well as for residents and fellows . 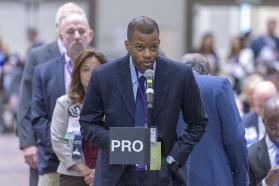 Highlights from the 2019 AMA Interim Meeting 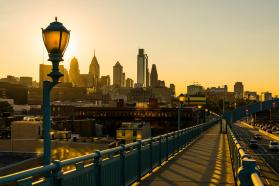