When the Bill and Melinda Gates Foundation asked maverick engineer Peter Janicki to clean up sewage wastelands in developing countries, he swore the problem was impossible to solve. Then something happened—he traveled abroad and discovered new ways to conceptualize sanitation, which led to a groundbreaking invention that turns tons of sewage into clean, drinkable water. Janicki recently discussed at TEDMED 2015 why the way we think is always the most important aspect of problem-solving.

Expanding the scope of the problem

Expanding the scope of the problem 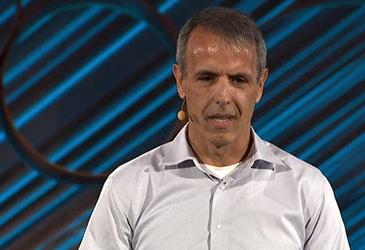 After accepting the sanitation assignment, Janicki travelled throughout Africa and India to learn about the scope of various countries’ sanitation problems and possible ways he could help. During that time, he encountered large tracts of land buried in trash and children swimming in streams contaminated by sewage that seemed to ebb into another tragic yet daily part of life in poverty.

Janicki soon understood the problem at hand: There was too much uncontained trash to prevent the sewage from polluting fresh water. And even if he could somehow clean up the sewage, it would be a costly and nearly impossible endeavor for underfunded countries to accomplish, Janicki said. Stunned by the miles of garbage and wastelands in each country, he was prepared to return to the United States without a real solution. But during one of his site visits, he became very sick.

Janicki accidentally had drunk a small drop of polluted water. “I began vomiting violently,” he said. He had to be hospitalized, which is where he learned that nearly one-half of the people in the hospital he visited were there because they had drunk polluted water as well.

“I thought, ‘How awful it must be for so many people to die like this,’” Janicki said. “My resolve to solve this problem became personal, and that’s when I realized that the problem was not too big. It was actually defined in a way that’s too small,” he said.

Janicki noted that the original problem that he was tasked to solve—keeping sewage out the water—was far too narrow for such a complex problem as sanitation in developing countries.

“I was looking through a straw. I could not figure out how to execute my vision,” Janicki said. “But then, I let the problem expand. All the constraints I was putting upon myself, I removed them. I let the problem get as big as it needed to get so that there wasn’t just a solution. There became multiple solutions that started to work—and that’s when it all came together.”

Janicki said he realized that in order to improve sanitation abroad he had to “make sewage valuable,” which would incentivize people to not dump trash into the environment. He said he realized he needed to adapt a multi-pronged approach to solving the problem, which was much bigger than processing sewage in a traditional way.

“In the United States we have a sanitation solution that works. We use flush toilets, pipe fresh water and septic systems that are connected to massively expensive waste treatment plants. None of this is profitable, and we don’t care,” Janicki said. “We simply tax our society, and force it to happen, which is no problem in a rich country. The mistake is that we repetitively force this solution in developing countries—and it almost never works.”

Janicki visited dozens of waste water treatment plants in developing countries and found that none of them were operating because they couldn’t afford the recurring electrical costs. He said he knew he had to approach the problem differently.

“If I was going to make sewage valuable, I had to dig down and see what was inside it. And what you find is that sewage is mostly [made of] water, and water is definitely valuable. [Once the water is separated from the sewage] what’s left by and large, is mostly biomass, which makes great fuel—and energy is also valuable,” Janicki said.

This discovery prompted him to create the Omniprocessor, a heavy-duty piece of equipment that’s roughly the size of two school buses. The equipment consumes sewage and produces “super-clean drinking water, electricity and ash that’s used in concrete,” Janicki said. Using a “sledgehammer approach,” the machine boils sewage to separate water from biomass, which in turn is burned to create energy to continue powering the Omniprocessor.

Janicki built the machine, tested it and proved its effectiveness in the United States. The Omniprocessor now is being piloted in West Africa, where Janicki hopes to make it a sustainable solution that fits the region’s environment, politics and economic resources.

While Janicki acknowledges that there are still several details about the Omniprocessor to sort out, he said he confidently believes  “we are on the verge of a major revolution in sanitation.” After a video of Bill Gates drinking water from the Omniprocessor went viral, Janicki said the machine instantly garnered global support.

“If you take one thing away from my talk, I hope it’s this: If you’re faced with a critical problem that seems impossible, sometimes it helps to step back and rethink how the problem is framed, “ Janicki said. “You may be working on a problem that is framed in such a way that there is no solution even if you’re really smart  …. We have to allow ourselves to think bigger and then have the resolve to never give up. When we put these two things together, we can make big dreams into a big impact.”