How can physicians maintain a balance between essential time with patients and all of the necessary clicks and patient data input required for modern practice? 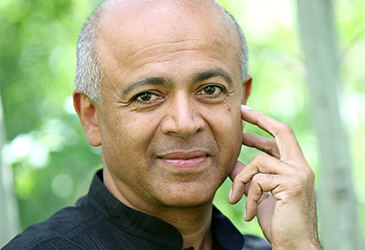 Abraham Verghese, MD, senior associate chair of the Department of Internal Medicine at the Stanford University School of Medicine and New York Times bestselling author, last week spoke to a group of physician leaders about the ritual of the physical exam and the need to reclaim time with patients while keeping pace in the 21st century.

The ritual: How technology is coming between physicians and their patients

The physical exam is a humanistic ritual that builds trust and creates the crucial bond between physician and patient—a bond that is at the core of quality health care, Dr. Verghese told physician leaders at the 2016 AMA State Legislative Strategy Conference in Tucson.

But with rapidly advancing technology, overwhelming amounts of data and burdensome regulations crowding into the exam room, what are the consequences when the computer screen steals physicians’ time from standing at the bedside of the patient?

As a practicing physician and teacher of medicine, Dr. Verghese has found his passion in making sure that not only his students but also the physicians he speaks with around the world remember that the ritual of the physical exam is the most important aspect of developing trust between patient and physician.

“There is something profound in listening to a patient and examining them thoroughly,” Dr. Verghese said.

“I hit on this method with patients while I was in Texas, where I would do the history entirely in one visit and not try to do anything more than hear their story. The average American physician interrupts the patient in 14 seconds,” Dr. Verghese explained as he described a particular patient visit in which he realized the ritualistic nature of the physical exam.

With this particular patient, “I held my peace for the entire first visit, and we agree that the physical would be in the second visit,” he said. “When they came in for the next visit, the patient continued to tell me history, and I decided to just launch into the exam.”

“I began my ritual as I always do with the hand, and a very interesting thing began to happen: This voluble patient began to quiet down,” he said. “I had an eerie sense that I had stumbled onto a primitive dance or ritual in which I had a role and the patient had a role. When I was done, the patient said to me with some awe, ‘I have not been examined like this before.’”

“We began with a partnership toward wellness,” Dr. Verghese said, “and it was only because I had earned the right by virtue of the exam.”

Physicians in the audience were asked to consider the well-known painting, “The Doctor,” by Sir Luke Fildes, commissioned more than 120 years ago to capture the physician in that time. The painting depicts a physician sitting attentively at the bedside of a very sick child, where—as reported historically—he held vigil for two or three nights.

“[The painting] speaks to the Samaritan function of the physician,” Dr. Verghese said. “But what would this painting look like in our time?” Would the physician be facing a computer instead of the patient?

“We have an opportunity that we haven’t had in a long time to move the pendulum back in a direction that speaks to humanism,” Dr. Verghese said. Students must learn how to perform a thorough exam and “remember that patients have both a front and a back … a lot of juicy things happen between the dorsal of the patient and the bedsheets,” he said. The only way to get to those details is through a thorough examination.

And physicians want to reclaim the time for thorough patient exams. With more than one-half of physicians reporting that they are unhappy in their practices, Dr. Verghese said, physicians are fed up with systemic issues that are out of their control and are taking the lead in changing the system by speaking up.

Dr. Verghese highlighted what he believes are the four major consequences of losing time with patients at the bedside:

“Even though they don’t want to,” he said, “[physicians] are forced to spend a lot of their time right here [at the computer].”

The physical examination is a sacred ritual that has been developed and perfected over centuries, and physicians need to keep this ritual protected from extinction. “If we don’t protect and teach this ritual, it will die,” Dr. Verghese said. “At its very nature, the experience of medicine, the experience of being a patient, is very much a human experience—patients require the best of our science, but they don’t stop requiring the Samaritan function.”

“We need a better solution,” Dr. Verghese said. “The Stone Age did not end because we ran out of stones; we found something better,” he said. “Our present hyper-digital computerized age in medicine has to end because there are better ways that can take us back to the patient.”

With such imbalance between patient care and the lack of smooth functioning technology, physicians are actively seeking solutions that better merge technology with patient care.

AMA President Steven J. Stack, MD, sat down with Dr. Verghese for #AHealthierNation interview to further discuss the ritual of the physical exam, what it means to both patients and physicians, and the challenges physicians face in the current health care environment. AMA Wire® will share the exclusive content.