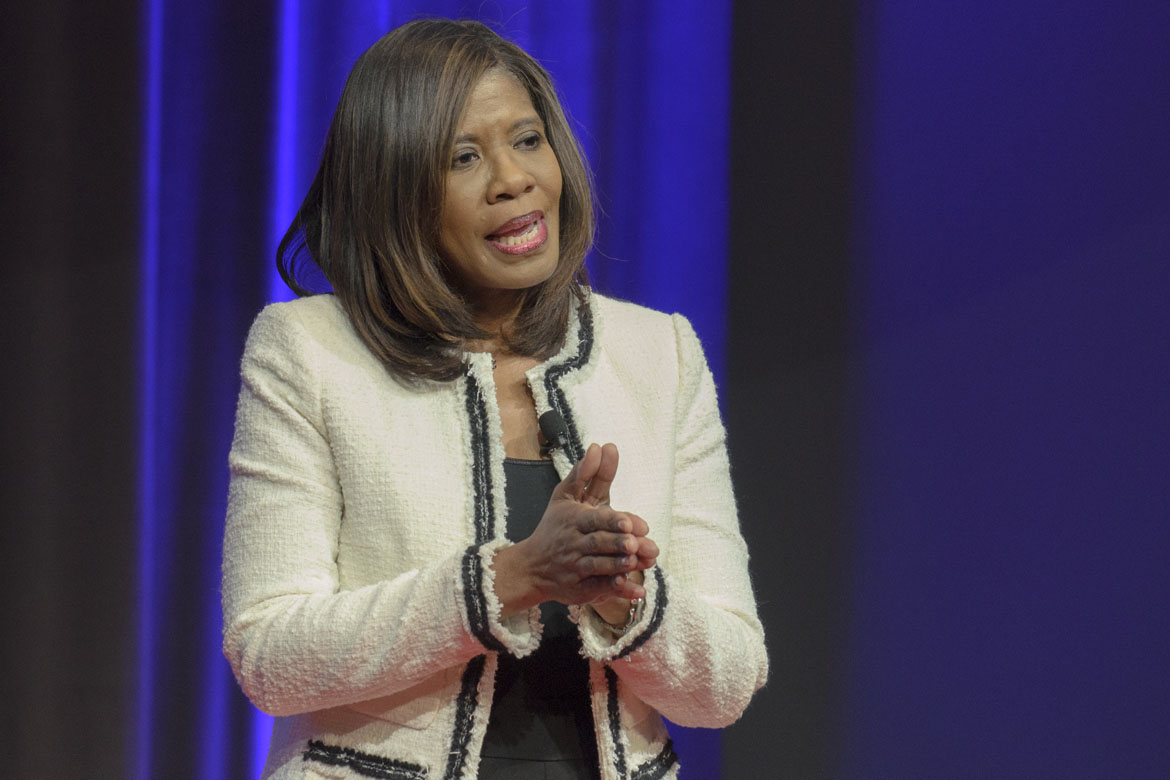 Confronted by the gravity of an opioid epidemic that contributes to the deaths of 91 Americans daily, the nation’s physicians are making much greater use of state prescription drug-monitoring programs (PDMPs), reducing opioid prescriptions, and increasing prescriptions for the life-saving antidote naloxone. Tens of thousands of physicians nationwide are now certified to provide office-based medication-assisted treatment (MAT) for opioid-use disorders, yet there remains a treatment gap that leaves too many patients who want help unable to get it.

These were some of the key points covered by Patrice A. Harris, MD, chair of the AMA Opioid Task Force, during a recent talk at the National Rx Drug Abuse & Heroin Summit. The summit, held in Atlanta, is perhaps the nation’s largest and most influential meeting of policymakers, health professionals, law enforcement and public health advocates devoted to addressing the opioid epidemic.

At the meeting, Health and Human Services Secretary Tom Price outlined a strategy to fight the opioid problem. The strategy includes an announced $485 million in grants to states for evidence-based prevention and treatment activities.

“We are pleased that many of the items on the administration’s agenda for combating the opioid epidemic overlap with steps being taken by the AMA and America’s physicians,” Dr. Harris, also chair of the AMA’s Board of Trustees, said in a statement. “Secretary Price is exactly right that we need to close the treatment gap—driven by demand from people suffering from substance-use disorder yet unable to access treatment.”

Dr. Harris welcomed the funding announcement and said the AMA also looks “forward to full funding of the Comprehensive Addiction and Recovery Act so even more resources will be available to fight the epidemic.”

We should “let credible data and research inform our policies and let it provide insight into whether” legislative and other solutions are working as intended, Dr. Harris said at the Rx Summit. Despite apparent progress on a number of opioid-related metrics, it is unclear, she said, how these changes are translating into the quality of treatment for chronic pain and substance-use disorders.

For example, from 2014 to 2016, PDMP registrations in 43 states grew from 464,698 to more than 1.3 million physicians and other health professionals, according to an AMA survey of state PDMP administrators. Meanwhile, PDMP queries more than doubled during the same period, from 60.7 million to more than 135 million. That increase largely started happening before state PDMP mandates took effect. And, Dr. Harris noted, while the AMA strongly supports physician using PDMPs to help inform clinical decision-making, more work needs to be done to integrate PDMPs into a physician’s workflow.

A PDMP can be a very helpful tool, but by itself, a PDMP will not reverse this epidemic, she said. The challenge that remains on this front, Dr. Harris added, is how to maximize the effectiveness of PDMPs. “How can we move it beyond data points on a page? How can we move the discussion about whether or not PDMPs should be used to one that provides practical, clinical guidance about how they can be used to support patients? That is the discussion we are looking to support.”

“We continue to need our physician leaders on the front line of this epidemic to take the lead in developing best practices to get the most from our available tools,” said Dr. Harris, a psychiatrist from Atlanta.

On prescribing, nationwide there was a nearly 15 percent drop in opioid prescriptions from 2013 to 2016, according to data from Quintiles IMS, falling from 251.8 million prescriptions to 215 million. “Clearly, the message is connecting,” Dr. Harris said. Yet, she added, it remains an open question whether the quality of care for patients with chronic pain is better. Much better research is needed on the effects on patients of new policies limiting the dose and quantity of opioid prescriptions, she said.

More than 113,000 physicians accessed, attended or completed continuing medical education and other courses offered by state and medical specialty societies on opioid prescribing, pain management, addiction and related areas in 2015 and 2016. More than 700 such courses were offered by 49 state and specialty societies. Access to naloxone has soared, with 32,659 prescriptions for the opioid overdose antidote being dispensed in just the first two months of 2017, compared with 4,291 in the entire second quarter of 2015. Nearly 7,000 physicians and other health professionals prescribed naloxone during January–February 2017, a 475 percent jump from the prior year.

Opioid-related morbidity and mortality: What every physician should know

Meanwhile, nearly 38,000 physicians nationwide are certified to provide MAT in the office setting. That figure is up 27 percent in the last 12 months, according to the Substance Abuse and Mental Health Services Administration. More than 30,000 physicians have obtained a waiver to treat patients with substance-use disorders with buprenorphine. Physician organizations led the 2016 effort to raise the federal cap on the number of patients physicians can treat with buprenorphine to 275. That is a “change that will positively impact the lives of tens of thousands, perhaps millions, seeking treatment for a substance-use disorder,” Dr. Harris said.

“It’s great that so many physicians have taken the training to learn more” about treatment for opioid-use disorders, Dr. Harris added. But she noted that only a small number treat patients with opioid-use disorders “and, of those who do, most do not treat up to the patient limit.” There needs to be serious discussion about how to change that, she said.

Only 20 percent of patients who need treatment for opioid-use disorder are receiving it, Dr. Harris said. One barrier is insurers’ use of prior-authorization requirements for MAT, policies which Anthem and Cigna recently agreed to end in separate agreements with New York Attorney General Eric Schneiderman. The AMA has urged other state attorneys general to follow Schneiderman’s lead on the issue.

In her talk at the Rx Summit and during a speech early this month at the annual meeting of the American Society of Addiction Medicine (ASAM), Dr. Harris stressed the importance of physicians working to ensure that laws on coverage parity for mental health and substance-use disorders are enforced.

“Departments of insurance have told the AMA that they don’t receive any patient complaints and, without information, they assume there is no problem,” she said. Physicians, working with their state medical societies, should report problems when they see them so state regulators will take action to improve patient access to treatment, Dr. Harris said.

Another barrier to treatment relates to the physician workforce. According to data highlighted by the ASAM, nearly 2.3 million Americans had an opioid-use disorder in 2015, yet there was only enough treatment capacity to treat 1.4 million. This deficit is part of what ASAM is working to address during the week of April 24–30, which it has dubbed “Addiction Treatment Gap Week.”

During the next five years following the date of the first exam, physicians are eligible to become board certified in addiction medicine without completing an addiction-medicine fellowship. Physicians interested in taking the exam and becoming certified in addiction medicine need to complete the application on the ABPM website by June 30. The exam takes place in several locations Oct. 16–28.

Opioid-related morbidity and mortality: What every physician should know
Address patient shame, stigma when treating opioid misuse
How physicians are taking on Rx drug use in 2015
Featured Stories

What to tell immunocompromised patients about COVID-19 vaccines

Redefining "cause of death" meaning would upend medical liability law

Q&A: How 2 med students stepped up during a mid-air emergency