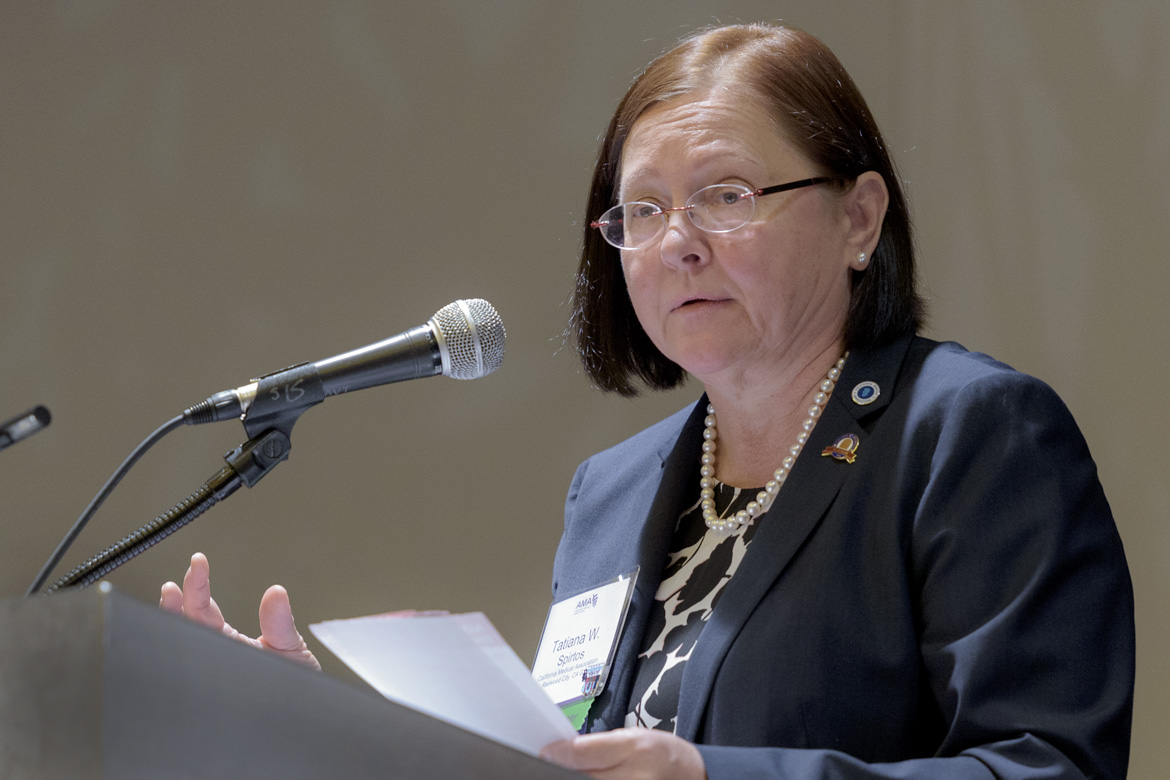 Tanya Spirtos, MD, an ob-gyn and AMA delegate from California, speaks about her experience counseling pregnant patients. There is a code that governs such interactions, she says: "complete honesty."

The U.S. Supreme Court’s 5–4 ruling in a case pitting claims of free speech against patients’ right to transparency regarding care shows how the matter at the heart of National Institute of Family and Life Advocates (NIFLA) v. Becerra has closely divided even the nation’s highest court.

The AMA’s decision to get involved in the case was not easy, but ultimately the Association decided to support the state of California, basing the arguments in its amicus brief on medical ethics and a patient’s right to informed consent. Those intricacies of the case were explored during a session hosted by the Litigation Center of American Medical Association and State Medical Societies at the 2018 AMA Annual Meeting.

Tanya Spirtos, MD, an AMA delegate from California, spoke at the event, and she emphasized that point while telling of her experience as an ob-gyn resident during the 1980s. She said both physician and nurse trainees could opt out of providing abortion services, but the decision to do so did not affect basic obligations to patients.

“There was a code: complete honesty,” Dr. Spirtos said. That meant that, even if not directly involved in terminating a pregnancy, physicians were required to provide patients with honest information about their options for family planning, abortion and referral.

“If you could not provide service, you had to refer to someone who would,” she said.

Pregnant women deserve to get the whole truth on their options

Dr. Spirtos cited a 2015 report from NARAL Pro-Choice America which documented how NARAL investigators visited 45 CPCs in 19 California counties. At 91 percent of the centers visited, NARAL reported that its investigator was told that having an abortion was linked to an increased risk of breast cancer, infertility, miscarriage or depression that results in suicide. Also, 63 percent distributed misinformation about contraception.

She noted that the California Medical Association (CMA) and the AMA both adopted policy on CPCs saying that such entities should disclose information on their websites, in advertising—and before any services are provided—concerning what they deliver in terms of medical services, contraception, termination of pregnancy or referral for such services.

Silva noted that the 9th Circuit Court of Appeals, which ruled against the request for an injunction blocking enforcement of the law, determined that the issue in question was “professional speech,” which is something the state has the authority to regulate.

The three-judge panel’s decision also noted that the professional speech was subject to “intermediate” scrutiny. Under this test, the government must prove its law directly alleviates against real harms—in this case, misinformation given to patients.

While the Litigation Center supported the court’s decision, its brief argues that any law restricting or compelling physician speech and targeted toward a matter of general public debate should be subjected to “strict scrutiny.”

In order to pass legal muster under the strict scrutiny test, the government must demonstrate that a law is narrowly tailored to serve a compelling interest. In this case, the AMA brief argues that statements made on the Pregnancy Care Clinic website and in its court brief establish a compelling reason to require adherence to the Reproductive FACT Act.

The CMA and nine other organizations submitted a separate amicus brief that focuses on the significance of patients’ access to reproductive health care services and the harm that the practices of CPCs could cause to patients and public health.

Among the plaintiffs in the case, the AMA brief highlights Pregnancy Care Clinic (PCC), which is a licensed health care facility where physicians provide medical services. Attendees at the Litigation Center session at the 2018 AMA Annual Meeting were asked whether they agreed or disagreed with the center’s argument in the case, and no one spoke against it.

On June 26, the Supreme Court decided in favor of NIFLA, with the majority majority declining to recognize an exception to the prohibition on content-based speech regulation for professional speech.  In the majority opinion, Justice Clarence Thomas wrote that the California law “unduly burdens protected speech.”