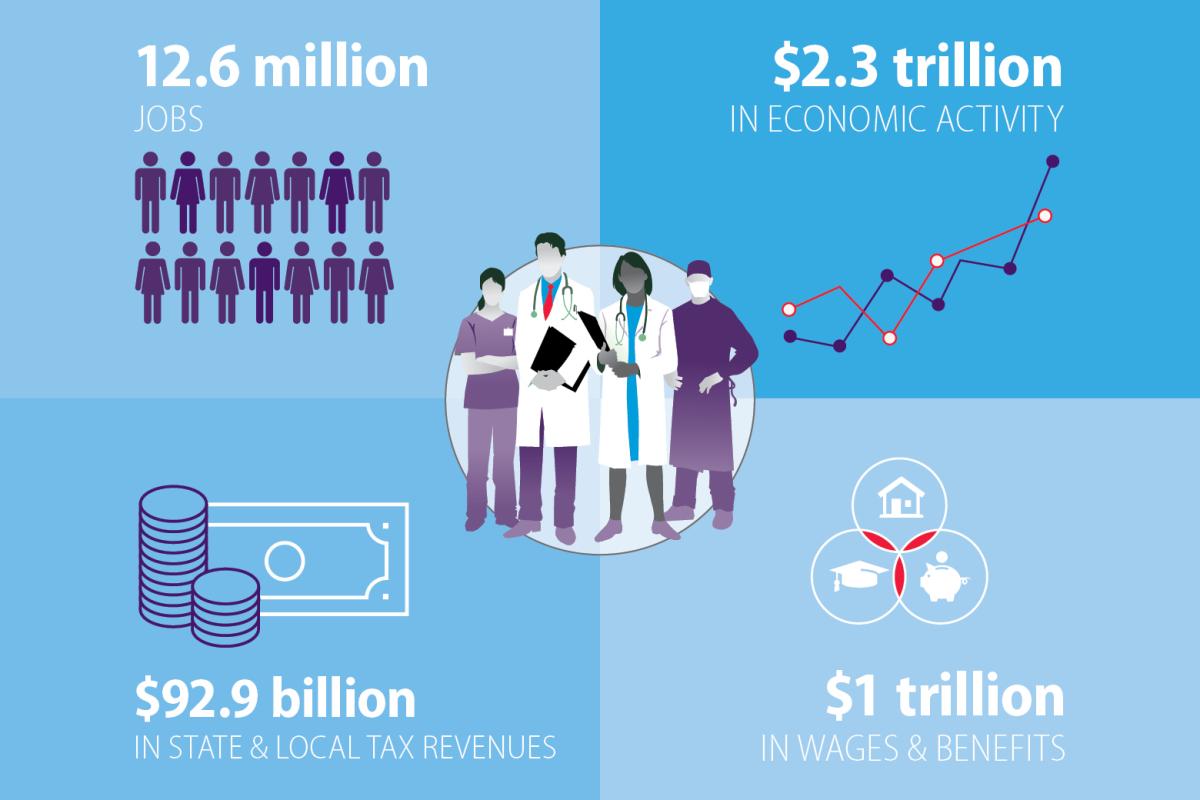 New research details the huge economic impact physicians have across the nation, creating an aggregate $2.3 trillion in the nation’s economy and supporting the employment of nearly 12.6 million Americans.

That wealth of data is contained in the AMA’s latest economic impact report, which provides compelling insights into the jobs, revenues and taxes tied to physician productivity. The report, with in-depth data on all 50 states and the District of Columbia, captures 2015 economic activity of all the nation’s nearly 750,000 physicians providing patient care, regardless of whether they are in office- or hospital-based settings. Explore this interactive map of physicians’ impact across the country.

Then researchers at QuintilesIMS, working on behalf of the AMA, calculated indirect benefits, such as all the business-to-business spending—for example, supplies, equipment and lab services. The report also measures the broad downstream economic activity of induced benefits, for example, when a doctor or staff member spends a paycheck at a local business.

“The positive impact of physicians extends beyond safeguarding the health and welfare of their patients,” said AMA President David O. Barbe, MD, MHA. “The AMA’s economic impact study illustrates that physicians are strong economic drivers that are woven into their local communities by the commerce and jobs they create. These quality jobs generate taxes to support schools, housing, transportation and other public services in local communities.”

Here are the key economic highlights of the report.

Jobs. Physicians supported an average of 182,370 total jobs at the individual state level, which includes their own and other direct positions, as well as indirect employment. Nationally, the total employment figure was nearly 12.6 million.

“Through the care provided to their patients, physicians can have a positive and lasting impact on the health of their patients and the community as a whole. However, the breadth of a physician’s impact reaches far beyond just the provision of patient care,” the study notes. “Physicians also play a vital role in the state and local economies by creating jobs, purchasing goods and services, and supporting state and community public programs through generated tax revenues.”

This is the third such report from the AMA’s Advocacy Resource Center, as part of its mission to support state and national medical societies to work on behalf of physicians. The report is principally used by state-level organized medicine to give concrete evidence of physician contributions to the prosperity of the states as lawmakers and officials make decisions that could affect the practice of medicine.

Previous reports were released in 2011 and 2014, using somewhat different methodology—and physician advocates, especially at the state level, are briefed on the data and are encouraged to make use of the information whenever legislators, officials and thought leaders need to be aware of physicians’ economic contributions to the communities they serve. Medicaid payment, residency funding, legislative changes affecting practice management, and medical liability reform are just a few of the policy areas in which state leaders have effectively used data demonstrating doctors’ economic impact to achieve victories for patients and physicians.