A 26-year-old first-year resident comes to his physician for evaluation. He recently went to the emergency department with palpitations, and an atrial dysrhythmia was diagnosed. The decision was made to start an intravenous infusion of diltiazem, which led to unstable ventricular tachycardia that required cardioversion. An ECG is shown. Which of the following is the most likely diagnosis? 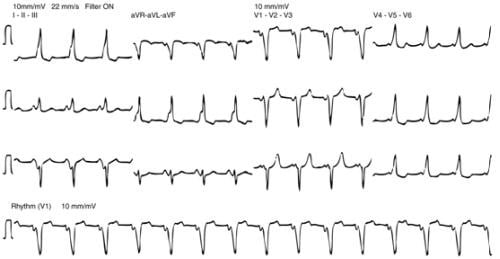 Pre-excitation syndromes present with a short PR segment, a slurred upstroke or delta wave, and a widened QRS complex. The most common of these syndromes is Wolff-Parkinson-White (WPW), where there are accessory connections between the atrium and ventricle as a result of anomalous embryonic development of myocardial tissue. This allows for electrical conduction between the atria and ventricles at sites other than the atrioventricular node.

Medications such as calcium channel blockers (e.g., diltiazem, verapamil), β-blockers, and digoxin can block conduction through the normal AV node pathway, thereby increasing conduction through the aberrant pathway and precipitating unstable ventricular arrhythmias. Amiodarone and procainamide are the preferred agents for WPW patients in atrial fibrillation and rapid ventricular response. 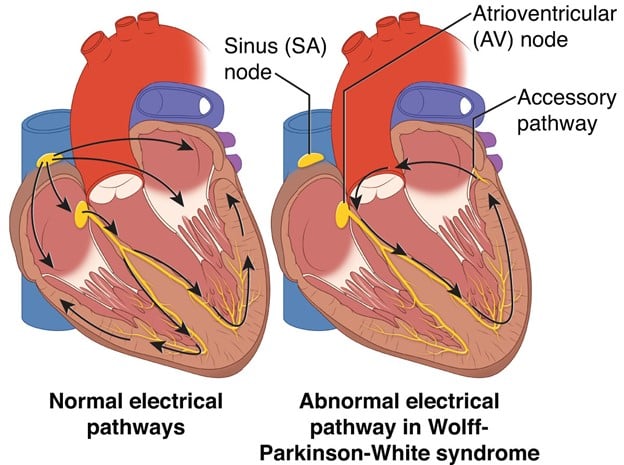 Choice A: Atrial fibrillation (AF) is not a pre-excitation syndrome. AF is the most commonly encountered arrhythmia in clinical practice and is defined by the absence of coordinated atrial systole. Patients with atrial fibrillation will not have P waves nor delta waves.

Choice C: Premature ventricular contraction is caused by an ectopic cardiac pacemaker located in the ventricle. It is characterized by premature, wide, and bizarrely shaped QRS complexes on ECG. It is not a pre-excitation syndrome.

Choice D: Paroxysmal supraventricular tachycardia (SVT) is not a pre-excitation syndrome. It is a tachycardia of sudden onset and termination that originates its electrical signal in either the atria or the AV node. SVT is usually a narrow-complex tachycardia that has a regular, rapid rhythm.

Choice E: Ventricular tachycardia (VT) is not a pre-excitation syndrome. It refers to any rhythm faster than 100 beats per minute arising distal from the bundle of His. The rhythm may arise from a working ventricular myocardium and/or the distal conduction system. VT may cause significant symptoms, such as palpitations, dyspnea, and syncope.